Lots of designers got the message this season. 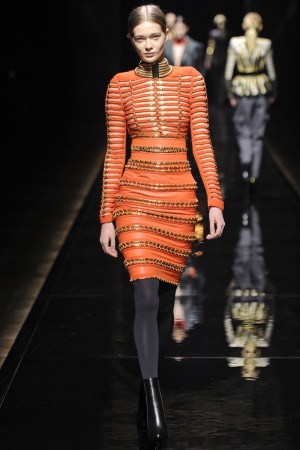 Fashion tried its best to make orange happen outside the confines of the state pen or Netflix’s version of it.

Sunburst, safety orange, saffron—call it what you will, an orange crush consumed runways from New York to Paris, including Carolina Herrera, Prabal Gurung, Narciso Rodriguez, Peter Pilotto, Alberta Ferretti, Sacai and Balmain. And it was not just the proverbial “pop of color”—there were ample examples of head-to-toe use of the bold hue, such as the knit jogging suit at Chanel, which looked great in the Chanel Supermarket and would be a fabulous get-up for a crossing guard.

Rodriguez made the color his show-opening statement, parading it on four consecutive looks. He said it was an evolution of the reds he’s been using for the past few seasons.

“It’s gotten stronger season after season,” said the designer. “This season, we did it in coats that were quite generous, and the stores reacted quite positively to the strength of the color. It looks great with everything.”

Prabal Gurung was inclined to agree. He employed variations on the tone on chunky knits, wispy wrap skirts, statement coats and evening gowns in his lineup, inspired by the Nepalese republic of Mustang, where “orange is a very predominant color,” he said. “It’s almost a neutral there.”