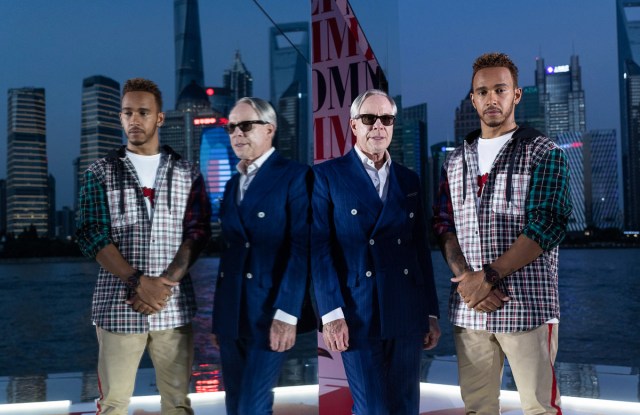 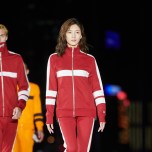 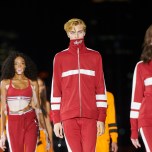 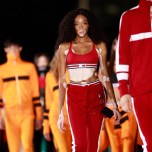 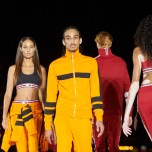 SHANGHAI — It hardly needs saying that Lewis Hamilton is used to speed, but the kind of race it was to get his fashion capsule collection with Tommy Hilfiger instantly into the hands of consumers was a brand new learning curve for the Formula 1 champion.

“My nerves come from knowing how much passion and how hard everyone’s worked, and how much I was able to put into it,” Hamilton said about the first of at least three collections the brand will produce with the English race car driver. “I want to make the brand proud, I want to make Tommy proud. I naturally want people to authentically love it. It’s an exciting nervousness.”

A freshly engaged Hailey Baldwin opened the show, marching out in a red tracksuit from the capsule, followed by the brand’s new ambassador, Chinese actress Maggie Jiang, and the likes of Winnie Harlow and Joan Smalls.

Hilfiger gathered over 1,000 guests at the Port Cruise Terminal on the Shanghai Bund with views of the soaring Pudong skyline, where a Tommy logo had been projected onto a skyscraper across the river.

As with the past four shows under the see now-buy now format — in New York, Los Angeles, London and Milan — all the 112 men’s and women’s runway looks shown Tuesday night were made available for order in sync with the show in 70 countries. This being China, the brand  also partnered with Tmall to ensure delivery within 24 hours to Shanghai and the next-door provinces of Jiangsu and Zhejiang.

In the minutes before the show’s start, previews of the looks were available at augmented reality stations that lined the entrance to the venue, which projected 3-D avatars allowing people to try on the looks and order immediately.

Hilfiger himself said the choice of city was a no-brainer.

“It’s our fastest growing marketplace in the world,” Hilfiger said of China. “We believe Shanghai is one of the most important capitals in the world, and we have an enormous audience in this country.”

Chinese shoppers “are obsessed with brands….They have a big fashion sense,” he added.

The house has great expectations for China — the brand’s chief executive officer Daniel Greider talked openly about doubling the size of the business in the country over the next five years, saying “our market share is growing as we take more direct control of stores in tier-one cities, including Shanghai and Beijing, as well as tier-two cities, such as Xian and Tianjin.”

On the night, the aim was equally as high.

“Empty shelves,” Hilfiger grinned. “We’re excited because people are buying off the runway — we have proof of that…The Chinese consumer is more mobile app-friendly than any consumer in the world. They see it and they want to wear it and, therefore, buy it immediately.”

The designer wasn’t dropping any hints to where the tour may go next, but if market size is any consideration, then Japan, as the second-largest market in Asia, might be a contender. That or India or South Korea, where the brand, it said, is racing ahead.