What’s Coming on the Fall Runways?

Buyers from Nordstrom, Net-a-porter and more are seeing a continuation of minimalism through tailoring and leather dressing, among others for the fall 2020 season.

By Andrew Shang and Thomas Waller
with contributions from Emily Mercer
on February 7, 2020

From Left: Joseph, Bottega Veneta, The Row, and Khaite.

As buyers, editors, influencers, designers, publicists, celebrities, stylists, makeup artists and just plain hangers-on (you know who you are) prep and steel themselves for the marathon of fashion shows ahead and ponder existential thoughts such as: “What should I wear every day to be sure I am photographed?” “Will I get a good seat?” “Where should we eat?” and “How can I be sustainable (or at least appear to be)?,” the most pressing question in advance of the hundreds of shows and presentations that will be held over the next month in New York, London, Milan and Paris is: What will fashion’s fall 2020 look like?

The answer? Pretty much what we’ve already seen.

The men’s wear shows in all of those cities, preceded and overlapped by the countless pre-fall women’s presentations and shows across the globe, have provided a clear roadmap of the fall trends that will be repeated, and amplified, on the runways over the next four weeks.

The key one is a new strain of minimalism exemplified by Daniel Lee’s Bottega Veneta with its subtly twisted take on clean silhouettes — not to mention highly desirable accessories that have become aspirational targets igniting a trickle-down effect felt across various women’s markets and even into the men’s space.

As gender boundaries blur, and in some cases where one creative director designs collections for both men’s and women’s, there’s a continuity and cohesion that creates a united vision for a brand. As evidenced from the men’s shows, trends including leather, elevated tailoring and modern sportswear were among the shared ideas with the women’s pre-fall 2020 collections, accounting for this overall minimalist trajectory.

“In general, things are paring back and there is a ‘less is more’ luxe approach to fall dressing with the influence of minimalism, clean lines, return to suiting, tailoring, as well as neutral tones like camel, ivory, winter whites all having a significant impact,” said Roopal Patel, senior vice president and fashion director at Saks Fifth Avenue, adding: “Having just returned from seeing the men’s fall collections in Europe, it seems there is more in common with the trends and more of the same design aesthetic between men’s and women’s now more than ever before.”

Ahead of what is expected to be a less-than-thrilling New York Fashion Week fall 2020 season — where Tommy Hilfiger, Ralph Lauren and Tom Ford will be absent, along with the loss of high-energy experiential shows from Pyer Moss and Rihanna’s Savage x Fenty — WWD spoke with buyers to ruminate on the trends to expect.

Here, a look at standouts across ready-to-wear and accessories, along with a few crossovers with men’s. 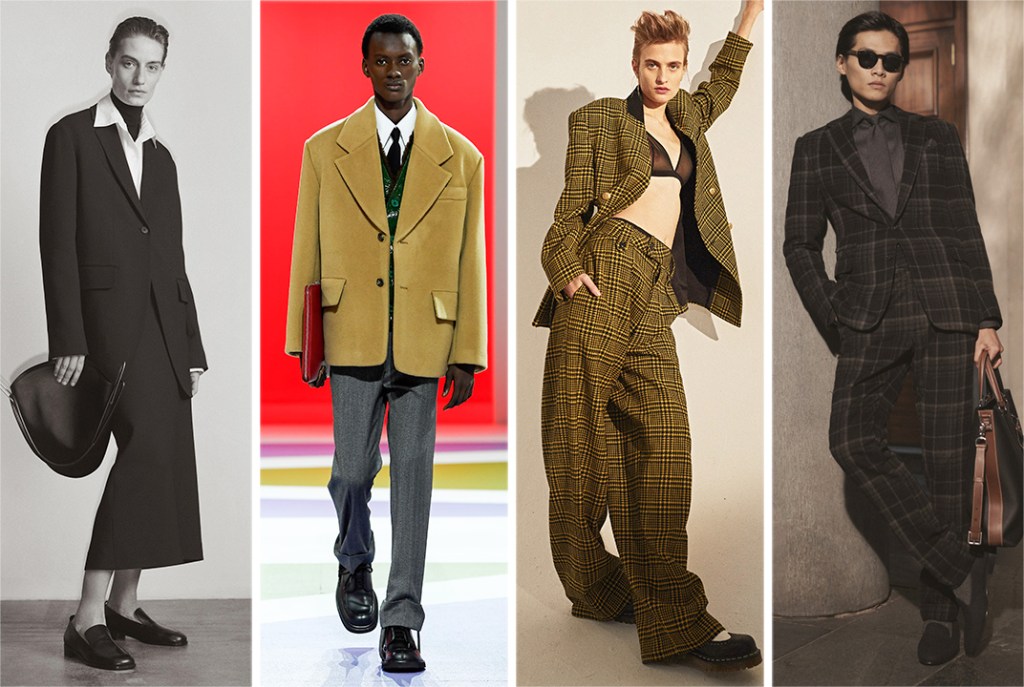 From Left: The Row, Prada, Tre by Natalie Ratabesi, and Ralph Lauren.  Prada by Giovanni Giannoni

A key component to a minimalist wardrobe that is shared between men’s and women’s is that of elevated tailoring.

Elizabeth von der Goltz, global buying director for Net-a-porter, is on the hunt for “the tonal pant suit” for fall, saying: “This trend is not going anywhere, and I predict we’ll see a more refined, sleek version that is beautifully tailored. I also expect to see variations of tuxedo coat suiting.”

In New York, takes on the category range from simply chic, as seen at The Row, to playfully experimental at Monse. 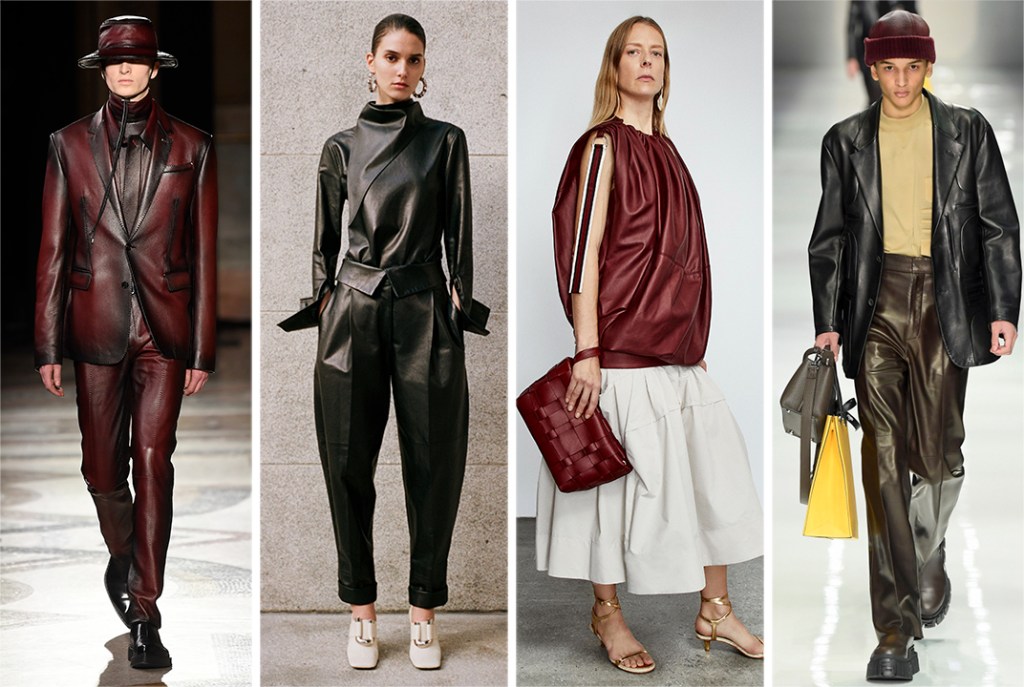 Leather has emerged as the new staple from the men’s runway, with women’s New York brands Tibi, 3.1 Phillip Lim and Nanushka showing strong options in pre-fall both real and faux.

According to Jeffrey Kalinsky, fashion director at Nordstrom, leather is “a real trend that’s picking up steam,” adding, “what’s nice about this idea is there’s some excitement there for the customer to latch on to.” 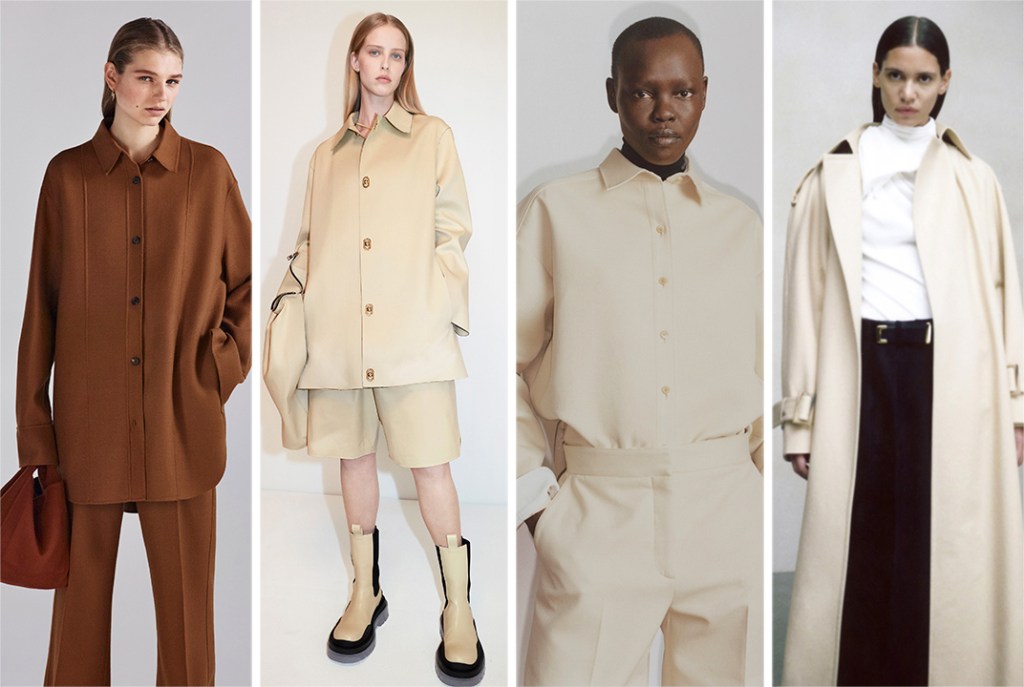 The aforementioned trends easily lend themselves to the return of minimalism, where powerful, simplistic, interesting silhouettes with restrained designs was top of mind for buyers.

“Bottega Veneta has been the key brand recently in terms of clean modern dressing and setting the tone in terms of palette cleansing pieces,” said Liane Wiggins, head of women’s wear buying at Matchesfashion.com.

Patel echoed that sentiment, saying, “Daniel Lee at Bottega Veneta’s influence can be felt at all levels — from designer to contemporary — and very much so in accessories and shoes.”

She name-checked Marina Moscone, Proenza Schouler and Gabriela Hearst as shows to look forward to in New York, along with Catherine Holstein’s Khaite, which is also on the radar of Wiggins and Caroline Maguire, fashion director for Shopbop, who said, “I can’t get enough of anything Khaite — everything Catherine produces is a perfect mix of minimal and directional.”

Kalinsky referenced The Row “because of its clean and minimal take, but also the fact that they’ve proven it to be so successful.” 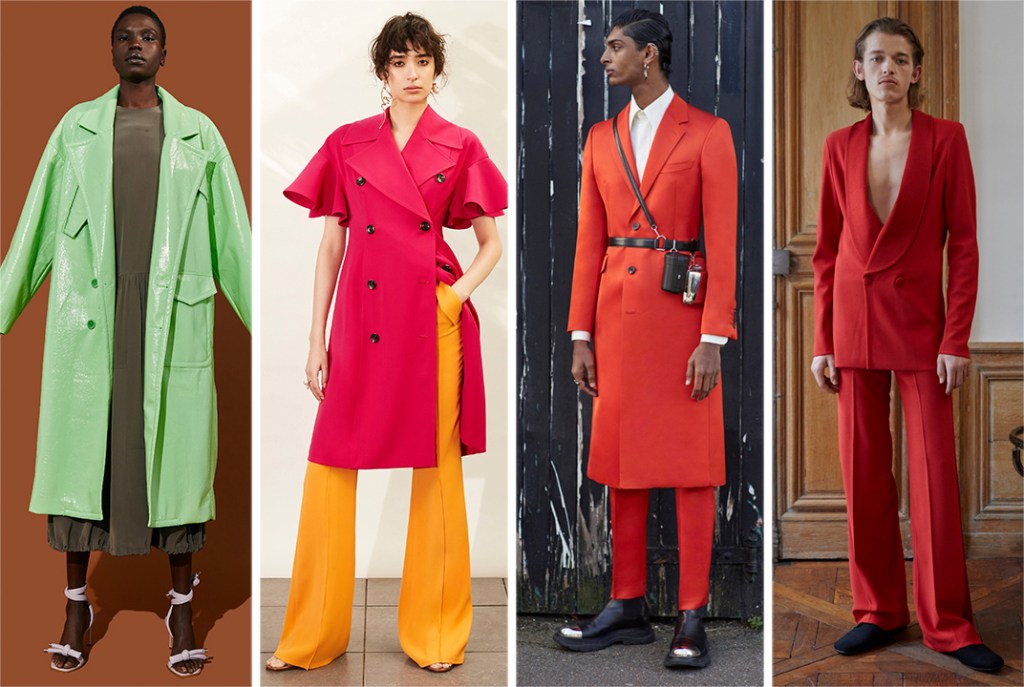 With neutral tones having their moment, it’s to be expected bright colors will inevitably appear for fall, as the color red did in droves during the men’s shows. As reported, Pantone’s top-ranked color for fall is Amberglow, a shade of orange.

Other essentials buyers are on the lookout for include outerwear and knitwear.

“We’ll see a focus on outerwear such as the perfect topper, puffer coats and shearling in luxe fabrics,” said Patel.

“Outerwear will be a huge focus of mine,” said Maguire. “I’m hoping to see men’s wear-inspired outerwear paired with uber-feminine dresses and skirts. I love the idea of moving away from matching sets and introducing more interesting looks by juxtaposing masculine with feminine.”

For von der Goltz, it’s all about “barely there” knitwear. “We’ll see knitwear in bodycon silhouettes, with cutouts or cropped. It is a more sexy approach to knitwear, showing a bit of skin,” she said.

Through all the quiet offerings, there is still a thirst for eccentricity and fun. Kalinsky expects to see “a bit of opulence and decoration in terms of fabrics and embellishments,” while Wiggins is expecting to see “a strong Seventies influence coming through joyous uplifting clothing in terms of colors and textures” while hoping for “more focus on craft and innovative embellishment techniques.” 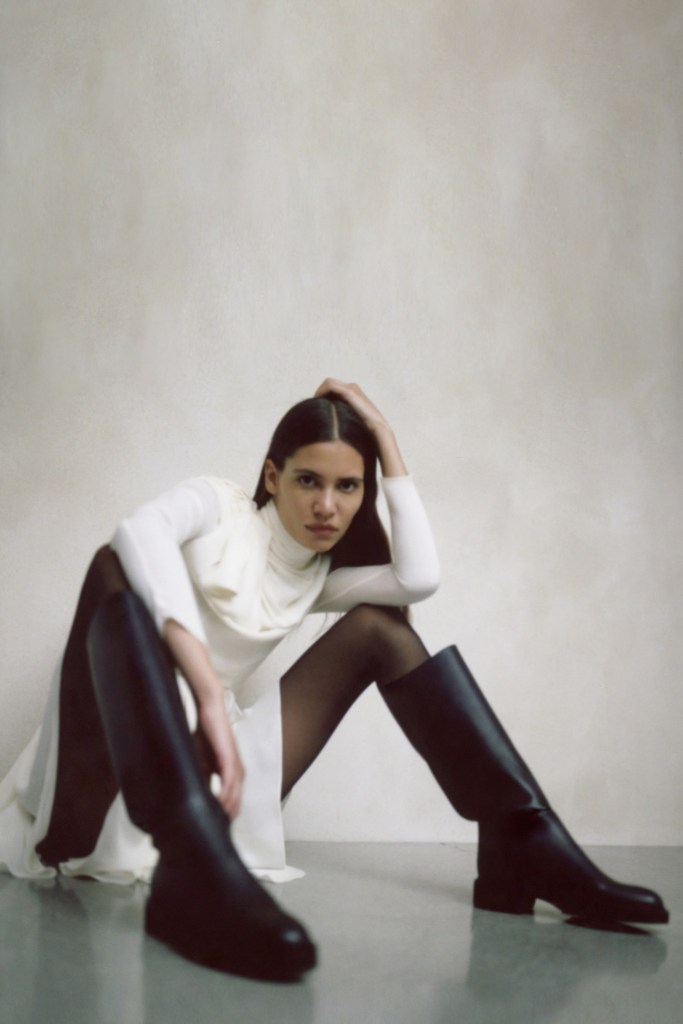 It’s All About the Boot

Unlike Milan or even London, New York historically is low on accessory-based presentations, but seasons past have seen moderately priced shoe and bag offerings from brands like Staud or Maryam Nassir Zadeh — both brands that aren’t doing traditional runway shows this week — gain a lot of buzz and sales on the retail floor.

Every buyer polled explained the piece that they are most anticipating is the season’s boot update.

“Booties continue to dominate, not just for fall and winter. A bootie is a women’s everyday shoe,” Kalinsky explained, saying boots are a big driver of the fall footwear business.

“We are seeing the boot category evolve each season, with the designers really thinking about the wearability and creating different styles for different customers,” explained Cassie Smart, head of women’s wear at Matchesfashion, while Kalinsky added he sees “a continuation of the importance of a boot to the knee,” much like the Celine styles Hedi Slimane designed for fall 2019.

“Overall, boots are getting higher up the leg, which feels more modern and complements what we are seeing in ready-to-wear,” Smart said. “I loved how Khaite styled the riding boot at pre-collection — it becomes a clever option for when women may not want to use a dressy shoe for an occasion.”

Saks’ Patel said her customer “loves the idea of options within boots, whether it is a combat, a knee-high, or an ankle boot, they are looking for newness within shoes, especially as they look for more seasonal options.”

The Row, Alexander Wang and Rag & Bone are New York brands with strong boot offerings, according to Patel, saying each scores well with her customer.

“As pants get slouchier, the boot shafts are wider, while lug sole Chelsea boots are being paired with long feminine dresses,” Maguire said of how she sees customers styling fall footwear.

As tailoring continues to come into focus, Patel widened the shoe discussion, saying that, along with flat boots, she sees her customer looking to loafers to finish off their look.

“We’ve been seeing our customer seeking more of a soft, slouchy shape within handbags, minimal shoes with architectural square toes and also a desire for gum sole boots,” Patel explained, pointing once again to Bottega Veneta’s influence on her customer.

Kalinsky echoed a similar sentiment, predicting “the bigger bag,” similar to the ones shown at Daniel Lee’s spring collection, would be important for fall.

“There are designers in New York that have a really strong accessory business — Proenza Schouler, The Row, Phillip Lim, Marc Jacobs — but we are really looking at Milan and Paris to see the handbag and shoe trends,” Patel said.