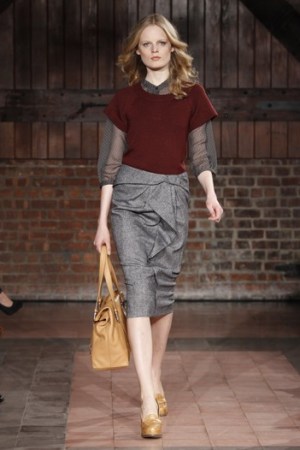 For years now, Banana Republic has shown its fall and spring collections as proper runway shows, often leaving those in attendance to wonder why. Booking the Bowery Hotel and hiring musical duo A Fine Frenzy to perform live, as creative director Simon Kneen did this season, is a very nice idea. But his clothes — an ode to equestrian classics in an autumnal palette — would fare much better in a showroom appointment or an in-and-out tableau-style presentation. They don’t hold a runway (or the inevitable 30-minute wait that comes with it). Nor should that be the mandate, since the line targets a broad audience for whom the flared pants and double-face wool trenches — highlights for fall — are understandable, stylish options for work. That’s not to say there isn’t room for a little flare, such as the cool shearling leather jacket. As for the faux leopard-fur hat and pencil skirts cut a little too far below the knee, they felt like too-forced attempts to be on trend.

Kneen, meanwhile, played it safe with the men’s wear, which he said focused on “getting tailored back on the runway.” Thus, the suits and separates were slim-fitting and done in traditional herringbones and houndstooths. Many of the pieces were layered, with sweaters under blazers and camel hair car coats over plaid shirts. The best looks, however, hinted at the brand’s heritage, i.e. motorcycle jackets and stone khakis.