Fall Calls for Dresses of All Shapes and Sizes

After a major comeback this spring and summer season, retailers and vendors said dresses should keep up the momentum for fall.

By Rosemary Feitelberg and Lisa Lockwood on July 18, 2006
View Slideshow 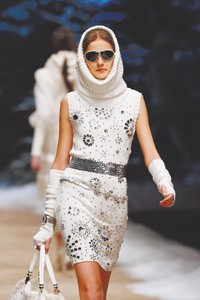 NEW YORK — The dress has been pronounced dead more times than Dracula, only to bounce back to a promising, albeit brief, life.

But this fall, retailers say, the rebirth is for real. After a major comeback this spring/summer season, dresses are expected to keep up the momentum.

Several factors are contributing to the rejuvenation, store executives said. For starters, consumers are tired of casual attire and seem eager to present a more polished image. In addition, shoppers are taking to more streamlined silhouettes after several seasons of flowing separates. They’re also gravitating toward layering dresses over pants or skinny jeans, which stores have singled out as an important fall trend.

And after so many years of sportswear separates taking up the primary position in women’s wardrobes, retailers say women don’t have enough dresses in their lives. They’re viewed as a fresh and desirable option for work, casual events and, of course, social occasions.

“This is the season of the dress,” said Frank Doroff, senior executive vice president and general merchandise manager for ready-to-wear at Bloomingdale’s. “I think the dress business is probably our best business this spring and summer.”

Dresses should be a big category for fall, he said, “but they’ll be worn a little differently with leggings and jackets.”

“There have been “a lot of dresses this season — dresses being very formal or dresses being casual, it’s almost a little bit of mix and match…I think we’re going to see this trend continue.”

Retail analyst and consultant Emanuel Weintraub takes a more contrarian view. “People are dressing up more, absolutely. Men and women are going to work in more stylized clothes and with more tailored looks.” But, he cautioned, “We’re at the peak of the cycle.”

This past spring, stores reported that dresses at all price points — from halters to trapeze, wraps to shirtdresses — were selling briskly and were seen as an easy spring/summer option for work and weekend parties. Jersey dresses were cited as leading the trend.

This story first appeared in the July 18, 2006 issue of WWD. Subscribe Today.

Stores this month report that dress sales remain strong. Retailers feel consumers will be eager to wear a dress with a jacket for fall, and continue with layered looks.

Asked why the dress is hot, Bloomingdale’s Doroff said, “It could be the replacement for the skirt.”

Whether the trend is cyclical or signals a shift in fashion, Doroff said, “We always hope that it lasts a while, but it usually does turn out to be cyclical.”

Michael Fink, vice president, women’s fashion director at Saks Fifth Avenue, said, “Dresses across the board, regardless of price point, have been amazing this season. Donna Karan tent dresses, which looked like they’d be a hard sell, have been great, as well as dresses by Chloé, Bill Blass and Oscar de la Renta.” In the contemporary area, Fink said Saks has done well with von Furstenberg, Milly and Tracy Reese. “Anyone who did a dress, it’s selling,” he said.

Ginny Hershey, senior vice president, general merchandise manager of women’s apparel at Bergdorf Goodman, echoed the bullish attitudes. “The newness for the dress this fall is layering with leggings,” she said. “Overall, the dress has been one of our top classifications.”

“For a long time, fashion focused on the dress, but the consumer was not as receptive,” said Lavelle Olexa, Lord & Taylor’s senior vice president of advertising and sales promotion. “Now all that has changed. The dress business has been phenomenal — and in all types: sundresses, knits, satins.”

Heading into fall, dresses should continue to be a key category for Lord & Taylor, she said. Slimmer, less-embellished styles with wraps or kimonos are likely to help propel the trend. In addition, the dress as a layering piece over pants should keep cash registers ringing, Olexa said. On another front, “the whole continuation of knits will create a strong opportunity.”

“Very sexy silk jersey dresses are great for a summer evening,” Bucciarelli said. “I honestly think the trend will continue into fall. The customer has told us she really loves dresses again.”

Bendel’s shoppers are buying dresses from von Furstenberg, GHITA, Nieves Lavi and Foley. “What would we do without Diane von Furstenberg?” Bucciarelli said. “She really represents the core of our business.”

He noted that dresses are selling from contemporary price points to designer ones. While jersey, which is shaping up to be another fall trend, lends itself to dresses, other fabrics can also fit the bill. “Dresses are a way to feminize men’s wear fabrics for fall,” Bucciarelli said. “Layering dresses over pants is something else that is happening. There are a lot of different elements playing together.”

Christine Hachapellu, fashion director at Paris’ Bon Marché, said spring/summer had been an “excellent dress season. We bought 40 percent more dresses for the season over last year. All of the collections did more dresses. Chloé and Diane von Furstenberg both were smashes in the category. For fall, we think the trend will continue.”

At Scoop, summer dresses “were our number-one classification in May and June,” said Stefani Greenfield, co-owner of the chain. Among the bestsellers were von Furstenberg, Tbags, Ella Moss for Scoop jersey dresses, Ya-Ya, Temperley, Missoni, Tracy Feith and Tracy Feith Le Shack. Key looks include long printed and jersey dresses, as well as halter, strapless and cinched-waisted ones.

“A great dress is hard to find, but when you do, it is an item you want in multiple colors and prints,” Greenfield said. “Dresses have always been an important classification for day and evening, but for this spring, they were a complete standout. More designers are focusing on the dress, designing collections with numerous silhouettes, as a woman never looks more feminine than in a dress.”

For fall, Scoop is getting behind knit dresses and those with cinched waists, full skirts and pencil bodies, as well as shifts, minis and jersey wrapped dresses, with layering. In addition, Scoop is adding a separate classification area in its uptown Third Avenue store called Scoop Dresses where it will keep out only one of a size.

Cedric Charbit, general merchandise manager at Printemps in Paris, said dresses “saved the spring/summer season.” He noted that shirt dresses had been top sellers, and that many women had opted to buy dresses over blouses.

“Instead of a blouse that costs 400 euros ($510), women this season bought dresses at 600 euros ($765),” Charbit said. Tara Jarmon, DVF and Marc by Marc Jacobs had all performed well. D&G, Vanessa Bruno and BCBG had been other top performers.

Charbit said he anticipated that the trend would continue for fall/winter. “The great thing about dresses now is that women can wear them all year long,” he said. “Dresses are becoming our new denim. Men like women in them because a dress is flattering to the bust and hips.”

Dresses also are picking up momentum at Calypso, an international 14-store operation, said owner Christiane Celle, who sells her own signature high-end collection. “After the trend from last summer of the prairie skirt, and layering skirts with tops, women are going toward a much more sophisticated silhouette and much more streamlined look,” Celle said. “The dress is always a feminine item, and women are now more keen on simple lines.”

— With contributions from Robert Murphy, Paris