There will be a new lady in town this fall, and when it comes to accessories, her act is becoming more refined. 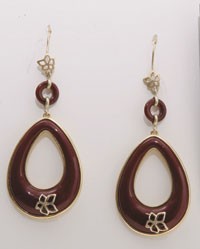 NEW YORK — There will be a new lady in town this fall, and when it comes to accessories, her act is becoming more refined.

“It’s a reaction to the bohemian look, with the big slouchy hobo. People got a little too relaxed.”

Stefani Greenfield, owner of Scoop, which has eight stores in the U.S., concurred: “Things are much more tailored and are much darker. We’ll not see as many big bags.”

Structured satchels were prevalent at other firms, as well. Jones New York offered a doctor’s bag in a soft butterscotch leather with a zipper closure, while Etienne Aigner went retro with a brandy-colored bag with a patch pocket and nickel logo fob, and Calvin Klein had a modern spin on the look with a soft, turmeric suede bag in a half-moon shape, trimmed in black leather and finished with chain detailing at the handles.

Liz Claiborne showed the shape in many of its licensed brands, like Ellen Tracy, Sigrid Olsen and Juicy Couture, but the look was best exemplified in the Liz Claiborne collection by a doctor’s shape done in burgundy patent leather with an embossed crocodile pattern.

Also prevalent at Liz Claiborne were belts, which came in an array of styles, from a wide, woven leather version with a large rectangular leather-covered buckle to a feminine alternative made of rings covered with black ribbon and finished with a black bow.

leather in pewter and clutches with Art Deco-inspired metallic and lacquer closures.

Bags designed from chunky sweater knits were the exception to all the structured styles. Rafe New York featured a series of bags in a heather gray popcorn knit trimmed in black leather, while Chan Luu offered bags, belts and scarves with knitted pompons.

In the jewelry category, retailers are making way once again for chandelier earrings.

“Whether it’s a chandelier or just a big earring, they are an easy look,” said Linda Cohen, owner of Accoda, a boutique in Great Neck, N.Y. “The Oscars personified that, setting the Forties kind of trend.”

“Earrings are back, but they’re denser than before. They’re not flimsy and light,” said Lee Angel designer Roxanne Assoulin.

After spring’s neutral color scheme, retailers are pleased with the return of boldly colored accessories.

“It’s more of a clean look this season,” said Joan Hayman, owner of Blush, a clothing and accessories store in Potomac, Md. “But when there’s color, it seems to be bold. Jewel tones like purple and dark, rich teal are very important for fall.”