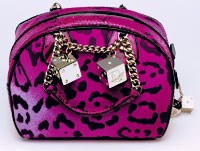 PARIS — It’s a moment of handbag peace, or perhaps just the calm before the storm.

European luxury goods firms typically wage a handbag war during the designer collections here and in Milan, but the recent round of fall shows didn’t give bags the expected front-and-center status.

That’s not to say there weren’t any great handbags shown, but for fall, no clear must-have winner emerged in the vein of Louis Vuitton’s blockbuster Takashi Murakami collaboration a few seasons ago or Fendi’s Baguette phenomenon in the Nineties. Instead, retailers are seeing a move away from iconic pieces and toward several styles that give women a more individualized look. In addition, handbags are starting to face stiff competition for women’s disposable income from categories such as shoes and jewelry.

That said, retailers agreed the handbag business continues to be vital, even as they predict a move away from logos and obvious “It” bags to more individual tastes.

Buyers cited exotic skins, whether real or fake, charm-like decorations, color and extremes in size as key directions for handbags next season. They also identified scores of individual bags as potential bestsellers from some of the biggest names in luxury, with Luella Bartley and Gabriela Corto Moltedo emerging as names to watch.

“Individuality is coming into play more. Women are hunting out a point of difference within their bag selection,” said Sarah Rutson, fashion director at Hong Kong-based Lane Crawford, which is “aggressively” expanding its handbag category.

Still, with many Asian customers buying two or three branded bags per season, she said the trend is toward multiple “Its.” Among her favorites for fall were Marc Jacobs’ bags and Chloé’s beaded half-moon and pocketed snakeskin styles, as well as the entire Luella Bartley collection.

Jonathan Joselove, associate merchandise manager for accessories at Neiman Marcus, said he was pleased by the diversity in styles, “from top-handle framed bags to bowlers to hobos, which will satisfy our clientele, from the Ladies Who Lunch to the career women.”

Joselove also noted the use of bright colors for the upcoming season.

“An exciting evolution in handbags is that, rather than having one must-have handbag each season, the must-have handbag now is chosen from the various collections we house,” he said. “While iconic bags remain important in our handbag business, it is the actual handbag that has become a must-have for our woman, which enables her to further personalize her own style statement.”

“Customers don’t want the same bag everyone else has,” she said. “In a small way, that’s why charms are likely to be so successful. You can customize your bag.”

Among standouts she noted were Prada’s vaguely boat-shaped “Skipper” bag and Balenciaga’s variations on its classic lariat in quirky colors or miniaturized. She also praised Lanvin’s variations on the messenger bag and Marni’s mock-croc styles.

Anna Garner, head of fashion at Selfridges, said she expects fall to be a strong season for jewelry, giving handbags a run for consumers’ money.

“People are more individual at the moment,” Garner said. “No one wants a head-to-toe look.”

“There aren’t so many logos anymore,” said Sarah Lerfel, buyer for Colette in Paris. “It’s more about a signature bag.”

She also noted that bags have become larger and more practical, like Stella McCartney’s travel bag and Celine’s doctor style.

“Logo bags sell less than other bags because they are the hardest to wear,” said Alla Verber, vice president of the Mercury Group in Moscow.

Although she cited a sharp rise in demand for shoes over handbags, Verber said she would expand her bag buy to include Marc Jacobs and Bottega Veneta. Her prediction for winners: Prada’s crocodile bag and anything with color.

Majed Al-Sabah, owner of Villa Moda stores in Kuwait and Dubai, predicted Gucci’s bag with a dragon buckle and a Fendi bag with a frame handle would be “blockbusters.”

Robert Burke, vice president and senior fashion director at Bergdorf Goodman, agreed with the assured success of the Gucci collection.

“The must-have handbags will probably be the Gucci handbags because they’re going to be collectors’ items,” he said.