From Gunter Sachs and Redsand Sea Forts to the Shetland Isles and the Wee Free Church, designers offer a glimpse of their visions for fall. 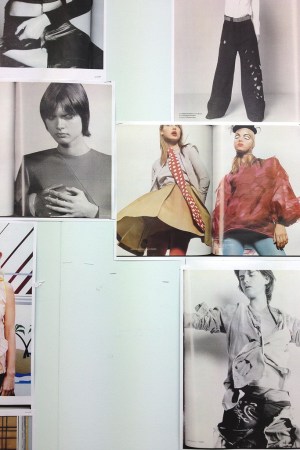 From Gunter Sachs and Redsand Sea Forts to the Shetland Isles and the Wee Free Church, designers share their visions on their men’s collections for fall.

“It’s a continuation of the SS13 men’s collection into explorations of new architectures for men’s wear.”

“Time spent in the Shetland Isles as well as re-watching classic movies like ‘Local Hero’ — a mix of a Texan oil baron and the raw state of the Shetland landscape were the foundations I built the AW13 collection around.”

“This season, we’ve taken our inspiration from the Wee Free Church in the Scottish Hebridean Islands, the idea of Sunday best, kitsch religious icons and household artifacts, and the idea of the fractures and dislocations in a close society that staunch observance of the Sabbath creates.”

“Our brand is founded on a number of great ideas, not least the design and manufacture of Long Johns since the early 1800s. Indeed, Long Johns are synonymous with John Smedley because of this. Of course in the old days the only color they came in was ecru; then in the 1930s the advent of synthetic dyes coincided with the growing new sport of skiing, and colorful Long Johns became part of the John Smedley collections. This season we have taken inspiration from 1930s-1960s skiwear in our own archive and reinterpreted it for the modern gent.”

“I’ve been thinking a lot about the idea of ‘the perfect boring’ and ‘special normal,’ so clothes that are modest and simple, charming, easy, elegant and authentic. I like the idea of creating the perfect wardrobe staples that balance classicism and youthful energy.”

“Park Life, a unique fixture of London life that abounds with a curious, all-consuming life of its own. Exhibitions and exhibitionism, the innocent and the illicit.…It’s an intriguing, inimitable parallel world that rings out with such big colors as the reds of bandsmen’s uniforms, the burnished gold of autumn leaves and the deep purples of hedgerow fruit.”

“Gunter Sachs and his Saint Moritz apartment to David Niven playing the Phantom in the first ‘Pink Panther’ film. From après-ski to private party. Colorful, fun, witty and elegantly stylish.”

“For AW13 it’s again an exploration in how men wear suits; they must be simple yet strong and above all easy to wear. The best design for me is always invisible yet extremely useful. I am always inspired by contemporary architecture — its structure and deceptive simplicity.”

“I’ve had a long-standing obsession with the Redsand Sea Forts off the coast of Whitstable. They were built during the Second World War to serve as defensive gun platforms to help protect London. My inspiration has really come from reimagining these structures for modern life and the garments that you might need to operate there. As always we’re careful to bring the collection into a wearable format but it’s been really interesting to use the Sea Forts as a starting point — so many of our fabrics in the Remade range for this season are really functional and lend themselves towards that environment.”