A live pony onstage, peekaboo tuxedos and a dress covered in Post-its -- the newer set of couturiers provided Paris with plenty of playful gimmicks. 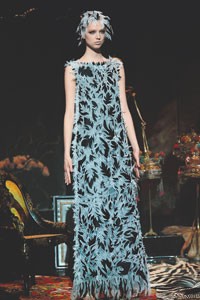 A live pony onstage, peekaboo tuxedos and a dress covered in Post-its — the newer set of couturiers provided Paris with plenty of playful gimmicks. In between them, there were also some utterly understandable clothes.

Franck Sorbier: Over the years, Franck Sorbier has been presenting on the fringes of the couture, quietly cultivating a small client base with his fanciful, yet wearable, confections. This outing, he continued in that familiar key, while adding a dash of exoticism by taking inspiration from the rich aesthetic of French interior decorator Jacques Garcia, to whom the collection was dedicated. Sorbier staged the show in a theater, with models posing on a stage decorated with zebra-skin rugs, tribal art and other offbeat accoutrements fit for an eccentric aesthete. He even brought a live pony on stage at one point, and had another model holding a trio of birds. Though cute, the gimmicks never thoroughly astonished. But the likes of a lace dress embroidered with pearls, a columnar black opera gown or a coat printed with tarot cards were pretty enough to satisfy Sorbier’s loyal customers.

On Aura Tout Vu: Bulgarian design duo Livia Stoianova and Yassen Samouilov are known for their wacky antics. And in their couture collection On Aura Tout Vu, which translates into “We’ve seen it all,” they have outdone themselves. Imagine a dress cobbled together from cell phones (the model even answered a call to her dress) or a floor-length confection printed with postcards and then covered with Post-it notes, leaving a trail of yellow paper in its wake. Was there a meaning to the riot? If there was, it may have been in the messages flashing on the little TV screens attached to a chiffon dress, one of which read: “Comparing the incomparable.” How’s that for communication?

Boudicca: Ten black creations — and one silver dress — presented in a cold, dark room may not seem enough to add up to a successful collection. But Brian Kirkby and Zowie Broach, designers of the British label Boudicca, whittled their essence for the season into that brief — and obscure — statement. That doesn’t mean there wasn’t a soupçon of intrigue in their creations. A clinging lace dress or a puffy-sleeved blouse with a dramatic bow suggested that they gravitate to theatrical gestures. And sharp pantsuits or a jacket with a shoulder sculpted into a rounded form hinted at a talent for silhouettes. But their pensive production left one groping for a full idea of the designers’ voice — especially since this was their Paris couture debut.

Richard Rene: Young French designer Richard Rene, who trained with Jean Paul Gaultier, concentrated his energy on graphic plays on the classic smoking suit. But his versions were full of surprises. A long dress, for instance, when the model pivoted, turned out to be cropped in back, while a seemingly conservative skirt was cut short in back to reveal a pair of patent HotPants. His effort at subversion had its moments, as in a sleeveless tuxedo suit with geometric cutout decorations. And Rene has a way with shapes. But his point of view is still maturing, and one hopes that the best is yet to come.