Design schools are reporting a near-record surge in applications, but jobs in the fashion field are down. 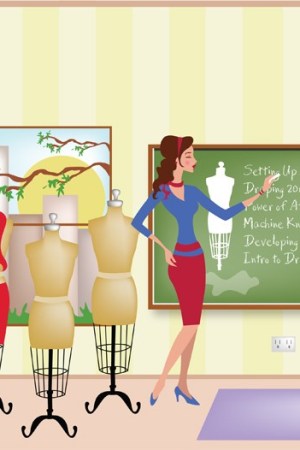 With the fall collections wrapped up and retailers training a far flintier eye on clothes that may or may not sell come September, there is a debate afoot in another corner of fashion, though it is hardly purely academic. Design schools are reporting a near-record surge in applications, requiring deans and faculty to reexamine how to prepare a new generation of designers to enter a field that may not need — indeed, may not even want — them.

The question of how to train aspiring fashion designers is in no way new: Design schools have built their reputations on particular approaches to education, from a freethinking, conceptually based curriculum (as with the School of the Art Institute of Chicago) to a technically focused one that underscores marketability (the Academy of Art University and Parsons The New School for Design, among others). But with jobs rapidly disappearing for industry veterans — let alone freshly minted graduates — and stores glutted with clothes, both art- and commerce-centered programs are scrambling to reevaluate themselves.

Take, for instance, Walter Van Beirendonck, the director of fashion at the Antwerp Royal Academy of Fine Arts, a school noted for promoting an experimental and intellectual design aesthetic. “I have started to add [in the graduate program] several new topics to create a more fluent step into the fashion world,” he says. Those “new topics” include workshops in networking and business development with professionals Van Beirendonck has recruited, including graduates like Dries Van Noten and Ann Demeulemeester, as well as milliner Stephen Jones, set designer Bob Verhelst and stylist Olivier Rizzo. Van Beirendonck says that these workshops have been prompted by the specter of fewer jobs and start-up funds available to students, but insists the school’s overall approach to teaching will not change.

“The fashion program is focusing on creativity and on creating a strong personal designer,” he says. “And the way of [that] working [at Antwerp] is a personal dialogue between teacher and student — almost ‘measure-made’ for the student. A luxurious situation, compared to other fashion schools.”

Perhaps, but Van Beirendonck’s counterparts at other schools insist that the days of turning out strictly creative-minded designers without a serious eye on the bottom line — or their own marketability as commercial designers — are officially over. Which is not to say that these are times for dull fashion; on the contrary, administrators are acutely aware of the need to train students to think in innovative-yet-cost-effective terms. And given the significant increase in applications at these schools, including Parsons, Savannah College of Art and Design (SCAD), Central Saint Martins College of Art and Design in London, the Academy of Art University in San Francisco, the School of the Art Institute of Chicago and the Fashion Institute of Technology (FIT), many faculty speak now of a responsibility to nudge students toward stability, rather than just the runway.

“We are bringing people from the industry into the school to explain to the students all the myriad jobs that they might be able to take on, whether it’s a technical designer or a denim designer, or anything beyond a runway or sportswear designer,” says Parsons’ Simon Collins, who took over the fashion deanship last spring. Collins acknowledges that the balance between providing fashion students with a freewheeling, inspired environment while training marketable designers is a tricky one: “We’re adapting, and I suppose if I had to come up with a snappy one line, it’s really about using this situation as an opportunity to teach students about how to respond to a challenge.” Without specifying whether particular courses would be introduced, Collins also notes that the faculty are “spending a lot of time teaching [students] about the business, and that’s something we’ll certainly be doing more of — helping them understand the nature of the business.”

For some schools, a new attention to the business of fashion has translated to a focus on sustainability, which faculty see as a potentially lucrative, even necessary, next frontier. “We have added more classes and projects focused on sustainable design that goes beyond the world of organics and eco,” says Simon Ungless, director of fashion at the Academy of Art University. “Designers need to know about the life cycle of a product from cradle to grave and the impact that it has on our environment.” At the School of the Art Institute of Chicago, which has an open curriculum that allows students to cross over to courses in different disciplines, the recession had impacted “the realm of ideas,” says Lisa Wainwright, the acting dean of faculty. “As the economy shifts, it will force us all to think about issues of consumption and sustainability, material fetishism, commodity fetishism.” Then there’s FIT, with its tag line, the timely, “where creativity gets down to business.” The school is introducing a program in technical design, which will provide education on production, and is also focusing on special programming, as with a series of panels hosted by FIT’s Executive Women in Fashion.

And lest the applicant uptick be attributed to a recession bylaw — that applications swell as the unemployed choose graduate programs over, well, unemployment — Judith Aaron, vice president for enrollment at Pratt Institute, and her counterparts are quick to note that the most significant increase has in fact been at the undergraduate level. “Our freshmen applications are up 40 percent, which is more applications than we’ve had in 17 years,” Aaron says (graduate applications, she notes, are up 25 percent). At FIT, applications to the college’s bachelor programs were nine percent higher in late January compared to the same time last year, while the Academy of Art University has seen applications for fall 2009 increase by 36 percent compared with the previous year. At Antwerp, Van Beirendonck reports that there were between 500 and 600 applications this year for approximately 60 places in the undergraduate program. Similarly, Anthony Miller, chair of fashion and accessory design at SCAD, reports that the school’s anticipated fall enrollment has increased to the point that he had spent several days in late January interviewing recently laid-off “people from New York” for new faculty positions.

“What’s really been beneficial to the educational system, in a sense, is that there are outstanding [job] candidates available — unfortunately, due to layoffs or closings,” Miller says, adding that graduate enrollment was flat.

Of course, it’s one thing to claim heightened applications now — and another thing entirely for those future fashionistas to show up with tuition checks in hand come September. Matriculation at each of the aforementioned schools for fall 2009 cannot be measured yet, but several administrators admitted that the recession had taken a bite out of their endowments, which impacts the institutions’ capacity to offer financial aid.

“Our endowment has been hit pretty hard, so our scholarship dollars are affected,” says Chicago’s Wainwright, who adds that the school, where tuition is $32,550 per year for undergraduates, is currently looking to re-package financial aid. “Instead of giving five full scholarships, we end up giving 10 half-scholarships. That’s the kind of creative thinking we’re engaged in right now.” (Wainwright notes that 17 percent of the school’s endowment is allocated for student grant aid, though she would not say how much that has been affected by market events.) Financial aid at FIT, which, at $4,500 per year for in-state students, is the bargain of the bunch, is “holding steady,” according to a spokesperson, who acknowledges that the school is “watching carefully and cannot predict what the following academic year will look like.”

Yet with the economic outlook looking increasingly grim, many of the schools’ deans admit to very few tweaks in financial aid. According to a spokeswoman for Parsons, where tuition is $33,700 for a full year and counts 68 percent of its students as financial-aid recipients (that figure includes all departments), there are no anticipated changes to the number of accepted students on financial aid for 2009, while Pratt (full-year undergraduate tuition: $31,700) expects “a slightly smaller percentage of students paying full costs as more families qualify for aid and more international students receive scholarships,” according to Aaron. (Currently about 19 percent of freshmen pay the full cost.) Wainwright, for one, says that the School of the Art Institute has no plans to increase financial aid availability for the fall (currently between 75 and 85 percent of all undergrads receive some form of financial aid).

In fact, there’s a distinct lack of panic among these institutions, perhaps none more so than at Central Saint Martins. “I can hand on heart say [the economic downturn] hasn’t affected us at all,” says Anne Smith, dean of the School of Fashion and Textiles. The logic behind such a boast? A significantly weakened pound, which Smith believes is drawing international students who might otherwise have kept their eye on American programs. Smith did not offer figures on domestic applications, comprised of U.K. and European Union students, but notes that undergraduate students currently receive very little by way of scholarships. “We were very nervous about it, obviously, but in fact [the downturn] has been seen as sort of positive in that we’ve seen an increase in applications and an increase in internships, as well,” says Smith.

Indeed, as companies press pink slips on regular employees, fashion students have become a hot commodity: Internships mean free labor for suddenly understaffed firms, and, in turn, valuable exposure for undergrads. As Parsons’ Collins puts it, “I don’t want to say that the industry is replacing people with interns, because that wouldn’t be possible, but there’s much more work available to them. It used to be getting coffee and sharpening pencils, but now they’ve really got to do things.” That experience may help students get a foot in the door at some firms, but opportunities remain inconsistent; in fact, other schools report some companies that have been relied upon in the past to hire interns no longer need their students, because there simply isn’t enough work to keep them occupied.

All of which begs the question: What will happen to these students after they graduate? While New York Fashion Week saw more than 200 shows and presentations, plenty of the designers behind such efforts will not be back next season, and faculty agree that shedding the patina of glamour that surrounds the designer job title is essential. “We have a number of people [helping with] résumé building, making contacts for job interviews, basically preparing them for an exit,” says Anthony Miller of SCAD. And then there is the tough-love approach: “Even if Barneys buys their collection straight off the runway, that doesn’t make their business,” Parsons’ Collins says. “That makes an order at Barneys. For any business smaller than $10 million, you’re one season away from losing it. We take great pains to teach our students that they can never be complacent.”