Through its partnership with Sustainia, F4D will take part in the upcoming World Climate Summit by staging a sustainability-focused fashion presentation. 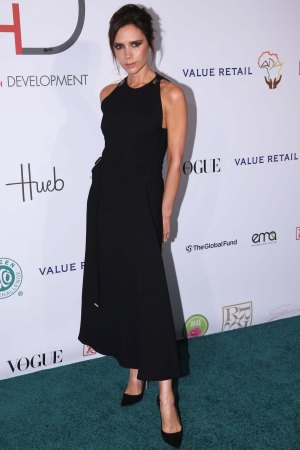 Before the program got under way at The Pierre, many guests clamored for photos with honorees such as Victoria Beckham, Naomi Campbell, Yue-Sai-Kan and Josie Maran, or for snapshots of Diane Kruger, Livia Firth and F4D-er Franca Sozzani. Another source of attraction was Chinese designer, Guo Pei, whose standout gold gown from The Metropolitan Museum of Art’s “China: Through the Looking Glass” exhibition was also on display. Pei also presented a show capped off with a model inching down the runway on stilts hidden beneath an elaborate gown.

Abundant as the fashion elements were, F4D founder Evie Evangelou’s welcoming remarks were rooted in new initiatives. She told the crowd about how Leading Ladies, a cadre of “influential women committed to making a difference on critical issues demanding attention,” will be launched later this year. Italian heiress Beatrice Borromeo who married Pierre Casiraghi in Monaco this summer is expected to be the first to be named.

And through its partnership with Sustainia, F4D will take part in the upcoming World Climate Summit by staging a sustainability-focused fashion presentation. It will also launch F4D Solutions to help designers with sustainable solutions for ethical sourcing in support of fair-trade standards, Evangelou said. F4D has also joined forces with the nonprofit Regions of Climate Change, a coalition of subnational world government leaders and the United Nations, implementing environmentally protected measures that promote strong local economies. On a lighter note, Evangelou commemorated F4D’s fifth First Ladies luncheon, the fifth anniversary of Every Woman Every Child and the UN’s 70th anniversary by rolling out a Sylvia Weinstock wedding-worthy cake.

Before being honored Beckham said, “I’m educating myself and I’m just doing whatever I can do to raise awareness and to try to make a difference.”

After helping to present the designer with her award, Firth noted that the estimated $2.5 trillion global fashion industry employs 60 million people, most of whom are women and “we never think about them when we buy our clothes.” She told the audience which included Queen Rania of Jordan, “They live in misery, work terrible hours, struggle to see their children, let alone send them to school — completely stuck in a circle of poverty.”

“Brands choose the countries that simply offer the lowest wages and the least regulation of labor conditions. The shift toward faster and more flexible production and lower prices has now reached a point that is unsustainable. So today, with your help, First Ladies, let’s call for a transnational agreement on wages and compliance procedures.” Firth said. “Rather than go country by country, we need to unite. It should never, ever be permissible for any company or any brand to exploit women in the name of cheapest production. And states should never, ever be forced to keep wages at an unacceptable level in order to attract and maintain business.”

Noting that First Ladies have the ability to unite to make the transnational agreement a reality, Firth continued, “Today, governments can and must create a conducive environment that enables economic growth while ensuring the social framework that combines appropriate regulation, law enforcement and capacity for accountability. Let countries compete, they have to — but never for the lowest wages and the lowest standards.”

Before Campbell clued in the crowd to her plans to stage a few Fashion For Relief shows next year, she spoke of her acting pursuits. Campbell is heading to Los Angeles to premiere “American Horror Story” and then will be back in Chicago to film season two of “Empire.” On a more serious note, she said, “Others inspire me. I’m inspired every day by something I hear, something I read, something I see, something positive I’m told. Everyone is out there trying to do their bit in their own way. And that’s all we can do — every little bit counts.”

Sam Munshani, president and chief executive officer of Angelo Galasso, told the crow3d of another initiative that will involve setting up a network of F4D-appointed “mayors,” who will recruit luxury brands and companies to commit to sustainable practices. As the “mayor of Madison Avenue,” he will work with Evangelou, to send a memo to select businesses to get involved.

Over the next five years, the aim is to have every fashion and beauty business commit 10 percent of their revenues to sustainable practices. Through Facebook, Instagram and Twitter, the mayor of Madison Avenue will make people aware of what companies are and aren’t doing, and “to shame people who aren’t doing anything.” There are also plans to have similar mayors in London, Milan and other major cities, resulting in 25 in the next two years and an additional 25 annually each year after that. India, China and Africa are other areas of interest.

Munshani said, “Every major city that has a High Street for fashion, and obviously money is available to shop. We’ll be propagating the same concept, ideology and memorandums to companies that are not really big, but in a small environment are still relevant.”

Pei also did her part to help raise awareness, as 20-plus Chinese executives were said to have flown in to see her runway show. Koda described her work as balancing “breathtaking glamour and extraordinarily, intricately developed technique. But of all the significant designers in the world, it is not simply limited to technique. What one requires is the ability to induce the world to dream.”

In talks with a yet-to-be-named New York retailer about selling her customized collection, her profile may increase in the U.S. Although Rihanna helped rocket Pei’s name to fame by wearing one of her creations to the Met Ball this spring, the designer does not expect to collaborate with her soon. “Not necessarily. We, the Chinese, believe if there’s a karma, a connection, then some time in the future, maybe. But currently there’s nothing planned,” Pei said.