Is Fashion an Endangered Species?

Though lip service is given to the importance of the great designers, in reality, serious focus on their work, their craft, has been diminishing for years. 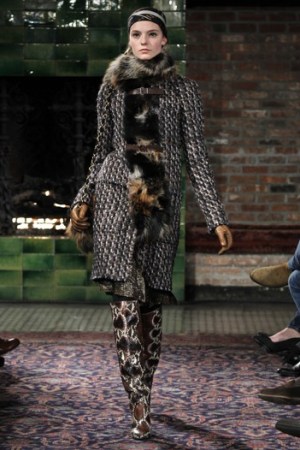 Fashion with a capital F. The kind produced by the masters of the genre, and that used to be celebrated for its artistry, its provocation, its trickle-down influence, the dreams it inspired — has that kind of Fashion joined the ranks of the bighorn sheep and the West Indian manatee? Which is to say, is it endangered?

This story first appeared in the January 12, 2011 issue of WWD. Subscribe Today.

On one level, fashion has never been of greater interest than it is today. The general population is more aware than ever of fashion as a factor in everyday life, in terms of entertainment if not always in the personal sartorial sense. Mediawise, we can’t escape fashion via vehicles traditional and new, including every handheld device this side of an eggbeater. The Web provides instant access to all: live-streamed collections; the minutia of magazine staff moves (“and the latest intern upgraded to the closet full-time is —–!”); endless photos of any starlet in a cocktail dress, no matter how mundane the girl, dress or event. And all this while the blogosphere and Twitter provide platforms for a culture of self-proclaimed critical experts, some apparently knowledgeable and definitely influential in that proverbial high school seizure-of-power way.

It’s hard to argue against such mass participation. Democracy — God bless it. But in fashion as in politics, populism isn’t perfect and can elevate to iconic that based on merit may not deserve hallowed status. Not only has current fashion enslaved itself to celebrity, but in the rush to court favor, anyone who swings slightly more elegant than Snooki (who, by the way, was quite cute on David Letterman on Monday night) is deemed worthy not only of coverage, but of celebration. When was the last time a fashion-centric publication or Web site went tough on a celebrity? Implicit in the cover wrangling is a pleasant, upbeat story to justify the pictures.

Designers are complicit, a notion that will gain credence through the upcoming awards season. Almost surely the actresses garnering the greatest praise in the morning-after postmortems will be those whose gowns were least challenging and most generic, as designers will again prove willing to do what it takes to land their stars, whether or not a specific dress genuinely reflects the brand. True, even the most gorgeous celebrities are real women who want to look beautiful for big nights out. It is not their responsibility to push experimental fashion on the global television audience. But if the threat of yuk-it-up, mean-spirited criticism loomed a little less large, some of them might opt for frocks a little less boring.

Another element to fashion’s increasingly democratic persuasion is the ever-swelling obsession with high-low. Some designers render accessible fashion beautifully. Marc by Marc Jacobs may be the smartest secondary brand ever launched, given its great clothes and a cool factor that can be had — in the form of all kinds of trinketry starting at five bucks and under. Recently, the blockbuster collaboration of Lanvin’s Alber Elbaz with H&M had ample shades of, well, Lanvin. So much so that in a December cover line, Vogue heralded, “The Perfect Party Dress (for under $250!).”

Fabulous for the girl who wants an inexpensive pretty party dress that looks like a much more expensive pretty party dress, and hats off to Elbaz and others for delivering genuine chic on the cheap. Certainly each case taken on its own feels like a meaningful stylistic victory for the nonrich. Yet, at the risk of sounding like a founder of the Marie Antoinette Got a Raw Deal Fan Club, what is the aggregate good for (uppercase) Fashion? In the zeal to court and clad the proletariat, is it becoming no longer PC, or even of interest, to celebrate the levels of research, of design, of intricacy, of detail, of materials (all fabrics are not created equal) that go into high-end fashion? Last time we checked, Fashion was not a social services agency, but a for-profit multibillion-dollar global industry that preys on insecurities about physical appearance. Elitism is an essential part of the shtick.

The devoted high-end customer craves distinctive fashion. Just look at the relatively recent increase of interest in collections such as Dries Van Noten and Rick Owens, once considered on the edge. Yet luxury houses are grappling with issues that impact creativity that have nothing to do with the high-low bandwagon. Given immediate access to fashion show visuals, the impatient public no longer wants to wait months to procure designer merch. Thus, some houses are experimenting with how to satiate the beast and increase speed-to-market. But at what price? For spring, in his quest for clothes that could be produced and delivered on a truncated schedule, Burberry Prorsum’s Christopher Bailey appeared to have watered down his typically intricate, inventive looks.

Such experimentation in timing is inevitable, as luxury houses determine how best to utilize the Web in doing business. One hopes that, in the end, designers will refuse to make creativity a secondary consideration to speed. If a piece of Fashion incites breathlessness, shouldn’t it be worth the wait?

It should fall to the fashion press, both consumer and trade, to fully report on and dissect high-end fashion, both experimental and otherwise. But too often, even the toniest fashion is presented in either a clinical manner or one in which is mere foil for its celebrity subject.

Though lip service is given to the importance of the great designers, in reality, serious focus on their work, their craft, has been diminishing for years.

This is not to suggest that the millions of people who shop at all price points south of designer don’t want and deserve excellent design; that designers in those markets are not often extremely talented; that design innovation only happens at the high end, or that acknowledging or enjoying celebrity fashion escapades is a black mark on one’s sartorial soul.

But in the fray, appreciation for pure, elitist Fashion is getting lost — an argument supported unintentionally right here. This has been a quite gorgeous pre-fall season. Yet in Tuesday’s print edition of WWD, coverage of eight mostly major collections was crammed into three pages, including a visually busy page one, while Rachel Zoe’s fun, contemporary launch merited a nice, airy photo on the cover of WWD Style and a roomy spread inside. And not without reason: It’s a given that Web site tallies of “most e-mailed” and “most viewed” will support that allocation.

Zoe is indeed interesting (and smart, to boot). So, too, brand ambassadors, party girls, teen bloggers, reality stars, “Project Runway” graduates and runway clothes designed with haste rather than haute in mind.

But to lovers of pure Fashion, other matters, too, deserve consideration. On pre-fall alone, why did the usually single-focused Nicolas Ghesquière do so eclectic a collection? Do the gorgeously high-glam lineups of Vuitton and Lanvin presage dressed-up days for fall? Do Phoebe Philo’s patchwork pants for Celine indicate a move away from her signature minimalism? Looking ahead two weeks, what wonders might the couturier set have in store?

More importantly, like the proverbial tree falling in the forest, if Karl Lagerfeld or John Galliano were to show a seminal couture collection — but most people were too wrapped up in the front-row celebrities to care — would it make a sound that lingers?