Is there a line anymore between good and bad taste in fashion? Who sets it, who crosses it and who cares? 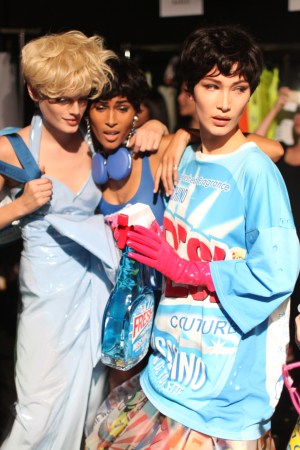 “A little bad taste is like a nice splash of paprika. We all need a splash of bad taste — it’s hearty, it’s healthy, it’s physical. I think we could use more of it. No taste is what I’m against.” — Diana Vreeland
With all due respect to Mrs. Vreeland, the dish has been doused in paprika.

A few things to consider at the top of this story: A month after Olivier Rousteing’s spring 2016 Balmain collection became the most Instagrammed show of the season, his glitzy, price-cut wares for Balmain x H&M caused customers to blithely trample each other for the chance at a $199 dress festooned with green sequins. Instagram celebrity The Fat Jew staged a runway show of “Dad Fashion” during New York Fashion Week. Jeremy Scott is successfully serving up sartorial Happy Meals at Moschino, which might be the perfect example of what Alber Elbaz had in mind when he ended his 14-year tenure of chic at Lanvin in a blaze of glory, damning the state of designer fashion at FGI’s Night of Stars: “We have to become image-makers, creating a buzz, making sure that it looks good in the pictures,” he said. “The screen has to scream, baby.”

No cultural litmus test would be complete without factoring in the Kardashians, whose family values are entrenched in a shared obsession with the manipulation of physical appearance. Even Kim, Kylie, Caitlyn and crew are trumped by the being that might best personify our times: Donald Trump, the legitimate presidential hopeful who has grown no more refined in the 25-plus years since Spy magazine aptly coined him a “short-fingered vulgarian.”

Is fashion, and culture at large, at sea in era of bad taste? The question itself is practically in poor taste in 2015, the age of ultimate inclusiveness, where almost anything that attracts attention is deemed worthy of it. The short answer is: yes, bad taste abounds, but it’s too simplistic to try to parse the vast tide of fashion in such black and white terms.

For the purposes of this article, bad taste is defined as anything overtly garish, flashy, tacky, gaudy or vulgar. Hazel Clark, research chair of fashion at The New School’s Parsons School of Design, says, “It’s true, when we speak about taste, we assume a certain level of refinement.”

“Traditionally, taste has been what the upper middle class said is good, or what the aristocracy said was good,” says director and chief curator of the Museum at the Fashion Institute of Technology Valerie Steele. “It became more egalitarian in the 1970s when the masses said, ‘who are you to say what’s good and bad? I’m going to say what I like.'”

So-called bad taste at a high level is nothing new. Marc Jacobs challenged the perceived style norms when he was at Perry Ellis; Jean Paul Gaultier was a wildly successful provocateur in the Eighties and Nineties. Miuccia Prada began testing the limits of taste with her notions of ugly/pretty in the Nineties and continues to do so. The upper echelons of fashion worship her. The punk and New Romantic subcultures have long since been absorbed into the mainstream.

Yet it’s undeniable that the current landscape is unprecedentedly loud and fast. With so much stuff — designers, brands, merch, marketing — out there, comes the impulse to turn up the volume in order to get noticed.

The conversation inevitably comes back to the Internet age and social media, especially Instagram, in particular in regard to Balmain and Moschino. Rousteing and Scott were not available for comment.

“Social media loves a friendly tongue-in-cheek giggle, which also contributes to designing with the image consumer top of mind, hoping to convert her/him to an actual consumer,” was Bergdorf Goodman’s Linda Fargo’s observation. The general tone of the Internet is humor, so gags get traction. But more than jokes, the Internet is an all-encompassing communication tool that’s all but erased boundaries. References are easily sharable, everyone has access to them, though that doesn’t mean that everyone understands or knows how to use them.

Adam Selman considers John Waters the master of bad taste done well, which requires a level of intelligence. “He’s really educated,” Selman says. “If you don’t know your references, you haven’t read your books or you don’t know history behind something, it can be bad. If you’re being smart about how you can hold a conversation with bad taste, that can work in your favor. At least I hope it works in mine.” Besides his own line, which plays with bad girls and refined tackiness, Selman is known for his custom work for Rihanna, who has undeniably strong taste that runs from raunchy to chic. He is responsible for barely veiling her nude body in a sheath of Swarovski crystals for the CFDA Awards last year.

“You can give people good clothes, but you can’t give them great style,” Selman says. “Rihanna knows how to take things and mix them up and spit them out in an amazing highbrow way. That’s because she’s got great style.”

Pierpaolo Piccioli and Maria Grazia Chiuri’s work for Valentino is of the utmost elegance, but their control over the look stops with the garment.”If you wear something elegant but you’re vulgar, it’s bad taste,” Piccioli says. “It’s not about clothes. It’s about people.”

The designers agree that the age of Instagram encourages a lot of pageantry. “I think bad taste could be to show too much of ourselves,” Chiuri says. “But if you respect the other person, then who cares? Show yourself, why not?”

One can decide to shut out the things they don’t want to see. Unfollow. It’s all a choice.

VFiles, the downtown New York store, showroom and online community, operates under the slogan “VFiles is Fashion Democracy.” Unapologetically contrarian, it runs mostly on the enthusiasm of its users. Its spring fashion show featured the work of five designers voted in by VFiles users. Namilia featured halter tops with illustrated penises and inflatable contraptions decorated with emoji euphemisms for sex. According to Julie Anne Quay, VFiles founder, Namilia does business. It’s part of VFiles’ showroom, and has wholesale distribution. “It’s not Internet-driven, it’s fashion-driven,” Quay says. “There is an appetite for this stuff. People wear it. Yes, the inflatable dresses you wouldn’t wear to the office, but you would wear them to a party and you wouldn’t be looked on as being crazy.”

Suzy Menkes agrees that the hunger for flamboyance isn’t necessarily a matter of Internet and youth culture. “Maybe a clash of civilizations, colors, textures seems more pointed and powerful — in art as much as fashion,” she says. “If anything is ‘out of fashion’ it is traditional beauty — and rigid ‘good taste.'”

Vetements and Céline have cast their shows with models who range from off-beat natural beauties to those who are not considered attractive by any classic standard. Rick Owens continually uses his runway to push the limits of propriety. In January, he showcased his male models’ genitals on the runway. By spinning his spring women’s collection as a treatise on “women carrying women,” Owens seemed to successfully gloss over the fact that many of the models were positioned crotch-to-face. No one called it gross or crude because Owens operates from an elite and polished point of view.

Surely there is a line to be drawn somewhere.

“There are sensitivities around beliefs,” says Clark, “for example, referencing certain religions or faith or images that belong to certain cultures or races.” She notes that Parsons was hosting a conversation about cultural appropriation in fashion, when racially driven symbols can cause offense. That’s a different ball game from wearable penis jokes, which along with glitz and French-fry handbags do not seem to be going away. A reversal is unlikely. Steele says, “I don’t see any chance of that happening right now unless there was some major political change.”