Bright gems, layered on looks, and big and bold stones will dominate the market for spring. Fashion continues to influence the industry, as evidenced by the offerings from designers... 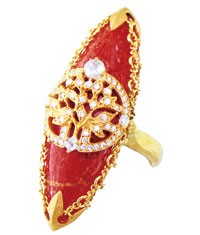 Bright gems, layered on looks, and big and bold stones will dominate the market for spring. Fashion continues to influence the industry, as evidenced by the offerings from designers seen at the recent JA show here.

Vendors and local buyers made the trek to the Jacob K. Javits Convention Center, despite the foot of snow that fell during the first day of the show that ended its three-day run Jan. 25. Attendance was down 32 percent from last year, mainly due to the weather, which caused many retailers to cancel appointments. Still, exhibitors said the regional buyers who did attend were writing sizable orders.

“Bright color is doing very well within our store,” said John Green, president and chief executive officer of Lux, Bond & Green in Hartford, Conn. “It makes it more interesting to someone who’s a frequent buyer. We had a strong Thanksgiving through Christmas season. Business is up from last year in the upper single digits.”

Paul and Sherry McCord, co-owners of Linwood Custom Jewelers in Linwood, N.J., were on the hunt for semiprecious, big and bold looks.

“We’re looking for color,” Paul said. “We sold more color at Christmas than we expected [sales were up 10 percent], so we’re filling in. Last year’s holiday was really good, so if I was even close to it this year, I was happy.”

“Blue seems to be the color,” said Mary Aulde, co-owner of Alberian and Aulde, which showed multistrand necklaces in aquamarine and faceted turquoise stones.

“It’s fashion and color that’s driving the business,” said Janet Goldman, president of showroom and retail outlet Fragments, who was exhibiting at the show for the first time since the recent opening of her uptown boutique.

Designer Julie Baker presented big linear earrings with turquoise, blue topaz, lemon topaz and gold leaves. She said that bangles were selling well because of the trend of layering or stacking multiple pieces at once.

“The market is bursting with color,” said Yaffie Simpson, co-owner of Simpson Jewelers in Brooklyn, who was looking for rings and necklaces, as well as yellow gold.

“Women are now wardrobing their jewelry and a lot of it is interchangeable,” said president Janice Winter. “A lot of necklaces and rings, the layering thing is going strong.”

Winter also reported double-digit growth over the holidays and hoped the momentum, combined with Valentine’s Day, will lead the business well into spring.

Designer Anthony Camargo of Anthony Nak was pleased with the strong response buyers were having to the giant rings in his collection.

“They’re not your typical cocktail rings,” he said. “We call them smoking rings.”

Retailer Jamie Camche, co-owner of JL Rocks, which has two locations in Connecticut, was enthusiastic about the rings and bought Camargo’s new diamond collection for the first time. She expects the addition will boost overall business for spring and was not nervous about the higher-priced merchandise which will retail from $3,000 to $100,000.

“We’ve trained our customer,” she said. “They view [Camargo’s] earrings like collectibles, so they overlook the price point.”

Despite a push from designers toward new silhouettes, like the multistrand necklace or cuff bracelet, it’s clear that consumers are still responding to big earrings and rings that have been trends the past few seasons.

“Women are still looking for big earrings,” Camche said. “That’s the number-one category for us.”

As for overall business, she admitted that September and October were flat, but sales picked up for November and December.

One challenge facing many American buyers is the strength of the euro against the dollar. Purchasing from European firms is more costly and many retailers can’t afford it.

“We buy a lot of Italian vendors, but unfortunately the exchange [between the dollar and the euro] is so bad,” Fleishman said. “We’re still buying, but definitely a little less.”

Italian firm Valente Milano has tried to absorb costs to maintain its pricing, according to export manager Barbara Scheraggi. Still, she said, “It’s a problem for us as it is for everybody. We are trying to hold on.”

Retailers familiar with the brand responded to its violet jade rings and fossilized bone pieces with colored sapphires. There was a clear marine motif with fish and conch shell shapes being key.

Jewelry company Aaron Basha will have to implement a price increase due to European production costs, said marketing director Sasson Basha. Still, he added that last year’s sales were a record high. This season the firm included fish, dolphins and turtles in its ever-expanding collection of charms.

Temple St. Clair also took cues from oceania and unveiled a collection filled with starfish pendants and blue moonstone clusters. Buyers reacted well to the line, St. Clair said, and the market seems to be healthy.

“There were a lot of new stores opening in new places and people seem to be expanding their stores,” she said.