The fashion industry responds to the election of the new president of France. 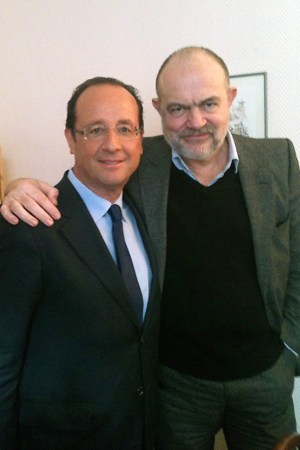 PARIS — Pierre Bergé and Christian Lacroix were among the thousands who congregated at Place de la Bastille here Sunday night to celebrate the election of François Hollande as the new president of France.

“I can’t hide my relief and happiness,” said Lacroix, recalling that during the last Socialist regime of François Mitterrand, who served from 1981 to 1995, couturiers were invited — via then culture minister Jack Lang — to meet with the president. “No government helped fashion so much than the Socialists at that time.”

By contrast, Lacroix noted that his house sought protection from its creditors under the UMP government of Nicolas Sarkozy, toppled Sunday night as voters voiced anger at his handling of the economic crisis. “How tragic-comic was the government in 2009 when the couture house fell into French Chapter 11?” he asked. “I am sure they had good intentions, but egos and politics were stronger than workers’ future.”

Lacroix said he supported Hollande since the primaries, appreciating his comportment, honesty and convictions. “I do expect a more humanist way of governing: courageous, fair and, above all, creative and innovative, without any fatalism. I do think things can be seen and managed another way,” he said.

“I think this change expresses above all a breath of fresh air, and that brings energy,” agreed designer Bouchra Jarrar. “It’s a new hope for France.”

Jarrar held out hope that the government would recognize that the fashion industry has suffered from globalization and outsourcing — a hot topic during the campaign. “Of course it’s necessary to open up to the world, but it’s also important to nourish and develop what we know how to do well,” she said. “Since I opened my fashion house, one of the key points was to ensure that my ready-to-wear and couture are produced in France.”

Some of Hollande’s suggestions aired during the election — a 75 percent tax rate for salaries above 1 million euros, or $1.3 million at current exchange, plus a special tax on luxury goods — could have wide business implications.

According to sources, executives at LVMH Moët Hennessy Louis Vuitton and other CAC 40 firms have held internal discussions concerning relocating certain operations to London or Brussels should the tax hike come to pass, which would make it difficult to attract and retain talent in France.

However, observers noted that Hollande won under 52 percent of votes, hardly a compelling mandate for wholesale change.

“As a triumph, it’s quite modest,” said Karl Lagerfeld, who is taking a wait-and-see approach to the change in leadership.

German-born Lagerfeld, a resident of Monaco, does not vote in France and said he prefers just to observe — which he did via a series of wryly funny cartoons published by French Elle and recently compiled in a newsletter by one of Lagerfeld’s favorite Paris bookstores, Galignani.

In one, Sarkozy and Hollande are depicted locked in a tussle in a boxing ring, with National Front leader Marine Le Pen as referee. Lagerfeld noted he recently dashed off a few new cartoons for German newspaper Frankfurter Allgemeine Zeitung, including one depicting Hollande as an 18th-century gentleman offering a flower to German Chancellor Angela Merkel, who queries, “I hope this rose has no thorns.”

Lacroix described her as a “French beauty” who is elegant and discreet, and likely to avoid “all the tricks of fakeness.”

To be sure, Hollande portrayed himself as a “normal” person during the campaign and was pictured shopping alone at a supermarket, toting a bright green basket. The contrast with Sarkozy was striking — he was anointed the “bling-bling” president for his flashy lifestyle, model wife Carla Bruni and dalliances with billionaires including Bernard Arnault.

Trierweiler, 47, may well become a new, albeit low-key style icon. A former political journalist who has worked for feisty magazine Paris Match for about 20 years, she is reported to have styled herself as the antithesis of “bling” on the campaign trail. Her trademarks include trenchcoats, dark sunglasses to shield sensitive eyes, scarves and a Gerard Darel 36 Hours bag.

Jarrar said she appreciated Trierweiler’s discretion during the campaign. “To me, that’s a sign of elegance,” she said. “As for her style, she makes me think of a heroine in a Claude Chabrol movie. She has an air of Marie-France Pisier, which pleases me a lot and could inspire me.”

Investors were more interested in what the challenge to the status quo in political Europe meant for the global economy.