“In our industry, we have very few heroes,” said Alexander Vreeland, luxury fashion veteran and grandson of the late Diana Vreeland.

One would be hard-pressed to pinpoint the beginning of that “moment.” The legacy of the woman whose zingers include “Unshined shoes are the end of civilization” and “A little bad taste is like a nice splash of paprika”—and who once fired a Vogue staffer for making too much noise when she walked (“I can’t stand the vulgarity of a woman who makes a noise when she walks”)—is certainly etched into fashion history.

But perhaps the recent iteration of this moment started with the 2012 release of The Eye Has to Travel, the documentary directed by Bent-Jorgen Perlmutt, Frédéric Tcheng and Alexander’s wife, Lisa Immordino Vreeland, and then continued in 2013 with a slew of devoted books, including Diana Vreeland Memos: The Vogue Years (edited by Alexander) and Empress of Fashion: A Life of Diana Vreeland by Amanda Mackenzie Stuart.

Last fall, Alexander launched Diana Vreeland Parfums, a five-scent collection that also includes body creams, candles and travel sprays, available at Dianavreeland.com, Bergdorf Goodman, Neiman Marcus and Colette, among other locations. In February, he introduced a new scent to the mix, Smashingly Brilliant, inspired by Diana’s love of the island of Capri, and this May comes the debut of Daringly Different, which balances floral notes with smoky facets of oud. And during the 2015 Academy Awards in February, fashion illustrator Donald Robertson—perhaps better known by his Instagram handle, @drawbertson—brought Vreeland to life in a series of drawings for Harper’s Bazaar, wherein he reimagined Diana at the present-day Oscars ceremony, mingling with A-listers. 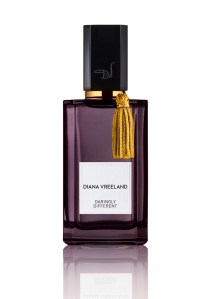 During the fall collections, Vreeland’s legacy was once again thrust into the spotlight at Marc Jacobs’ show at the Park Avenue Armory in New York. The designer tapped Stefan Beckman to design a backdrop for the walls, which were draped in floor-to-ceiling hand-painted canvases inspired by Jeremiah Goodman’s watercolor painting of Diana Vreeland’s famous living room: what she dubbed her “garden in hell.”

“I thought that’s exactly what fashion is; this paradise that is sort of hellish in a way,” Jacobs told WWD. “You pay for your sins and then you sin all over again. You love it until you hate it; you hate it until you love it. That obsession, compulsion, pleasure, pain principle.”

Jacobs described one look in particular—a black sweater with black pants and crocodile boot—that was a pastiche to Diana herself. But he said overall, it was the collection’s “polish, the finish, the fastidiousness” that was most Vreeland-esque.

“I think people have their own personal relationships with my grandmother and what parts of her life and work inspires them,” Alexander said. “Not only designers, but also photographers, advertising executives, people in creative worlds. She speaks to them.”