Pierre Cardin, Christian Lacroix and Clare Waight Keller were among attendees at the fashion display.

By Mimosa Spencer and Jennifer Weil on January 23, 2020
View Slideshow 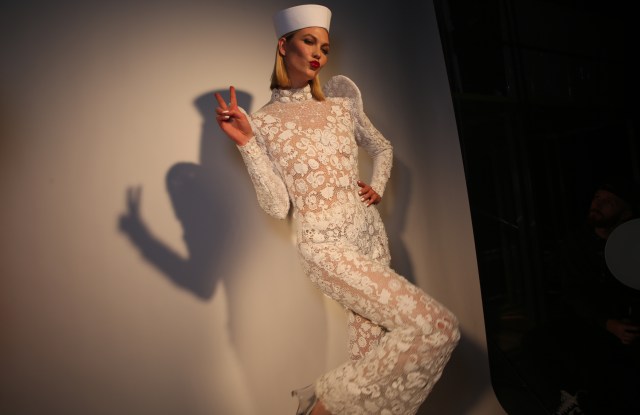 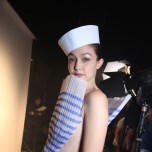 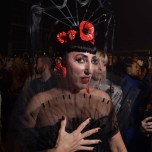 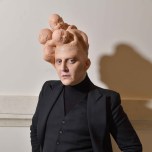 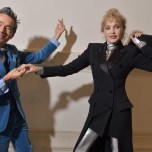 They turned out in droves, dressed to the nines. Models, performers, designers and fans paid tribute to Jean Paul Gaultier at the couturier’s 50th anniversary show in Paris on Wednesday night at the Théâtre du Châtelet, marking the end of his runway career:

Pierre Cardin: “I am very proud to have had a student of such quality who had a brilliantly successful career while having such character.”

Christian Lacroix: “I felt great happiness and pleasure — I loved the handiwork, there was also couture and showmanship. We could see he’s in fantastic shape, and that he’s very happy about this step and about what will come next — I think.” Asked what he knew about the next steps, Lacroix replied: “There are certain scenarios we can imagine, but I think he’s taken the right path.”

Clare Waight Keller: “He is an icon in France, one of the most incredible designers known globally — I think not only through his work through Madonna, but just his extraordinary personality. He was the guy I grew up knowing when I was in school in fashion, so I am super excited to be here.”

Kenzo Takada: “He did so much for fashion, Paris and France — I feel very honored and so lucky to be here for his last fashion show.”

Gigi Hadid: “His show was my first in Paris when I was 17, and it was his last ready-to-wear collection. It was so exciting for me. I couldn’t believe that a designer like him wanted me on his stage. So it’s really special to be back for his last couture collection, as well. He’s inspired me my whole life — I mean, the same as everyone. Just his creativity and his joy, and everything that he outputs from himself is just amazing. But also I have a Roche Bobois couch at home that has a few cushions that are his fabric designs, so he’s always with me at home, too.” 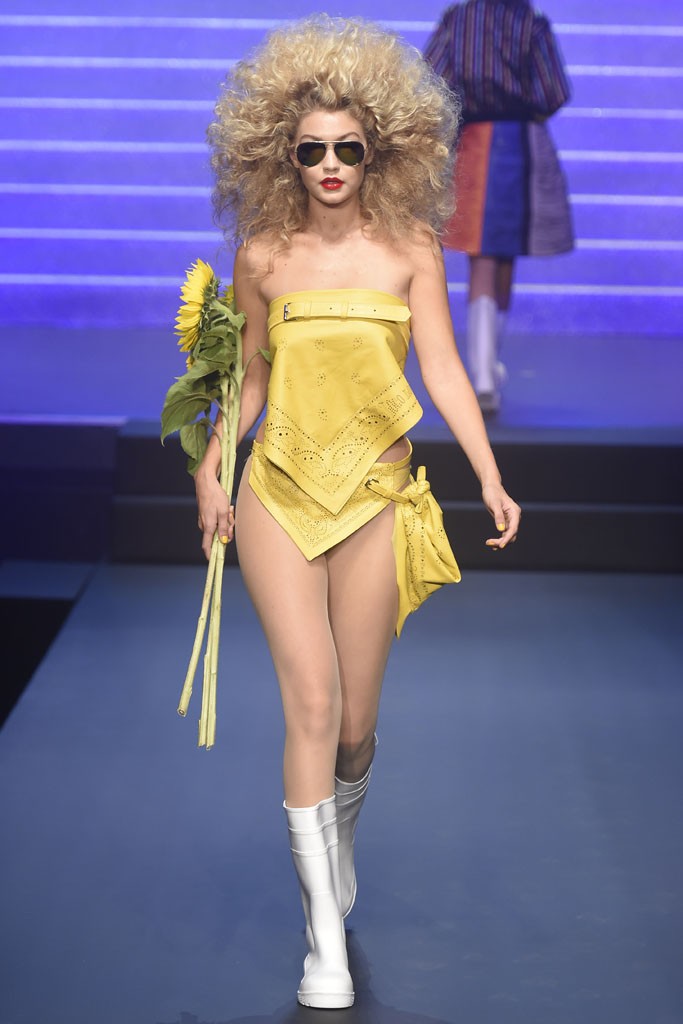 Ellen von Unwerth: “I used to model for Jean Paul, when he started. One of his first shows he booked me. I remember what I was wearing: a black garbage bag with a belt and sponges to scrub pots with were earrings. That’s a really good memory.”

Rossy de Palma: “I am [too] moved to talk,” said de Palma backstage before the show, adding she’s known Gaultier for almost 50 years. “Like the end of the Eighties, the beginning of the Nineties. I don’t know but it’s a loooong, long, long time ago. A life of friendship.

“He saw me in ‘Law of Desire,’ the Almodóvar film, and called me quickly for the first show I did with him.”

Erin O’Connor: “I was hooked in about nearly a quarter of a century ago. [Jean Paul Gaultier] was described to me as ‘The Wizard of Oz,’ and the person that told me that couldn’t be more wrong. He’s the most human person in the world. I think his power is his expression, but it’s also his humor and kindness. He really is, I think, someone that has provided real DNA and backbone for fashion.”

O’Connor reckons she walked about 100 of Gaultier’s shows. “There was one when I jumped into a paddling pool. He is the only designer that got me in swimwear, that’s for sure. 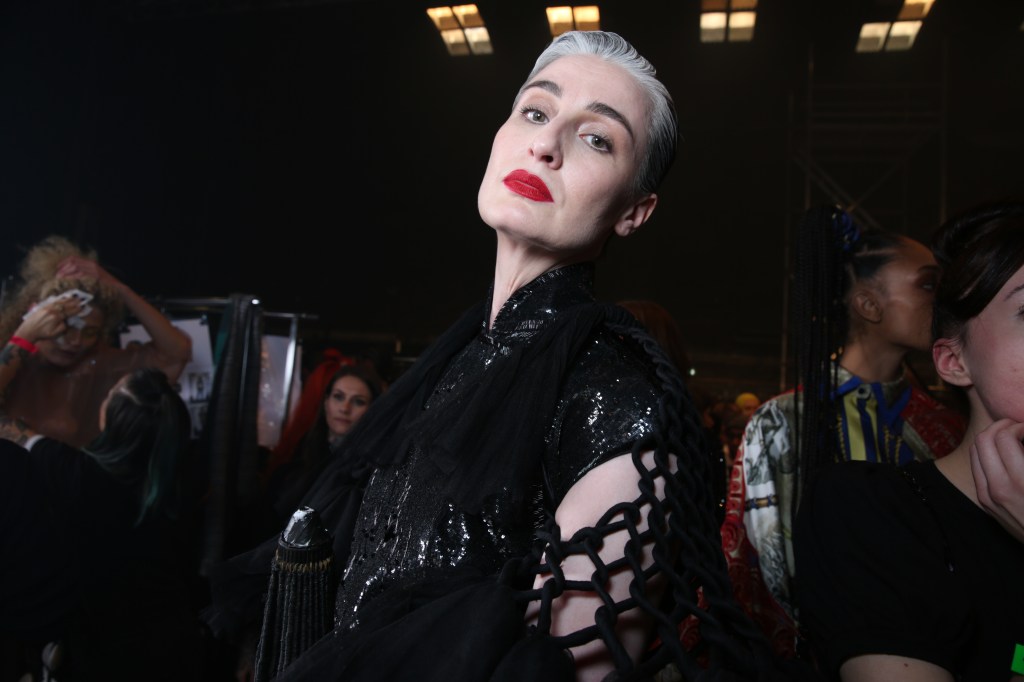 Pascal Morand: “Jean Paul was an exceptional fashion designer who has deep knowledge of all types of couture techniques and was a precursor in subverting codes, like male/female ones, who brought in impertinence and humor, and who understood very, very early on the importance of diversity of inclusivity and is therefore an exceptional figure, and an icon of fashion.”

Ali Mahdavi: “I have great, great admiration for this house. He is probably one of the last to know and love the woman’s body and not distort it with bizarre forms….Monsieur Gaultier, he beautifies women — and this is not the end. It is the beginning of a new adventure.” 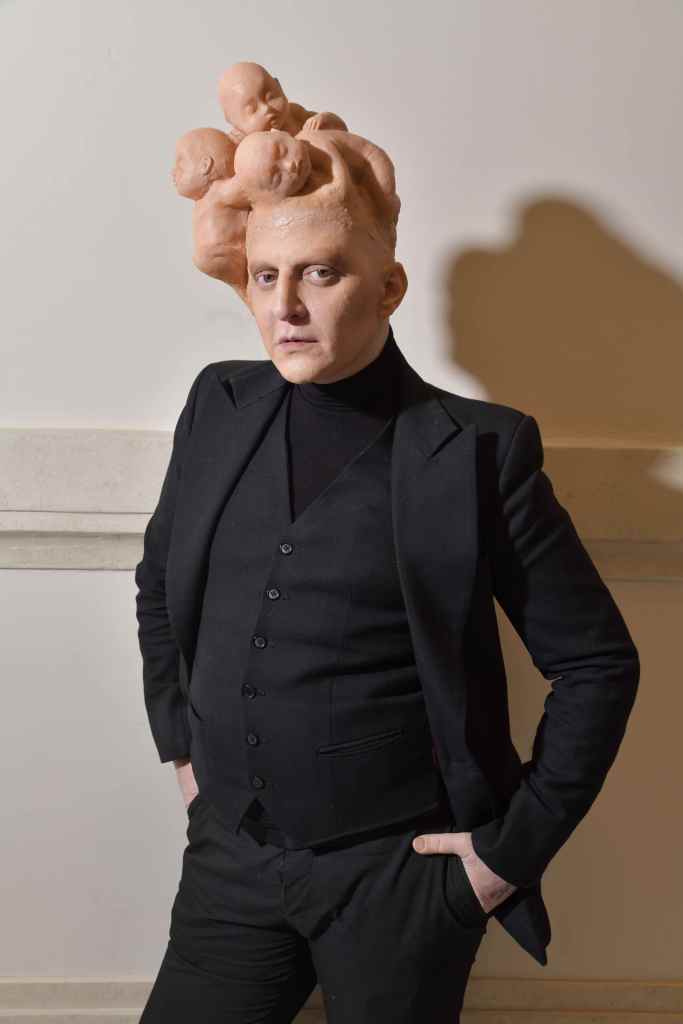 Andrés Velencoso: “I was one of the lucky ones to do two of his campaigns, prêt-à-porter and one of these iconic perfumes, the Fleur de Mâle — he’s such a great man and such a warm person and I’m super happy to be here.”

Eva Herzigová: “For me, Jean Paul is someone who is so much fun — he’s extremely fun, he’s intimate, he’s a lovely person, a gentleman. His creations will become more exclusive — he’s just going to a more exclusive universe — why not? He’ll continue! The show will go on!”

Isabel Marant: “I’m delighted for Jean Paul and very sad to know it’s the last runway show, but there you go — we will miss them. His was one of the first shows I saw when I was an adolescent, and dreamed about going — and managed to sneak in from the back. It’s pure joy, it’s eclectic. Jean Paul Gaultier represents a lot of things for me.”

Arielle Dombasle: “This is not an end at all, he’s going to tour around the world and show his things differently — we are happy. I wore Gaultier in this very setting here at Châtelet when I did my glamour show with Philippe Katerine with hoops and crinolines — so this is all very moving.”

Jourdan Dunn: “When I was 19 and eight months pregnant, I got the phone call that he wanted me to be in his show. I was a bit like ‘Wait, is he aware that I’m pregnant and there’s been a bit of a backlash?’ Then his team came back [with] ‘No, he loves that. He thinks it’s a beautiful moment. It should be celebrated, and he wants to create something especially for you. You have nothing to worry about.’

“I just remember I was super, super nervous, but he fully made me feel at ease and was like: ‘No, embrace this, enjoy this.’ That has been such a moment for me.

“Actually yesterday at my fitting, he said he wants to give me the outfit that he made for me. I was wearing this corset that was molded for my bum. I got very emotional. It was funny because I had told my son about it recently, and showed him the picture and he asked me have I got it. I am excited to show him [it] and have this with me.” 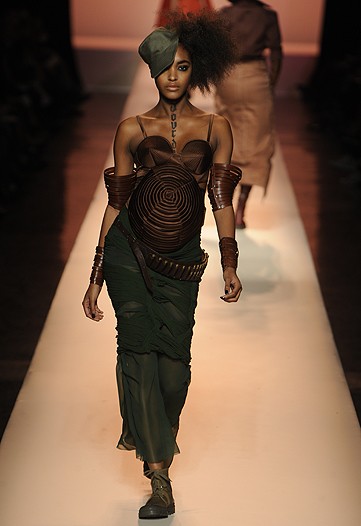 Coco Rocha: “I have continuously done his show, and he wonderfully gave me so many moments — the first, starting with my Irish dancing down the runway. And it led on and on and on.

“It’s funny how many I’ve done, yet the Irish dancing is the one that people always reminisce and talk about, probably daily to me, either on social media or on the street.

“But today’s a sad day, too. He is going to make it a fun night, so I am sure none of us are allowed to cry. When I was told — my husband actually sent me the message [with Jean Paul’s news] I just bawled in the car…driving home. We knew this was going to be a special show, but we didn’t know why.”

Laetitia Casta: “He was the first one to discover me. I was 15 years old and doing the casting for the show. It was my first show. After that, I started doing things in fashion, but it was really the beginning of everything.”

Karlie Kloss: “I feel so grateful for all the experiences I’ve been able to have on [Jean Paul Gaultier’s] runways, and I truly feel some of my fondest memories on the runway are in his shows, because they’re so much more than a runway show. It’s really an immersive experience, and as a model you get to play characters and take on these kinds of roles. He gives you the creative freedom and self-expression to dance down the runway if you like, to smile, to twirl — lets you do whatever you feel. For me it’s always such a privilege and such a pleasure. So this one is going to be one to remember.

“I remember when I first met him. I had just one tear sheet in my book; I was brand new. I had one editorial from Steven Meisel, Italian Vogue. [I walked] in and he immediately knew that editorial. He knew me, he was very excited. He heard I was a dancer and immediately embraced me and gave me this opportunity to really shine on his runway, and I was so young.

“His kindness really is unparalleled.” 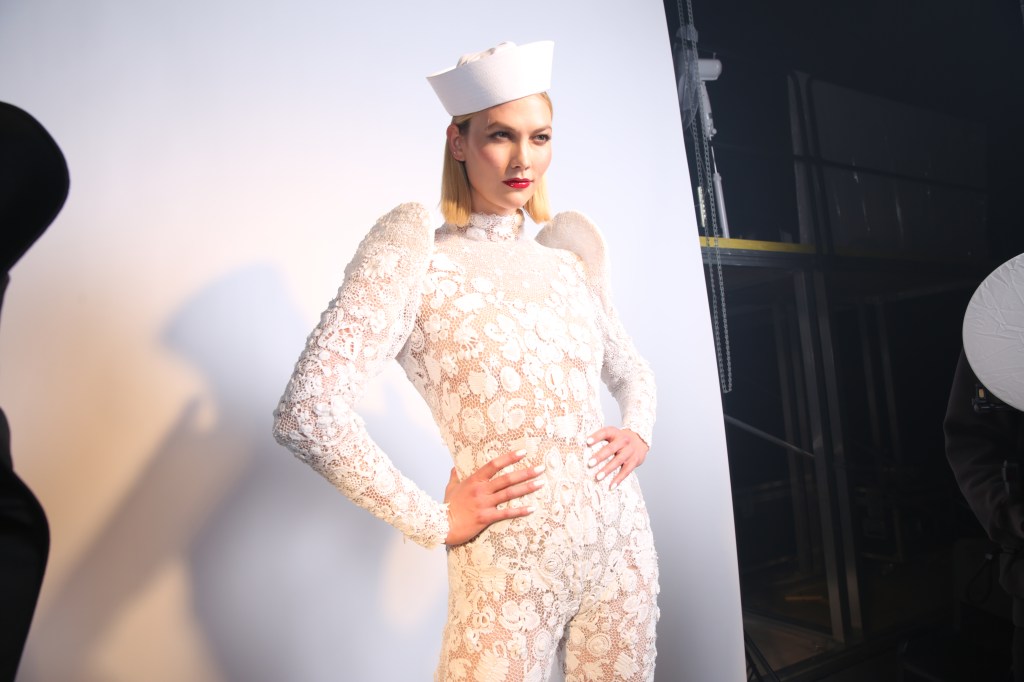 Jade Parfitt: The first time Jean Paul Gaultier asked Jade Parfitt to be the bride in a couture show stood out in her mind. “The couture bride is a really big deal. When you’re a model in the show, you’re always a bit covetous of who’s the bride. He asked me if I’d be the bride and, of course, I said yes. Then he said: ‘But you will have a really long train and a really high heel.’ I was like, ‘That’s fine.’ And he said: ‘You will be carrying a baby.’

“‘A real baby?’ ‘Yeah.’ ‘Of course, I can 100 percent do it.’ I remember that show really clearly, because I had a couple of other looks, and I had been introduced to the baby — a sweet little baby boy — but it was a bit of a crazy atmosphere backstage and all I could hear whenever I was there was the baby crying. I was just like ‘Oh my god, I’m going to get done here, because people are going to think I’m like really mean, taking out a baby who’s crying. What am I going to do?’ 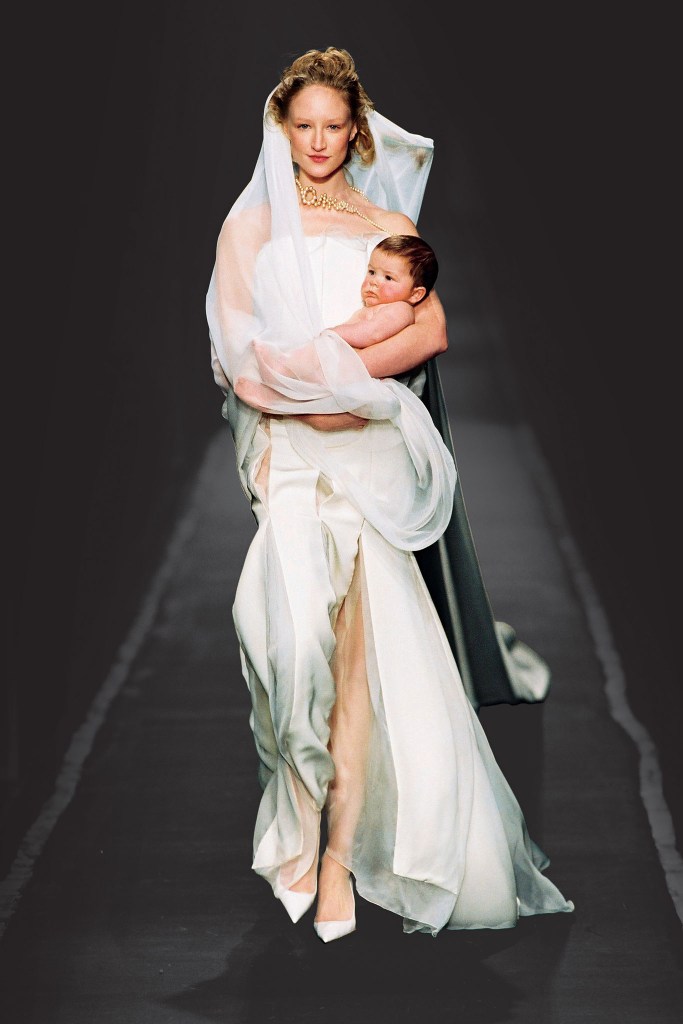 “I’m in the lineup, in the bridal outfit, the baby’s crying, and we step out on the runway, the lights change — and he’s like an angel. Stopped crying, he was looking around, the happiest, most content baby. He really, really played ball for me. And do you know what? You know who just came up to me here? His mom. She said: ‘You’re the one that carried my baby.’ I asked: ‘How old is he?’ She said: ‘He’s 19.’ So I must have met Jean Paul 22 years ago.” 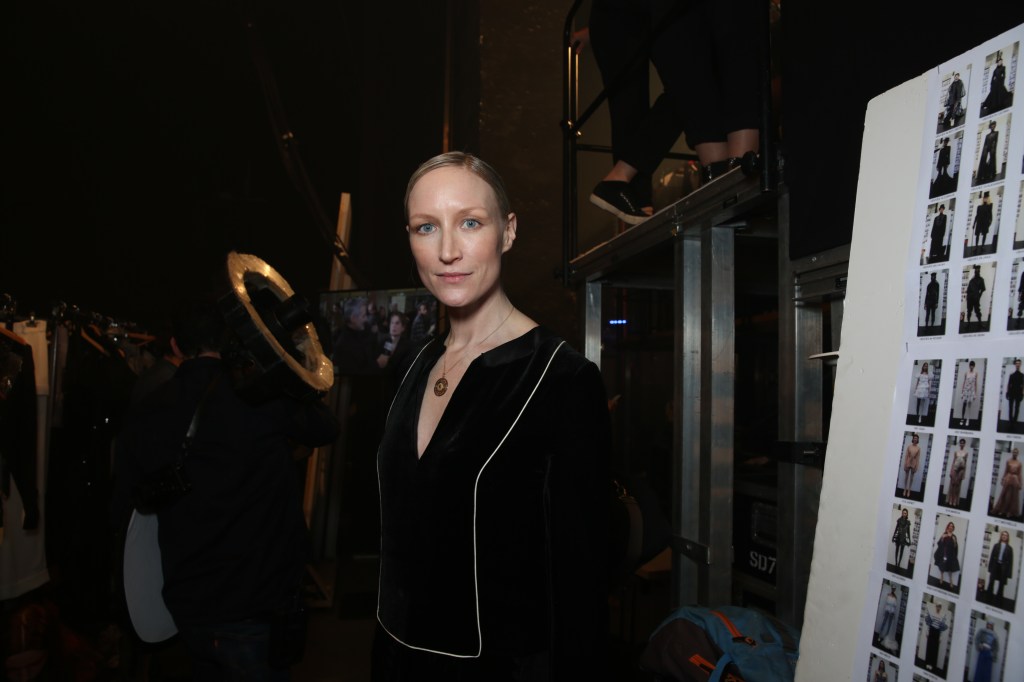 Chrystèle Saint Louis Augustin: “I use the word ‘influencer’ [for Jean Paul Gaultier] because he is someone who really puts forward what today is very à la mode — though perhaps not at the time [of his start] — all types of humans, cultures, who truly encouraged a vision of the other. He gave a place to each person… always highlighting diversity. Jean Paul pushed for an openness of mind. He was an influencer of that since the start.”

Odile Gilbert: “We always prep a lot of special pieces — things that don’t exist [otherwise]. He’s always [said]: ‘I want something like this, like that’ and I’m like: ‘It doesn’t exist. How are we going to do it?’

“I only have good memories. I’ve worked with Jean Paul for 24 years. The thing with him that I always enjoy is that he has a very fresh mind. He is like a kid — really like a kid.”

Erin Parsons: “What I love about him is he’s always fun. He has fun with it. He is 67 years old and he’s still like a little boy. When I meet him, he is so full of joy and so much energy. He just really lights up when it comes to anything creative.”