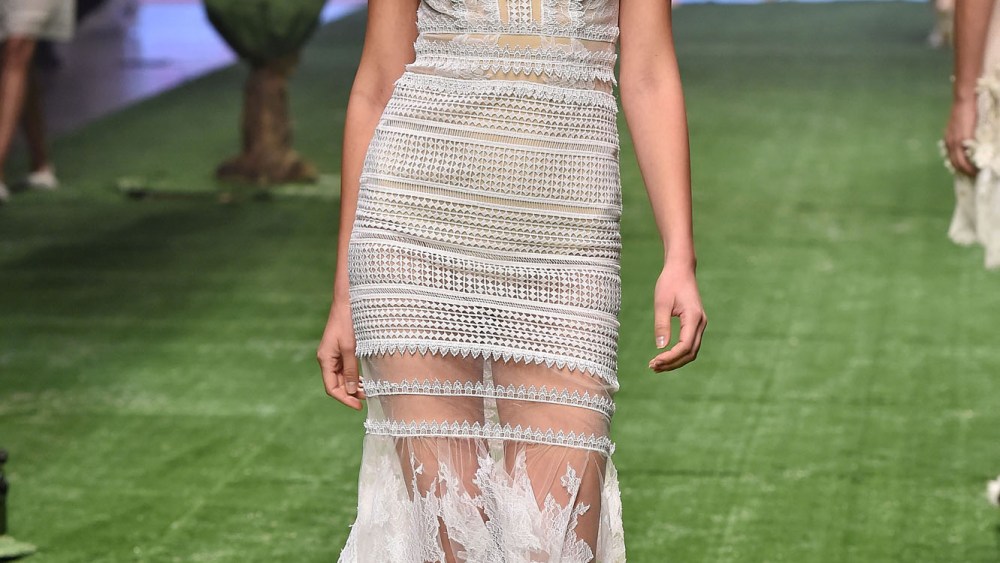 DUBAI — Fashion Forward, a showcase for emerging designers in the Middle East, closed on an optimistic note, with designers and retailers lauding the maturity of the region’s design community in the two years since its fashion week was launched. Thirty-two talents participated across 21 runway shows and nine presentations over four days.

“For the first time, we truly got the attendance of the local and regional buyers en mass, with the entire teams from big retailers like Harvey Nichols and Bloomingdale’s in the region,” said Bong Guerrero, founder and chief executive officer of the Fashion Forward event. “They are attending, monitoring and paying close attention; that is a game changer because we need to start in our home market.”

As Dubai-based retailers lament a slowdown in sales this fall, reflecting a decrease in spending from Russian and Chinese tourists, they are beginning to shift focus toward local customers.

“Consumers are looking for something different,” said Shireen El Khatib, ceo of Marquee General Trading. After spending 20 years leading Al Tayer Insignia and building its portfolio of luxury brands, El Khatib, who is widely credited with shaping and transforming the luxury retail landscape in the Middle East, has shifted the focus to local brands.

In the spring, she will launch Macramé, a concept store featuring designers exclusively from the region, from fashion to jewelry and home accessories. Sourcing the right content for the store is much less challenging than just a few years ago, she said.

“We are seeing a much larger talent pool here, especially at platforms like Fashion Forward. Each season we see stronger collections. The young emerging talents are absolutely on the right track,” she said.

Department store Galeries Lafayette in Dubai Mall hosted a month-long pop-up featuring designers that showcase at Fashion Forward. “The collaboration between Galeries Lafayette and Fashion Forward marked a step ahead in supporting local and upcoming designers in a retail environment and has proven to be successful thanks to the PR leverage obtained and interest from customers, in addition to the successful sales figures,” said Pascal Abchee, general manager of the store.

Fashion Forward also brought in international speakers and mentors to share experience and insight. “The exchange of knowledge and tools are key tools for our designers and fashion community,” said Guerrero.

Blogger Scott Schuman and MAC Cosmetics global brand president Karen Buglisi Weiler were both in attendance and spoke to designers.

Buglisi Weiler noted that collaborations and supporting young designers are integral to the brand’s philosophy. “We are always looking for new design talent to work with,” she said, citing previous collaborations with emerging international brands in other Asian markets.

This season also saw the addition of a showcase dedicated to accessories designers, a growing segment in the region, with many buyers coming specifically to seek out the 27 designers featured. Handbag designer Nathalie Trad said that Dubai has been a great launch pad, winning her accounts including Bloomingdales Dubai, DNA in Riyadh and Emporium in Bangkok. “I hope in Dubai to continue my journey in increasing my awareness of my brand and reaching a wider audience across the world,” she said.

While accessories are taking off, ready-to-wear collections reflected the multicultural nature of Dubai. Here, a roundup of a few standouts:

Long known in the market for his opulent couture and a favorite among the region’s royalty, Furne One showed his first full rtw collection for his label Amato.

The designer said it took four years to develop a line that bears his signature beading and embroidery, yet would stay at an affordable price. His collection featured textured organzas, French lace, neoprene and silk in muted shades of mint, pink, sky blue, lavender, gray and nude. He used mesh fabrics and prints to keep his price points low, but added applique flowers and hints of sparkle throughout. “Our focus was really to make this wearable and affordable,” said One.

One of Dubai’s most buzzed about young designers, Faiza Rym has redefined the rules of conservative dressing with her line, Bouguessa. She has taken the abaya, or traditional black robe worn by women across the gulf, and reinterpreted it in a modern way through tailored cuts, defined pockets, sharp shoulders and details such as bold buttons and lace-ups. Her spring-summer 2016 presentation evoked a modern safari escape via natural linens, cottons and crepes. Beyonce recently donned one of her blazer-style abayas, buoying the very young brand and adding to its crossover appeal from the modest Islamic fashion market to mainstream.

Lebanese designer Hussein Bazaza’s collection was inspired by Persian culture, architecture and arts. He created his own signature print reflecting the rich history and turmoil of Persia, juxtaposing Iranian folk tales with a beautifully set explosion of a bomb. “Obviously I took inspiration from current events,” he said with a smile. He incorporated color blocking and lace collages with the bold prints, giving the collection a military edge, softened with feminine elements. The young designer is also a finalist for Vogue Italia’s Who is On Next prize for the Middle East and Asia.

One of the hottest emerging brands in the region comes from designer Madiyah Al Sharqi, daughter of the ruler of Fujairah, a neighboring emirate to Dubai. As a member of the royal family, she grew up immersed in fashion, watching her family’s private tailors make lavish gowns for her mother and aunts. She fell in love with the process and launched her own label two years ago, creating pieces in peekaboo lace and delicate pastel tones. Her Seventies-inspired spring spanned flared trousers, elegant off-the-shoulder blouses and high, ruffled necklines. Her evening dresses, spliced together in geometric panels of silk crepe and sheer lace, had an ethereal quality and a subtle, sensual mood. Though she herself is always covered in public, Al Sharqi’s playfulness is evident in her collection.

The debut show from Jordanian Greek designer Nafsika Skourti was youthful and relaxed – spiked with strong political statement. “I’m influenced by what is going on around me,” said the designer, who lives in Amman. “We are also surrounded by unjustifiable wars and conflict. While I didn’t intend to make a collection with political undertones it was inevitable.” The collection included dresses in a colorful camouflage print while some pieces featured bilingual embroidered phrases like “Can we be victorious” and “Twice killed.”

“Arabic is not neutral right now – but that made it even more relevant,” said Skourti. “There’s also an underlying playful element to the collection – we are, after all, young women ourselves who love to go out dancing. We feel this juxtaposition formed a great starting point when designing the collection.”

The Moroccan designer evolved his signature color-blocked drapes to include embroidery, which he created in collaboration with Paris-based painter Yassine Mekhnache. The 10 hand-embroidered looks made for a mini couture collection, within his rtw, an ode to the commerciality of embellished pieces in the region. Mahrouf began his career as a costume designer and more recently moved into fashion.

The recent winners of the 2015/16 International Woolmark Prize for India, Pakistan and the Middle East in Women’s Wear, Riccardo Audisio and Yago Goicoechea, the duo behind Taller Marmo, showed their most mature collection to date, with lightweight wool and silk fabrics created in styles to adjust to the regional atmosphere. Inspired by the film “Casablanca,” they blended classic Hollywood silhouettes from the Forties with Arab landscape fashion editorials from the Sixties. With the collection predominantly black and white, the textures of the fabrics were central to the collection. These included well tailored high-waist cropped pants and summer essentials like a flared skirt, dresses and kaftans in dark, textured fabrics.