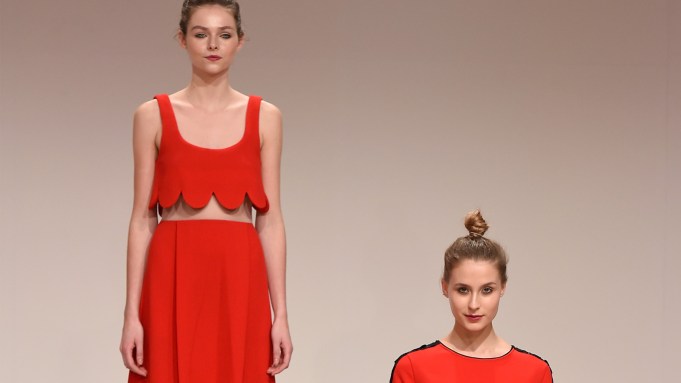 DUBAI — Fashion Forward, Dubai’s unofficial fashion week that ended Sunday, is gaining clout, having drawn a number of first-time buyers from abroad to its new location in the Dubai Design District.

Senior executives from retailers including Harvey Nichols Hong Kong, Galeries Lafayette in Paris and Moda Operandi came to see the 39 apparel and accessories designers from Dubai and its surrounding region that were showcased during the four-day event.

“We plan to pick up at least two designers that we hope to release in the next month or two,” Mary Chiam, senior vice president of merchandising and planning at Moda Operandi, told WWD. She was attending her first Fashion Forward with the e-tailer’s chief executive officer Deborah Nicodemus.

Chiam explained that for the Moda Operandi client who wants unique pieces, targeting emerging talent is a vital.

“We want to make sure we always have a global perspective,” she continued. “Coming here, we also get a lot of insight into what our customers in the region are looking at.”

Pascale Camart, director of women’s buying at Galeries Lafayette in Paris, also attended Fashion Forward for the first time, taking in the Amato show by designer Furne One, who has been working with royals in Dubai for more than 20 years.

“Shows like Amato are amazing, and we realize that some of the designers here are very established — they are not young designers,” Camart said, also mentioning emerging labels that could appeal to consumers outside of the region.

“There is a feel here of the designers that would be nice for the European market, especially places like the south of France. Salta, for example,” said the executive. “She showed that even pieces done in all gold can be chic.”

Saltanat Baimukhamedova, who creates Salta fashion, is well-known in her native Kazakhstan. But she opted to show in Dubai for the first time with the aim of expanding abroad. Buyers took notice of her collection inspired by traditional Tibetanwear rendered in futuristic gold-foil fabric. The bright pieces in loose cuts were combined with separates in a basic palette of black, white and nude.

Zayan the Label, by popular Dubai-based designer Zayan Ghandour, also known for her multibrand boutique Sauce, showed a whimsical collection giving a nod to the Alaskan landscape. It came after a two-year hiatus during which she focused on bringing the brand to trade shows abroad.

Her tenth collection was shown off the runway, a format added by Fashion Forward this season.

“We always felt the brand worked better as a presentation, which allows people to get up close and personal with the collection,” said Ghandour, who lauded the event’s move to the Dubai Design District, a newly formed hub for creative industries.

Bouguessa, by designer Faiza Bouguessa, is a line that was quietly launched two years ago with elegantly tailored abayas, which are the long robes worn in public by local Gulf women. Since then her designs have attracted a more global and high-profile audience, including Beyoncé, who has sported a Bouguessa abaya as a long duster.

The label’s long shirtdresses are gaining a cult following, too. This season Bouguessa experimented with fabrics and lengths, adding satin and piping. She also included details such as drawstring waists.

Taller Marmo, by design duo Yago Goicoechea and Riccardo Audisio, presented its resort 2017 collection whose key fabric was a viscose jacquard created from an Ottoman miniature painting by Nakkas Osman.

“We developed the print for months in Italy,” said Goicoechea.

Among the designers to be showcased in Dubai was 25-year-old Hussein Bazaza, from Lebanon. For dresses he used lace collage mixed with embroideries, embellishments and story-telling prints. The designer also patched together geometric cuts and shapes of different materials to create a form of colorblocking that has become wildly popular across the Gulf.

Bazaza, who recently won the Style.com/Arabia Dubai Design and Fashion Council Prize, has a capsule collection launching on Farfetch later this month. He said it remains difficult for him to keep up with buyers’ orders until he can ramp up domestic production.

Kage, by designer Basma Abu Ghazaleh, showed a fall collection of wearable girl-next-door-style pieces featuring a playful cat print juxtaposed with plaid separates. The pieces retail from $150 to $480, price points critical to maintain in a market flooded with international brands, according to the designer.

“It’s a challenge keeping our production quality high and our prices low, but I am very aware that this is really important,” explained Abu Ghazaleh, who is exploring manufacturing certain key pieces in Italy. For now, however, her fashion is made solely in the United Arab Emirates.

“For the first season I am here to look and discover,” said Camart, of Galeries Lafayette, whose Dubai store is currently holding a pop-up exhibition of regional designers. “But I will have to come again next season and see how they develop their collections.”