Welcome to the new, vastly improved world of resort. 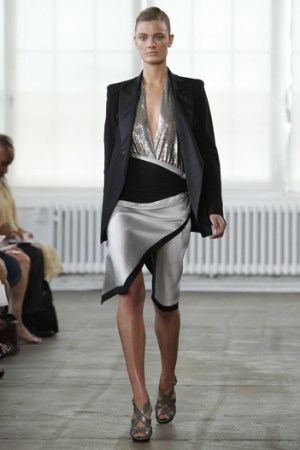 Welcome to the new, vastly improved world of resort. Not to jinx anything, but so far the CFDA’s attempt to condense the American collections, at least, is going well. Except for the fact that various constituencies can’t agree on what to call it, opting for either resort 2010 or 2011, the former clearly the more accurate handle since the clothes start to ship in October. That all should get on the same page is not a minor point, given the necessity of proper tagging for archival purposes.

Most American and some European designers are showing in New York within or around the June 7 through June 18 time frame suggested by the CFDA. And if last Friday’s full slate elicited the occasional requiem for the loss of summer hours by a few lucky types who typically partake of the perk, it also brought on a mini burst of show-going adrenaline that past resort seasons — you know, the ones that started in May and plodded toward August — sorely lacked. By next year, it’s reasonable to assume that New York resort will play like a complete, tightly scheduled collection season.

All involved should work to make this happen, in Europe as well as New York. Resort boasts the oft-cited distinction of being the most important season of the year, with the longest time on the selling floor — including the merch at full price for the holidays. Yet the season’s rapid ascent has far outpaced the way it’s been handled, at least from a press standpoint. Only over the past couple of years have magazines even started shooting it seriously, itself an accomplishment, given the difficulty of getting a creative thematic handle on — not to mention workable shoot dates for — a quite diverse season dribbled across eight weeks. At this publication, securing space for daily front page space (oh, those pesky Beauty Fridays and don’t even mention men’s wear) has sometimes felt about as appreciated as suggesting a spread for snapshots of a staff karaoke night.

Now, finally, everyone seems to be on board. It’s not surprising, then, to find many designers rethinking their manner of showing. Some have opted for formal runways and others, informal presentations, but with the kind of carefully edited run-of-show that transforms a once mundane retail delivery into a true collection.

None of which is to say that resort should turn into a third megaseason. No one wants that — at least not beyond those exciting, globe-trotting Chanel and Dior extravaganzas. From a practical standpoint, many smaller houses simply can’t afford a third major production. Keeping resort efforts to a smaller scale prevents such houses from feeling squeezed out.

Furthermore, what’s wonderful about the season’s developing approach is its intimacy. Though not as charming as back in Isaac Mizrahi’s “Spa” days, when his mom and then-business partner Sarah Haddad-Cheney served homemade Syrian rosewater pastries and iced tea, these shows feel friendly, presented to a tight industry audience sans bells, whistles, door frenzy and excessive editorial trickery, yet with enough polish to carry the fashion moment. On Friday alone, the approach worked as well for Donna Karan as for Jason Wu, both of whom offered beautiful collections. Undistracted by the celebrity across the runway, the designers’ audiences kept eyes squarely where they should be, on the clothes, whether Donna’s elegant chain mail or Jason’s gamine chic.

Let’s hope that this time next year, more designers will show in a similar vein. But it all hinges on maintaining a certain temperance. So, should the cute cast of “Glee” meander in, tell them they’re early. Their booking is for September.