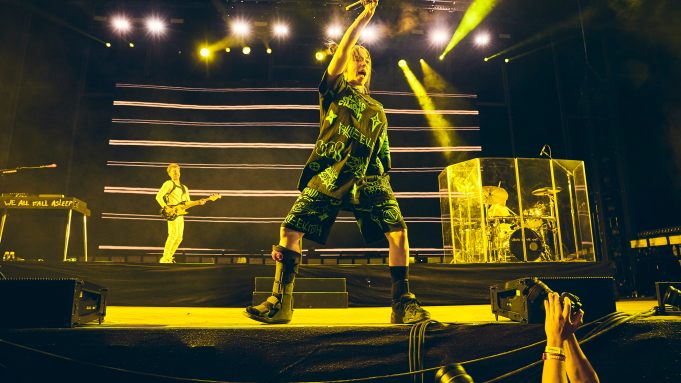 Fashion’s future is gender-neutral: Fashion’s distribution channels, including digital, are not there yet.

That hasn’t stopped a growing number of brands from wading into gender-fluid, unisex or polysexual fashions, with Louis Vuitton, Balenciaga, Marc Jacobs, Karl Lagerfeld and Stella McCartney among brands parading such styles for spring 2021, or launching capsule collections in recent months.

Other runway brands at least knee-deep in the space include Gucci, Maison Margiela, Kenneth Ize, Chromat and Telfar, to name but a few.

“Brands want to align themselves with choice and openness to self-expression, so have made an active shift to let their customers and any person decide what they buy and want to wear,” said Dominic-Afsheen Akhavan-Moossavi, who bills himself as one of the only educators in the U.K. to run a gender-neutral fashion course.

“I do think it is becoming mainstream, or at least it’s being more widely discussed and shifting into the mainstream consciousness,” he said, calling gender-free styles “this generation’s version of the punk scene, or the New Romantic scene, or the grunge scene in previous decades.”

London designer Charles Jeffrey, who bills his Loverboy collection as nongendered, said traditional notions about clothing made for certain body types is eroding. “Nowadays there is so much more focus on seeing yourself ‘in’ something rather than seeing how it fits,” he said.

That said, “we do kind of categorize certain garments as being traditionally built for a particular body shape. We try not to say ‘men’s’ or ‘women’s wear’ too much, although we do align ourselves with the binary system,” Jeffrey said. “I think, for me, stores are lacking in the representation of people of different genders, both in-store and in online photography.…I think it’s important for retailers to have more trans bodies on their sites.”

Ize, who trained as a men’s wear designer, said when he launched his brand, “women wanted to buy 70 percent of the collection for themselves.” Today, who buys his genderless collection and where it’s showcased varies by country and by store.

“In Japan, most of our bags with the long fringe sell really well to men. In Europe, it’s women wanting to have the men’s wear,” he said, while noting that stores like Browns and Matchesfashion.com showcase his designs in men’s and women’s departments.

Jack Cassidy, the head of men’s wear at Selfridges, pinpointed three “areas of product” well suited to “engage a customer not thinking about fashion from a gender perspective.

“Unisex is led by streetwear, and now the smaller grassroots labels connected to subcultures,” he said.

Second would be “avant-garde brands, most significantly Japanese labels like Comme [des Garçons], Yohji [Yamamoto], Issey Miyake have a shared aesthetic for everyone,” while third would be “boundary-pushing brands subverting traditional gender codes include Alessandro Michele’s Gucci and Wales Bonner.”

He noted that Selfridges sees “a high concentration of women shopping men’s designer wear and do not tend to see sizing cons. A confident customer will navigate multiple sizing indicators,” he said. “Our ‘designer street room’ is an example of the direction of our approach to physical retail — a social space — which is community- rather than gender-led for like-minded people to come together and spend time in a unique environment for shopping and experience.”

In his view, 2015 was a pivotal year when the industry pivoted away from gender-specific. “Designers began to show men’s and women’s collections together, and streetwear exploded as a progressive movement, now core to our fashion business,” Cassidy said, recalling that Selfridges unveiled its Agender pop-up concept that year.

Other department stores have yet to invest substantially in gender-fluid fashions. Lane Crawford in Hong Kong and Le Bon Marché in Paris declined an interview request for this reason.

“We are thrilled with the positive and engaged response from our customers, both established and those new to the world of Marc Jacobs, particularly on our e-commerce platform,” he said, noting that Heaven is also being sold on Ssense, represented under its men’s and women’s tabs.

He said Heaven was meant to “reach a new audience that has put less importance on traditional gender roles and looks more toward integrity and authenticity.

“Marc has long been a believer that clothing itself is not inherently gendered, rather society norms have previously determined certain garments are for certain people,” he explained. “Marc and I see a great deal of hope in today’s youth, that these limiting ‘rules’ are increasingly no longer relevant, with a renewed courage to be oneself.”

The executive also cited strong demand for larger sizes of Heaven, as the company has seen recently on collaborations with Peanut and Cactus Plant Flea Market. “Its inclusive spirit and ideology will remain at its core going forward,” he added.

During its spring 2021 showroom presentation, Karl Lagerfeld unveiled its unisex capsule. Pier Paolo Righi, ceo of Karl Lagerfeld, said the late founder’s personal style, hinged on white shirts and dark tailoring, lends itself to both genders and is in tune with the current zeitgeist.

He said the brand’s unisex styles would be represented in both departments online, depicting men and women wearing the pieces. In physical Lagerfeld stores, the blazers, raincoats and fleece items will be displayed in men’s and women’s areas, and with some additional exposure in some stores as a genderless space.

Righi said Gen Z is the “core target” for the unisex items, but noted that many women had already been browsing the men’s items.

In April, Karl Lagerfeld will introduced a capsule collection in collaboration with Ize, and it, too, will be “1,001 percent genderless,” the designer said, touting cuts and fabrications that will be flattering for a wide variety of sizes and body shapes.

Ize cited his youth and his queer identity among reasons his collection “has to be a genderless” story. He recalled growing up in Nigeria, men were not allowed to wear pink, for example, whereas he views clothing as a tool for experimentation and self-expression. “I want to be able to wear everything,” he enthused.

Zowie Broach, head of fashion at the Royal College of Art in London, said gender is “way more nuanced” than the way it is presented in the mainstream and how today’s students “describe, build and explore their gender is not genderless nor unisex — it is their very sense of self.”

The school dubbed its program simply “fashion” and from that word “the students choose and outline their further areas or description of their work, themselves. The students discuss many ways they would prefer their practice to be described and these words emerge each year.”

For example, a master’s program graduate named Sissel Kärneskog called their collection “human wear” and and stressed that “the thing to be aware of is that this moment of inclusion doesn’t become a trend, because it is the solution.”

Amy Sperber, assistant professor of fashion design at the Fashion Institute of Technology in New York, said about a third of its students would describe their designs as fluid.

“The students are approaching their work this way because it is fundamentally part of how they see the world,” Sperber said. “As a design institution, we are evolving our curriculum and language to meet our students’ expectations. It starts with simple changes — it is ‘fashion design,’ no matter what gender. Right now, the pathways are labeled gender-specific, but as we change, so do the designated titles.”

“Our students are selling collections via Instagram; there are no floors, no ceilings either,” she added.

Sperber noted that advanced design technology makes it easier to develop any garment for any physical form.

“Three-D tools make the discovery and iteration process more fluid since you can swap out various avatars and see the adoption of the pattern geometry instantly,” she said.

“There has been a significant move away from traditional women’s wear toward men’s wear/unisex, sportswear and less gendered fashion,” agreed Andrew Groves, a professor of fashion design at the University of Westminster in London. “This has been driven in part by students not wishing to impose ideas on who or how their garments are worn, presenting them as ‘proposals’, consciously moving away from the dated notion of the designer as an autocrat.”

Yet the creative bubble of fashion school and the working world is something else, according to Groves.

While students at Westminster are free to create gendered or nongendered fashions, students’ perceptions “radically change once they go on internships. It is startling how many say they want to switch to men’s wear when they realize how much more collegial and supportive the men’s wear industry is in comparison to women’s wear,” he said.

According to Akhavan-Moossavi, fashion students today are looking at idols who reject standard or stereotypical “body types, gender roles, sexuality and to go with this, they want to find brands that will cater for a more fluid fashion expression.”

“I’ve seen the younger generations mimicking people like Billie Eilish and Yungblud – not just for the way they dress but also the way they reject the idea of sexualizing themselves and clothes, fighting against having to show the body,” he said, noting that brands on their radar include Collusion, plus designers Matty Bovan and Patrick Church.

Decoding Genderless Fashion, the Future of the Industry