Simon Doonan delivered the keynote speech for the awards during a luncheon at Cipriani 42nd Street. 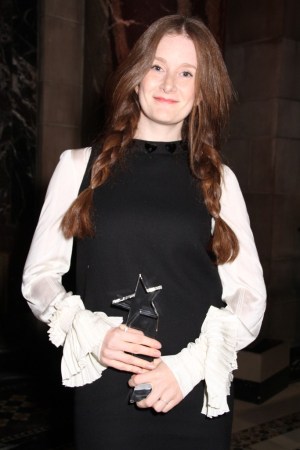 NEW YORK — When it comes to career advice, trust Simon Doonan to deliver it with abundant humor.

This story first appeared in the January 29, 2014 issue of WWD. Subscribe Today.

“Think of me as a gay male version of Maggie Smith’s character in ‘Downton Abbey,’” Doonan said in his keynote speech at Fashion Group International’s Rising Star Awards Tuesday. Like the Dowager Countess of Grantham, his quips came with the right timing to add a necessary lightness to the lengthy luncheon at Cipriani 42nd Street.

“When you become established, do not make the mistake, as many designers do, of giving away free frocks to overpaid movie actors,” he told the crowd, which included Graziano de Boni, Hal Rubenstein, Ruffian’s Brian Wolk and Claude Morais, Steven Stolman, Amy Astley and Mickey Ateyeh. “Celebrities are very high-maintenance and should be forced to pay 10 percent more than regular people. That’s the celebrity surcharge.”

He also said, “Make sure your star is on a dimmer, so that you can adjust it and give the rest of us an occasional break from your blinding, twinkling fabulosity.”

And that was just a sampling. Whether or not the winners in the nine categories took Doonan’s wisdom to heart remains to be seen, but at least they got to have a good chuckle.

In women’s ready-to-wear, this year’s winner was Giovanna Randall of Honor; in men’s wear, it was a tie between Ian Velardi and Kerby Jean-Raymond of Pyer Moss. The latter’s heartfelt acceptance speech touched many of the guests. “I want to thank my girlfriend for letting me max out all our credit cards,” Jean-Raymond said. “Chase, American Express, Capital One, every other credit union.”

He promised to get her a ring when all are paid off.

The accessories award was a tie between Edmundo Castillo, who has been designing shoes for more than a decade, and Warby Parker’s Neil Blumenthal and David Gilboa. The fine jewelry award went to Margery Hirschey and retail to Rachel Shechtman of Story. Michael Preysman of Everlane took home the Karen Harvey Business Innovator Award.