Tonight, the Fashion Group International will celebrate luminaries from the design community. 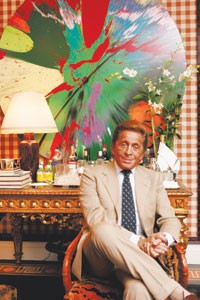 On Tuesday morning, Valentino traveled downtown to the Bowery to make a cameo appearance in a movie. But, Valentino being Valentino, it was naturally alongside one of Hollywood’s greatest actresses, Meryl Streep, and the movie was “The Devil Wears Prada.”

In the scene, the designer, who hasn’t read the book, received Streep backstage after his show. In more than 10 takes, he uttered, “Miranda, Miranda” (after the lead role Miranda Priestly), then asked the fictional magazine editor what she thought of the show.

“I was so honored to be on the screen with a lady who was nominated for the Oscar 13 times,” Valentino said, sitting in his Manhattan apartment Tuesday afternoon. “I met Ms. Streep years ago in Los Angeles. She is a wonderful lady — so intelligent and cultivated. She is a great, great, great artist, a sensational actress.”

Tonight, Streep will return the honor when she presents Valentino with the Superstar award at the Fashion Group International’s Night of Stars.

“I am very happy,” Valentino, 73, said of the award. “I have been in this industry for many decades. I love America. It’s always fantastic when people still appreciate your work. It gives me the kick to go on and do my best.”

Unlike many of his peers, he’s managed to achieve quite a rare feat in more than four decades: He consistently pleases long-term clients while constantly attracting new ones. “I try always to do the best I can and to make women look the best as possible,” Valentino said.

If there was one gripe he has developed over the years, it’s how writers have branded him a designer just for the Ladies who Lunch and the red-carpet set. “It’s never just for people who lunch at La Grenouille,” he said.

Valentino, who comes to New York about twice a year, keeps an apartment facing Central Park, which, while opulent, has a comfortable, home-like feel with contemporary and classic art and antiques, and a manservant with model looks on hand.

Valentino prefers to keep a low profile here, dining privately with friends and going to the theater. For instance, this Halloween, he plans to stay in and eat “a lot of pumpkin.”

“I love being with my friends, and having the most normal life in the world,” he said. “I love food, I love to speak about everything. I am not a social butterfly.”

His business certainly keeps him on his toes. Valentino just opened boutiques in Berlin and Munich. Next spring, he will open a store in St. Petersburg, one of his favorite cities. “I love the ballet, so I always go to the Mariinsky Theatre,” he said. “I would like to design costumes for it.”

Valentino downplayed recent reports of his imminent retirement. “I am happy; I go on and have to go on,” he said. “I love this work so much, I couldn’t abandon it.”
— Marc Karimzadeh

The floor-length dress of her own design that Alberta Ferretti plans to wear tonight to pick up her star honoree award is the same style that Angelina Jolie wore to the Worldwide Orphans Foundation dinner Monday night. The designer admitted her physique can’t compete with that of the lithesome actress, but as someone who has been self-employed for 25 years plus — no small feat for a designer — Ferretti has pulled off her share of incarnations.

Next month she will open a freestanding store in the United Arab Emirates, and another is being planned for Moscow. Earlier this week, Steven Klein shot an “extremely feminine and sensual” Ferretti campaign, she said during an interview Tuesday. Eyewear and a perfume are in the works, but like much of what Ferretti does, she is taking her time, instead of rushing into another category for the sake of the brand’s exposure. This fall she introduced Prêt à Couture, a capsule collection aimed at women who want “innovative designs that have not been photographed in the past, which is especially important today,” Ferretti said.

Clearly, she is comfortable breaking from convention. The designer skipped the sometimes dreary and thankless route of working for a more established house before setting out on her own. In the late Seventies, she opened a boutique in her hometown of Cattolica, Italy, and began selling her signature collection there a few years later. Eventually, the success of her own collection eclipsed the boutique’s and a designer label was born. Peering back at those days, Ferretti said, “Probably the most beautiful thing was the rapport I had with my customers. Maybe that’s one of the reasons I enjoy trunk shows and continue to do them.”

While many designers toe the party line about trunk shows, Ferretti sounds as though she actually means it. Another point of difference with many competitors is how she prefers to keep a low profile. That said, tonight’s honor was not something the effervescent mother of two adult sons anticipated. “I work for the joy of designing clothing and for the love of my work without expecting to be recognized in this fashion. To me, selling clothes and having a collection that customers are contented in buying is the prize. This is a much bigger prize,” she said. “I’m very severe with myself. I always have to give more, more, more without thinking of receiving.”
— Rosemary Feitelberg

Rochas designer Olivier Theyskens has always been focused on making an emotional impact since he took the artistic reins in 2003.

Take his spring 2006 collection, which won raves from retailers and editors for its simpler, more structured styles compared with his previous efforts.

“I was looking to show something more simple,” he said. “It was not the minimalism of the Nineties, where you wanted to have no references. With references, you get emotions and a feeling.”

The collection moved from evening gowns, which he has mastered since taking over at Rochas, to day suits and romantic blouses. It was inspired by Monet’s Twenties paintings of water lilies.

“It was the beginning of an emotional abstraction,” he said of this point in Monet’s life. “All his life, he was gray…monotonous. To arrive at a moment of magic and abstraction…that inspired me. I wanted this to be an homage to it with the last dresses of printed lace.”

When he burst onto the Paris scene with his namesake collection in 1998, he made a mark with his gothic vision. Since putting his own collection on hold, he has tempered the Goth a little, but hasn’t given up on the wistful romantic.

Theyskens, 28, always loved to sew, watching his mother at the sewing machine from a young age. He attended Brussels’ fashion school La Cambre, but quit before completion to devote more time to making clothes. He showed in Paris for the first time for fall 1998, and was instantly noticed by Madonna, who decided to wear one of his coats to the Academy Awards even before any of his pieces were available in stores.

When he arrived at Rochas, the house didn’t really have an apparel vocabulary, which gave him carte blanche to develop a new language.

“When I heard the name Rochas for the first time, it was neutral,” Theyskens said. “You couldn’t give a precise image … We started from zero, building a design team and a structure. It’s also a great project in artistic terms. I could give an input and vision that was totally mine.”

Since then, he said he has been working diligently to create “a Rochas touch.” “Now, there is a delicacy. It’s very refined, but it’s also humble. It’s not glossy, sparkling. It’s femininity, taste and an edginess.

“I think a lot about women,” Theyskens added. “I am always in search of something. I am looking for balance.”

Theyskens has been taking baby steps to develop an image for the house. He wants to make sure that brand extensions make sense before taking the plunge.

Tonight’s star honoree award has a particular meaning for him. “America is our first market. It has been supportive from the beginning, and I feel understood by Americans,” he said.
— M.K.

Readying for a move to SoHo here, the Ralph Rucci showroom was strewn with bubble-wrapped furniture and cellophane-covered rolling racks this week. But in the serenity of his office, the designer reflected about his business and what lies ahead.

First up, relocating his 50-person company to an airy, gallery-like, 15,000-square-foot space at 536 Broadway, where he hopes employees will share “a sense of growth, potential and possibility.” Four three-paneled screens carrying images of falcons will greet visitors. They reflect how the designer, an artist at heart, is ready to take flight.

“I’ve been on this street for 25 years,” Rucci said. “I can’t wait to run, run. I need to have a fresh start. I’ll leave the Garment Center and everything it represents. Since I’ve done this with my life, I’ve learned that this classic route doesn’t have to be the route.”

Rucci’s rise has been anything but traditional; he has dealt with design, operations and even made his own prints, without the safety net of business partners. In 2002, he became the first American-born designer since Mainbocher to show couture as part of the Chambre Syndicale in Paris. Rucci continues to show his ready-to-wear collection as part of 7th on Sixth.

The first major exhibition of his work will be staged next month at Kent State University’s museum in Kent, Ohio, and Rucci will take home a Hall of Fame award from the university’s fashion school. He also is considering a fragrance, men’s wear and home.

And Rucci is sorting out the final details of a forthcoming show of his paintings in a SoHo gallery. He said he was “astounded” by the number of his paintings sold at a San Francisco exhibition in March.

“I don’t take any collection or season for granted,” he said. “I don’t presume anything. With all of my projects, I try to solve a problem or show a theme within. My work has a lot to do with thought besides function. My work in fashion has a great deal to do with research. I never stopped studying.”
— R.F.