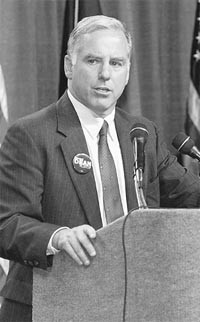 WASHINGTON — Industry executives are doing their part to fill presidential campaign coffers in an election season that’s entering high gear — and their loyalties are as divided as the Democratic field.

Although physician and former Vermont Gov. Howard Dean appears to have a lead track to the Democratic presidential nomination, political forecasters and party loyalists aren’t ready to close ranks behind him. As for President Bush’s chances of being re-upped on Election Day, Nov. 2, there’s also reluctance, even among the GOP, to give the incumbent an all-out edge.

“Anything could happen,” said Larry Sabato, a respected political forecaster and director of the University of Virginia Center for Politics. “We don’t know the state of the economy one year from today or the state of the war in Iraq. Only a fool would predict this.”

However, there’s substantial retail industry support for the president, with officials from Limited Brands and Target Corp. providing the industry’s largest per-company-executive show of financial support for Bush this election cycle, according to the latest Federal Election Commission records for the third quarter.

Contributions like these, although seemingly small, are the building blocks of campaign war chests, and the president’s is bulging, with $84.6 million through the third quarter. By Election Day, Bush expects to amass close to $200 million, and he can count on a traditionally strong GOP base among business executives to help meet that goal.

Five front-office executives at Target Corp., including chairman and ceo Robert Ulrich, have each given Bush $2,000. Other Bush backers from Target are vice chairman Gerald Storch, executive vice presidents Todd Blackwell and Michael Francis and chief financial officer Douglas A. Scovanner, each contributing $2,000.

“President Bush keeps saying if you put more money in the hands of people, they’ll keep spending it and that’s what retailers need,” said Columbia University retailing professor and Republican Alan Kane, explaining his support of $3 trillion in Bush tax cuts and rebates that he credits with keeping store sales from sinking during the economic malaise plaguing the president’s first term.

But the retail and greater fashion industry is by no means forming a solid front for the president, whose national Gallup approval ratings stand at just above 50 percent.

In addition, similar to the 2000 election, the nation appears to be evenly divided between the parties, and the electorate is becoming more polarized on key issues facing the country, according to the Pew Research Center for People & the Press. Discord is largely focused on the U.S. role in Iraq and the soft economy, including a loss of 2.7 million manufacturing jobs under Bush’s watch, 312,500 of which have been in textiles and apparel.

The fight against terrorism is also shaping up to be the centerpiece of Bush’s reelection effort and the topic of his first political ad this season, released last week. The ad denounces critics of his “policy of pre-emptive self-defense” that led to the U.S. war in Iraq and which Democratic presidential candidates have resoundingly questioned.

The ad, Senate Minority Leader Tom Daschle (D., S.D.), said Sunday on NBC’s “Meet the Press,” is a “repulsive attack” designed to quash debate by questioning the patriotism of dissenters.

Fashion designer Betsey Johnson’s business partner, Chantal Bacon, who has never contributed to a campaign before, wrote a $1,500 check to Dean in the third quarter. Bacon said she’s dismayed by Bush’s lack of international consensus on Iraq, his handling of the economy and his relaxing of environmental regulations, “to name a few” issues she has with the president. She likes Dean’s preaching of fairness and accountability in government.

“What I really like about Dean is his going back to the values you hope your government has,” said Bacon, who is also looking at retired Gen. Wesley Clark’s Democratic presidential candidacy. (Clark passed the hat at a fundraiser at Diane von Furstenberg’s New York offices last week.) “I am disappointed with the current administration and it looks like Dean is leading the opposition to that. I am worried about our international standing.”

For Bruce Raynor, president of the apparel union UNITE, the issue of picking a Democrat boils down to who can beat Bush. Unlike several other AFL-CIO member unions, which have thrown support either behind Dean or Democratic Missouri Rep. Richard Gephardt, UNITE hasn’t yet endorsed a candidate and isn’t in a rush.

“Gephardt has been a staunch ally of ours on the trade issues” as an opponent to free-trade agreements that don’t include tough labor standards, Raynor said. North Carolina Sen. John Edwards “comes from a working class textile family…and Dean on health-care issues is very strong, and he is also an aggressive campaigner and it will take an aggressive campaigner to beat Bush. George Bush, to me, is the worst president we’ve had in my lifetime.”

Gephardt has garnered financial backing among fashion industry executives. In the third quarter alone, he picked up $2,000 from Everlast Worldwide president and ceo George Horowitz, who met the candidate ringside at a boxing match. Claire’s Stores vice chairman Eileen Bonnie Schaefer and chairman Rowland Schaefer each gave Gephardt $2,000, and members of the Nakash family, who run Jordache, gave the candidate a combined $1,500.

“He’s good, give him a chance,” is how Ralph Nakash, president of Jordache Enterprises, described his interest in Gephardt.

Dean, so far, has an edge in fund-raising, with $25.4 million in his war chest through the third quarter, and has proven adept at rallying supporters, many giving as little as $10, through the Internet. Kerry comes in next with $20 million, followed by Edwards with $14 million, Gephardt with $13.7 million and Connecticut Sen. Joe Lieberman with $11.8 million.

Sabato, the political forecaster, considers Dean “a substantial favorite, but he hasn’t wrapped up the nomination.” He said a Democratic nominee might not be certain until mid-March, after several caucuses and primaries, and not just after the Jan. 19 Iowa caucus, the first test, or the second, the Jan. 27 New Hampshire primary.

“The only other candidates who have a chance, in the following order, are Dick Gephardt, John Kerry, Wesley Clark, John Edwards and Joe Lieberman,” said Sabato, discounting the candidacies of former ambassador and Sen. Carol Moseley Braun, Ohio Rep. Dennis Kucinich and the Rev. Al Sharpton. “All things considered, this is going to be a wild ride.”

As candidates work to capture voters’ hearts, fund-raising becomes a measure of a politician’s traction.

In the second quarter, Stahl also wrote a $2,000 check to Kerry’s campaign, which in the latest round of contributions also picked up $2,000 from Dress Barn Inc. executive vice president David Jaffe.

During the latest reporting period, Gap Stores Inc. chairman Donald Fisher also contributed the maximum $2,000 to Lieberman. Although Fisher historically has given to Democrats, he’s been a more generous GOP benefactor lately and this election he isn’t leaving President Bush in the cold. As was the case in the 2000 election, Fisher is helping to finance Bush’s campaign, giving $2,000. Fisher’s wife, Doris, a Gap board member, also has contributed $2,000 to Bush, in addition to $10,000 to GOP political action committees.

However, it should be noted that the Fishers have each given $4,000 to House Minority Leader Nancy Pelosi (D., Calif.) toward her unchallenged 2004 reelection bid. Pelosi, from San Francisco, is not only the Gap’s hometown member of Congress, she’s a key Democratic party leader working to unseat Bush no matter who is the Democratic nominee. Also giving to Pelosi from the retail industry this political season is Gap’s president and ceo, Paul Pressler, with $2,000.

Pelosi, 63, is considered one of the most fashionable women on Capitol Hill, as well as one of the most fiercely partisan and determined that a Democrat beat Bush. Regarding the potential of Bush being reelected, she declared at a news conference recently, “there are very few things I’m afraid of,” but that’s one.

So it doesn’t come as a surprise that Democratic insider and Internet campaign guru David Lytel put Pelosi’s picture on a poster to sell his new Web crusade, RedefeatBush.com. Pelosi’s mug is substituted for Rosie The Riveter’s, the World War II U.S. government icon used to rally national support under the motto “We Can Do It.”

Like so much in the 2004 campaign, RedefeatBush.com — the name underscores how Al Gore, in the 2000 face-off against Bush, actually garnered 543,895 more votes — is forging new territory by creating the first political action committee to be funded by sales of merchandise, which consists of political posters ($25) and T-shirts ($20).

The Web site’s proceeds will fund a PAC called the Committee to Redefeat Bush — the name is a nod to President Nixon’s Watergate scandal-plagued Committee to Reelect the President — and it will help underwrite the Democratic nominee’s campaign against Bush in key battleground states like Florida.

Like the individual Democratic candidates’ campaigns, the Bush campaign is sticking with the traditional use of merchandise as campaign advertising. It’s storefront is georgewbushstore.com.

The site is run by a long-time GOP operative, Ted Jackson from Louisville, who has run campaigns and supplied party campaign merchandise since 1984. Jackson holds the license for Bush merchandise, which is marketed according to regional tastes. For example, to attract female urban GOP politicos, there’s a discreet plain black V-neck T-shirt with a large “W” on the left sleeve and underneath “The President” in smaller letters, selling for $14.95. Rural supporters might want to buy from the “Go West” farm- and rodeo-theme line, where a white cotton long-sleeve women’s western shirt has a “W ’04” logo encircled with a lasso.

There are 90 Bush products for sale and “it’s amazing, everything sells,” said Jackson, owner of Spalding Group, declining to give sales figures. He underscores how the Internet in all its uses is playing an increasing role this campaign season by replacing armies of lost volunteers, from envelope stuffers to precinct captains.

“People don’t have time for politics anymore,” Jackson said. The Internet “has helped the average voter to participate.”