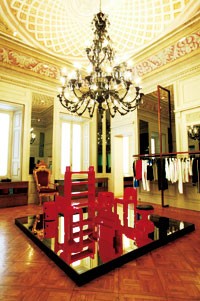 MILAN — The home is looking ever sweeter to Italian designers.

That the love affair between fashion and interior design is alive and kicking was evident from the number of fashion brands that participated in the week-long Salone Internazionale del Mobile extravaganza, Milan’s high-profile furniture and design fair that attracted 190,000 visitors from around the world.

A handful of designers lent their showrooms or stores to design-related events, while those with full-fledged home collections like Missoni, Versace, Trussardi and Borbonese showcased their new wares with attention-grabbing displays.

“The Salone del Mobile is like the Olympics, where different disciplines participate in one event. By now, there are multiple sectors that join us in celebrating Milan’s design week,” added Manlio Armellini, chief executive officer at Cosmit, the fair’s organizers.

Versace Casa, whose sales grew 10 percent in 2003 to $47.4 million, focused on padded leather headboards, gold or silver wood-frame sofas with glossy vinyl cushions, wenge-wood tables and crystal-top dining tables. Complementing the furniture was a flurry of home linens, rugs, tabletops and lampshades, all jazzed up in the company’s traditional festival of color and wild patterns. Over the last year, Versace has inaugurated five corners and one store dedicated to its home division.

Domenico Dolce and Stefano Gabbana teamed up with Kartell and picked 30 of their favorite pieces from the company’s archive museum — particularly those from the Fifties, Sixties and Seventies — and displayed them in their recently opened Dolce & Gabbana store. The space-age, minimalist lines of the furnishings gave a futuristic edge to the store’s old-world elegance of antique vases, chandeliers and frescoed ceilings.

“We have always liked Kartell for its intelligent design, its colors, its versatility,” said Gabbana. “It was exciting to choose objects from the museum, which we would like to have in our house today.”

Etro, a precursor of the home trend and a longtime staple of the Salone, introduced Jacopo2, a limited-edition series of lamps stemming from a collaboration between Jacopo Etro and the artist Jacopo Foggini. The result was 50 lamps made with Etro fabrics cast in large slabs of methacrylate, a material employed by automakers for headlights. “These are luminous sculptures and, being so tall and large, they look like surreal characters,” said Jacopo Etro, who is in charge of the company’s home collection. The lamps retail for between $2,000 and $2,300. Etro also introduced a set of dishes featuring a macropaisley pattern on an orange and fuchsia background, the same motif used in its rugs and wall-to-wall carpet.

A similar concept was seen at Missoni, which introduced a limited-edition collection of 50 vases coated in the house’s trademark zigzag and patchwork patterns, created by young artist Stephen Burkes. “This is a recycling technique,” said Rosita Missoni, holding up a multicolored vase made with leftover Missoni fabrics. “Some vases end up being translucent, others opaque,” she said. Burkes explained that he coated existing vases with resin, so that the fabrics acquire a stiff, glass-like texture. “I was attracted by Missoni’s dynamism and contemporary ethnicity,” he said.

Missoni’s home linens generate an annual volume of $19 million, while the forecast for the recently introduced collection of tabletop products, licensed to Richard Ginori, is $9.5 million in three years.

Mosaic-inspired patterns, a modern take on argyle and wave-like motifs in citrus green, purple, pink and mango orange cropped up on sheets, eiderdowns, blankets and stackable cushions. To present the collection, Beatrice Trussardi, the company’s chairwoman, created a reality show with a double bed in the windows of Trussardi’s flagship in Piazza Scala. Passersby were entertained by live performances on the bed: DJ Saturnino played the bass, a chef cooked on small gas stoves and the Italian edition of Vanity Fair shot a jewelry spread with models sprawled on the bed.

“The bed becomes a ring that blurs the line between public and private. We allowed people to interpret it the way they wanted. One of our employees went as far as sleeping on it all night,” Trussardi said.

Claude Arpels, whose investment group took control of Borbonese in 2000, expects sales for the firm’s home division to reach $8.3 million in 2006, up from today’s $3 million.

The collection is carried in 300 points of sale and creative director Alessandro Dell’Acqua is adding an edgier touch to the label by revamping Borbonese’s traditional bird’s-eye pattern in sunset orange and pearl grey. Displayed in the Borbonese store were stone-shaped beds made by licensor Rossi di Albizzate and home linens, licensed to Somma, in delicate pastels, at times adorned with stylized orchids and tree branches. “Borbonese is about lifestyle and the home collection is an integral part of the designer’s world and mood,” said Arpels, ceo at Borbonese.

Swarovski gave a mandate to 14 high-profile designers and artists to create a chandelier with the company’s crystals, which were showcased inside Fendi’s Milan showroom.

Malo, the fashion company known for its colorful knitwear, lent its whitewashed showroom to Rosanita Mercenario, a pediatrician who designs colorful objects when she puts aside her stethoscope. Mercenario’s new Quesito collection features question mark-shaped lamps, bookcases and crystal-top tables in copper, iron and crystal in a rainbow of colors. “The empathy derives from the same philosophy of natural raw materials and color,” said Stefano Ferro, Malo’s ceo.

For the ninth year running, Spazio Krizia hosted a sampling of German designer Ingo Mauer’s creations that involved lightbulbs and other forms of illumination. This year’s offering included a walk-in cube made of gold-plated paper, which Mauer describes as a potential “retreat for a poet, a meditation room or a soul-healing hospital.”

With contributions from Luisa Zargani and Amanda Kaiser