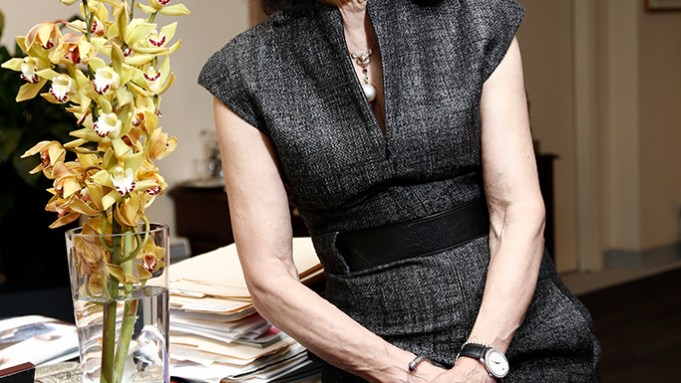 Like the industry it serves, the Fashion Institute of Technology is reinventing itself.

The college, which is looking ahead to its 75th anniversary in 2020, has crafted an ambitious five-year plan that includes a new building, an innovation center and closer ties to apparel companies.

Joyce Brown, president of FIT, said the most recent “strategic plan” builds on previous efforts to “engage the community…change the conversation” and “focus on the curriculum.”

“I knew when I came that we have tremendous resources in human capital and talent here,” said Brown, who became FIT’s sixth president in 1998. “We needed to figure out ways to have a cross-cultural fertilization in terms of ideas because things were pretty silent. Now we’re working on having a more interdisciplinary approach.”

In an interview at her office in the Marvin Feldman building, named after the school’s late president, Brown said the way the strategic planning processes have been implemented has engaged of a cross-section of the campus community, with groups finding different ways that they could “contribute to the dialogue.”

“Our latest refresh of the strategic plans led to three goals,” she said. “One was to work on the whole nature of the curriculum and new ways we could invigorate and have interdisciplinary approached. The second was to continue to work to make it a more student-centered environment.”

RELATED STORY: FIT Through the Years >>

A major step in achieving this goal of the five-year plan came last month when FIT received $74 million in funding from New York Mayor Bill de Blasio’s administration to be used toward a new state-of-the-art academic building. When completed, the structure will be FIT’s first new academic building in 40 years.

Brown said the city’s contribution matched an equal financial commitment from the State of New York that was made in 2009. She said without City Hall’s commitment, the plan for the new building would not have been able to move forward.

The new building will add 100,000 square feet to the college’s campus, which has long resided on West 27th Street between Seventh and Eighth Avenues. Brown noted that FIT’s student population stands at about 10,000, which has doubled over the past 30 years.

The new building will serve academic and student life functions. Brown said it will take another year for the building’s design logistics to be set, followed by another three years of construction. The building has been designed to include a glass facade and will sit among FIT’s current campus buildings and spilling out onto West 28th Street.

“It will allow us to have a more orderly process in providing the services the students need and a place for students to congregate,” Brown said. “We’ve been redoing spaces wherever we can. We’ve taken some lobbies and turned them into lounges for students, put up computer stations, and repurposed some lounges, but they really need their own space.”

A third step in the plan is to create an innovation center at FIT.

“FIT is a destination for a lot of businesses,” Brown said. “We have advisory councils and we listen to what they have to say to make the student more competitive once they graduate. They know the students are smart, they know they’re well educated. They take them in as interns and they hire them. We have tremendous job placement. But what I would like is for people to be able to say ‘I have an idea or I have a problem with my business or with a product I’m trying to develop’ and tap into the ideas and creativity of the people at FIT.

“So we’re in the process of planning an innovation center that would be that — creative solutions for issues related to industry — but at the same time, we’ll have other prongs of it that will enable us to partner with other universities, with government agencies, with public-private partnerships,” Brown continued. “I’d like for people to be able to think of FIT as a resource, as a place where creative things can happen. That is who we are, we just have to get the message out.”

Another part of the strategic plan is what Brown called “a new branding and image set of considerations” meant to portray the evolution of the school.

“It’s really how do we communicate that is the DNA of FIT, what we’re capable of, what is going on here, what exciting work is happening,” she said, noting it will consist of a combination of messaging, marketing and networking, among other activities.

Jay Baker, chairman of the FIT Foundation, and founder with his wife Patty of an endowment of 40 scholarships in perpetuity through a $10 million donation, said as a trustee he has been involved in obtaining the government funding for the new project.

“It’s going to transform the campus, it’s going to be phenomenal,” Baker said. “By having this incredible building it’s going to propel us even into an even further leadership role in the industry.”

Baker, who retired as president of Kohl’s Corp. in 2000, said just like the students, known as Baker Scholars, selected for the business school program, he said, “We need bright, dynamic young people in this field and this is going to afford them the very best education possible. FIT has transformed into a school that does so much more than it ever did before.”

FIT has grown with the times, Brown noted, to the point that today fashion and design are more broadly defined and so is the school’s curriculum. FIT now has a business school, a school of liberal arts, a school of art and design, and a graduate school. It has majors in marketing, interior design and advertising design, along with international trade, computer animation, toys, cosmetics and fragrances.

Baker and Brown both noted that the project coincided with the revival of the garment center and New York manufacturing.

Brown said, “Companies want to control their production and the quality control elements, so you’re seeing a resurgence in Made in USA and Made in New York, and I’d love for us to be responsive and part of that.”