Words have been muscling out images on social media as brands seek to transmit values and purpose.

Not many splashy photos with this article: It’s about words.

When Alessandro Michele flooded Gucci’s Instagram feed with a 1,200-word, manually typed manifesto about changing the show system last month, it put an exclamation mark on a steady infiltration of words into a fashion and social-media landscape long dominated by images.

“My constant search for accurate, delicate, poetic words comes from uneasiness: An uneasiness about a world, the world of fashion, too often buried in a dusty and underfed vocabulary,” Michele told WWD. “I choose my universe of words with extreme care.”

Until very recently, fashion brands seemed more obsessed with the look of words — most stampeding toward the Helvetica font to modernize their logos — than the messages they conveyed.

“Words are needed to express a purpose, and a purpose is needed to evolve or transform a consumer brand into an iconic brand,” said Floriane de Saint Pierre, who runs a namesake executive search and consulting firm in Paris. “We have entered a time where images are crucial, and can express the new, but rarely can express a sustainable purpose. And sustainable purpose has moved to the center of society.”

“Storytelling has become so big as a way to engage with consumers,” observed Vanessa Belleau of High Fifteen, a London-based consultant and executive coach, among industry figures who see text making a comeback. “Consumers are tired of the cult of sameness. You see a sea of the same imagery.”

To wit: Brands that have shifted their focus to Millennials and Gen Z — like Gucci and Dior, for example — have been waking up to the need to communicate in different ways. 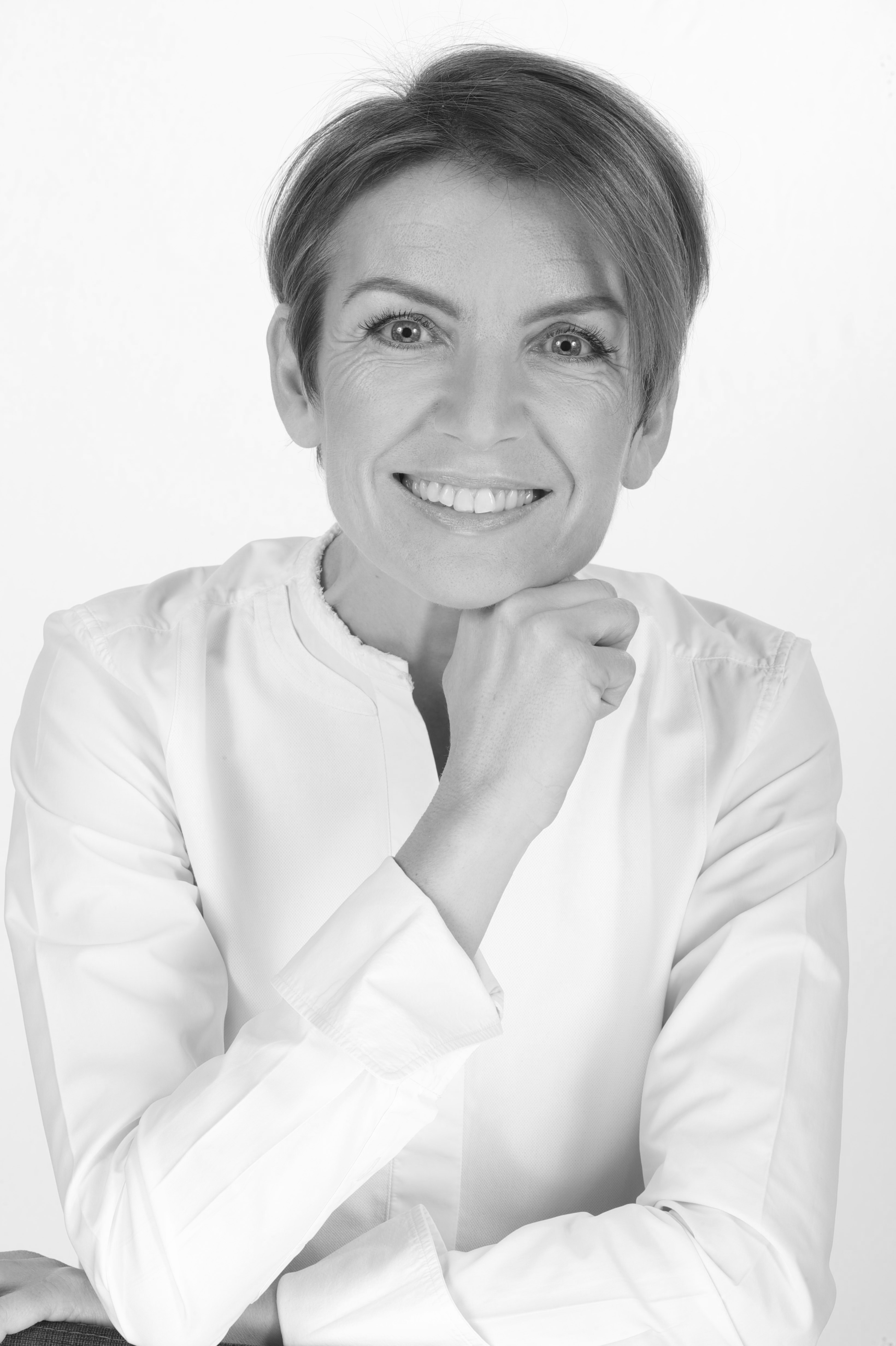 “These generations want more depth. They’re bored of the vanity and they’re tired of the traditional system,” Belleau said in an interview. “Purpose is so important. This resonates so strongly with the end consumer.”

The coronavirus pandemic accentuated the need for smart and well-chosen words: Partly because it became near impossible to create new photos and images amid lockdowns and social-distancing mandates, and partly because consumers were shellshocked, dealing with trauma and anxiety.

Brands “needed to show up with kindness and empathy, and an image doesn’t do that,” Belleau explained.

The Black Lives Matter movement, still gathering steam, is further propelling the shift away from purely visual expression, she added.

Maria Grazia Chiuri, Dior’s artistic director of women’s haute couture, ready-to-wear and accessory collections, has put words front and center of her era at the heritage house, famously including in her spring 2017 debut a T-shirt emblazoned with the slogan “We Should All Be Feminists.” 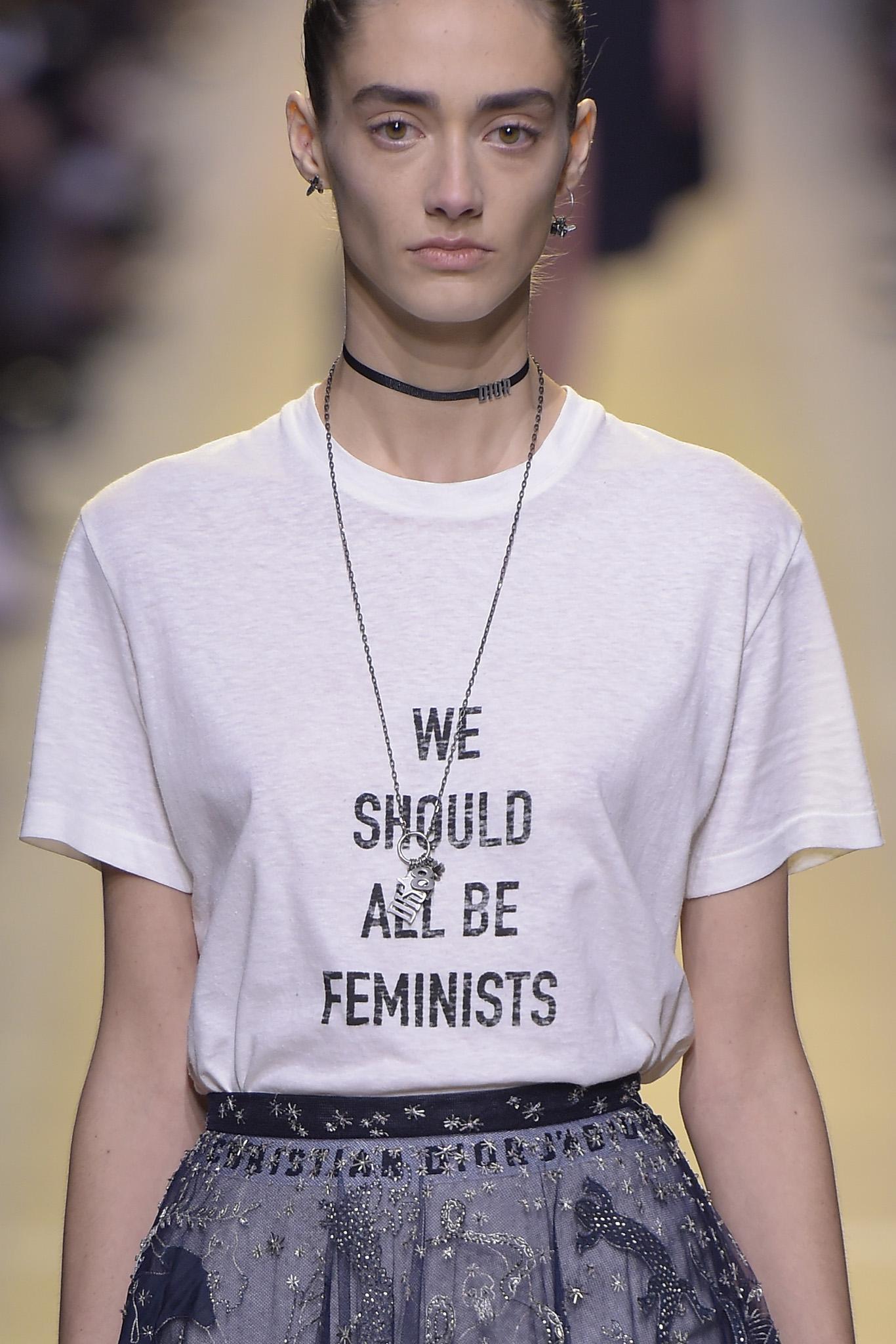 “I wanted to send a loud and clear message about which values are important to me,” she told WWD. “I had read the small publication by Chimamanda Ngozi Adichie and that phrase, ‘We should all be feminists,’ was perfect for declaring my intentions. In that first show I was able to combine, from the get-go, the force of words with the immediacy of an image.”

Chiuri called her slogans a “declaration of intent: statements that clarify my position and serve to build a community that feels that these words really speak about who they are.”

Her messaging reached a new zenith at her last runway show in March, with neon signs declaring “Consent,” “Patriarchy = Repression” and “We Are All Clitoridian Women.”

An avid reader, Chiuri said “it’s easier for me to use words as a more intimate expression of that which is at the root of each collection. The images that emerge from research follow this inner narrative.”

“It’s important for me to establish a language that can adequately convey the underlying motivation, values and sentiments of my work,” she continued. “And I think that words, imbued with both their literal and historical meaning, are still the best way to speak to people, including in the fashion world.”

The trend is so new that data is scant on how far words have infiltrated the fashion conversation online. (Launchmetrics and Brandwatch, for example, don’t track words.) Anecdotally though, observers cited a proliferation of empowerment quotes, snippets of poetry and memes on Instagram.

“Social media is definitely the driving force behind this shift,” said Donald Schneider, who operates a namesake creative studio in Berlin. “Words have become crucial for the identity and perception of a brand: the tone, choice of words, style of writing, the point of view. Even the wording of a hashtag needs to be carefully chosen.”

Schneider said designers with a strong “personal creative vision” like Marc Jacobs and Gucci’s Michele have achieved a unique tone of voice, as have brands with strong DNA, including Glossier and Nike.

“It all needs to be part of the larger creative vision for a brand,” Schneider said of language. “We work with specialized writers. Words for fashion require very special talents and skills. That’s why I usually prefer to work with writers with an editorial background.”

Belleau agreed that “being a copywriter is not valued as much as it should be. Hopefully it’s an opportunity for that line of work to rise again.

“Language really expresses values, emotions and inspirations clearly, it’s not down to your interpretations,” she added. “You have to be raw and real and words do that. Honesty is important, even if the words are crafted.”

To be sure, people are reading them carefully.

According to Anne Michaut, an associate professor of marketing at French business school HEC, consumers are not only transmitting status when they purchase luxury goods, but also projecting values, either to express themselves or foster greater acceptance.

“Clients will be increasingly looking for brands that facilitate this, and hence brands can no longer only deliver products or experiences but rather have to nourish clients all the way to projecting values that will boost their personal image, and acceptance by certain groups,” she said.

In fact, Michaut said these company values must be accepted “by society as a whole” as “commitment to engagement towards society, not only clients, has become central.”

It’s a “touchy” enterprise as there are risks of being accused of “value washing,” akin to, but possibly even more dangerous than, so-called greenwashing, when companies overstate their eco efforts. She did not rule out activists targeting luxury stores in future, as some of France’s “yellow vest” protesters did.

Gucci’s Michele lamented that fashion’s usual language, self-referential and often “tritely descriptive,” is fine for hemlines, but often unable to convey “a much deeper feeling.” 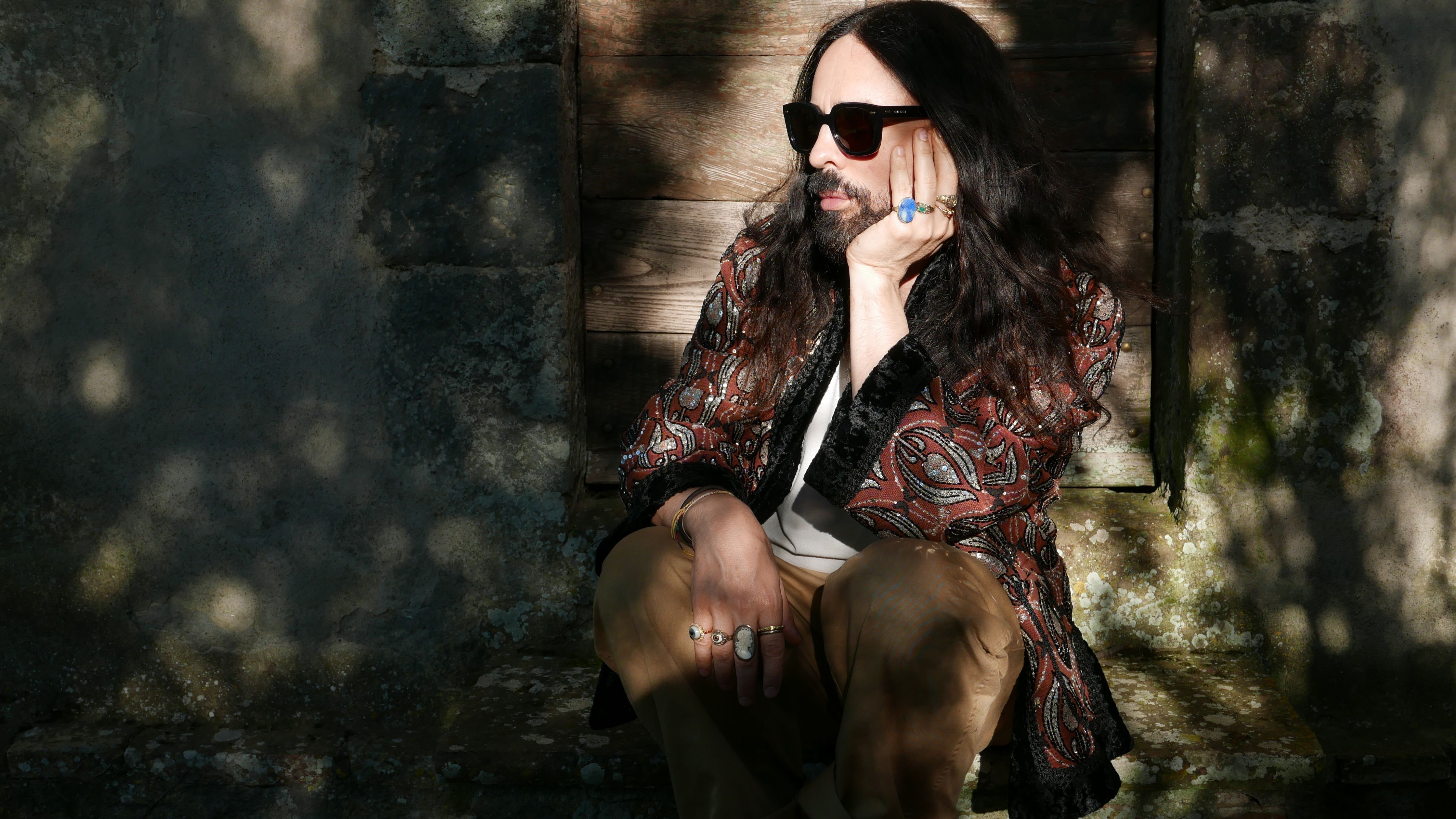 “I remember when I started my studies, the only references we had came from some fashion magazines. At best, we could dig into a past that was strictly tied down to the history of fashion anyway. Forgetting, maybe conveniently forgetting, that such history was connected to very complicated stories, imageries and processes,” he related. “I was missing something. As if I suddenly felt the need to add a sound to a silent film. I needed words that had the potential to spread, words of prefiguration. Words able to reconnect different worlds, knowledge, disciplines. Words that could make innuendoes and overtures. Words that could build bridges, able to extol the universe of contaminations that has always characterized the hallmark of my style.”

Since then, he continued, “my images and that universe of words are bound together, indissolubly.”

Michele unfurled a list of writers and thinkers that help him choose his words: “Agamben, Deleuze, Guattari, but also Bakunin, Novalis, Foucault, Arendt and Haraway. I mention them to pay off an eternal debt and to declare a theft, but also, and above all, to praise them. Because the writer is always indebted to the ones who came before him.

“I am happy I can communicate on different levels,” he continued. “Happy to work on the images and on the power of words, too. Also on those words that look apparently distant, unconventional, dissonant. Because maybe these very words can shape what otherwise would not even be conceivable.”

Chiuri said the phrases and slogans she uses come from her extensive reading.

“They are the fruit of a relationship that I cultivate with artists who have paved the way in linking feminism and modernity through the political value of words,” she said. “The great thing is that I got to meet many of the authors of these inspiring books, and that many artists have been directly involved in my projects, from collections to shows. And with them, a communion of intent was formed that is an integral part of my work.”

Gucci, Aesop and other brands have recently posted quotes from famous writers and poets — somewhat surprising in that luxury brands especially tend to rely on their own content. “Now we’re seeing it’s OK to borrow,” Belleau said. “I hope it lasts. I think it makes those brands more relatable.”

De Saint Pierre urged brands to consider collaborating with a variety of wordsmiths.

“I can only recommend to brands, from ceo’s to creative directors, to work with literary creatives, even song writers,” she said. “Would Apple be the same without ‘Think different,’ a slogan used since 1997, and still used today?” she asked. “Would Nike be Nike without three words, ‘Just do it’?”

The ‘Gamification’ of Fashion Is Accelerating