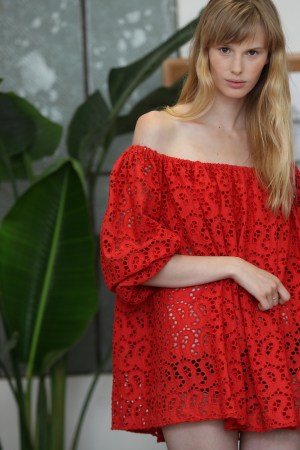 In her former career — managing international sales for Oscar de la Renta and, more recently, Carolina Herrera — Marina Cortbawi frequently found herself traveling throughout Europe, Asia and the Middle East. “We did events all over the world, and I met so many women and observed how they dress,” said Cortbawi during a conversation in her sunny Brooklyn studio, where she’s been designing her new label, Merlette, for just under a year. “Seeing women at the mall in Kuwait, or crossing the road in Kazakhstan wearing big party skirts during the day…meeting these women that inspired me and having conversations about what kind of fabrics they like to wear, what kind of sleeves they love — their femininity and love of fashion — that’s really what started to come to me,” she continued. Cortbawi channeled those influences into her debut collection, which launches today exclusively on Moda Operandi.

A native of Sydney, Cortbawi is quite the international woman herself. Though currently based in New York, she has lived and worked first in Paris, then London. “I studied journalism, but I never really did anything with it — I somehow landed in [Parisian] showrooms,” she said. “I ended up being the person who helped smaller designers sell and manage their businesses. I always fell into the business side of things.” Six years ago, her career brought her to New York. It was at de la Renta and Herrera that “I learned how important femininity and timeless elegance are in terms of aesthetics,” Cortbawi said. “And also — a strong work ethic.”

Aiming to launch a collection for fabulous, modern women — the kind she’d meet during her travels — Cortbawi became a transatlantic traveler, enrolling in design classes at Central Saint Martins and the London College of Fashion to complement her business brain. “I was thinking, ‘How do I dress people whose lives aren’t in one place?’ Merlette is a getaway wardrobe, but this woman could also just be very curious about travel….That was the inspiration.” (In French heraldry, the word merlette is an imaginary, ducklike bird without feet, symbolizing restlessness and constant flight.) Of equal importance to Cortbawi was working with natural fabrics — her debut collection is made entirely from cotton. “There’s something about the purity and the feeling on the skin of good, quality cotton,” she said. “I believe you can do beautiful eveningwear in cotton.”

Designed by Cortbawi in New York with a small team of tailors and patternmakers — and with intricate hand embroideries done in India — Merlette’s first lineup offers airy dresses, skirts and blouses that don’t cling to the body. Rendered in white, black and red cotton sourced from Italy and Japan, the collection’s romantic, bohemian spirit comes across via feminine details: think billowing puff sleeves and off-the-shoulder silhouettes. A simple button-down blouse is elevated with delicate wrap-ties at the cuffs. “It’s about the ease of wearing something natural and light and throwing it into a bag,” Cortbawi said. “The clothes are hybrid, for day and night, and transeasonal. You can wear them with sneakers in the city, heels at night or to the beach. People like to mix and match their clothes now — gone are the days when you go to one brand for a whole look.”

Cortbawi plans to launch two new Merlette collections a year during the resort and pre-fall seasons, though she prefers to refer to them simply as Collection 1, Collection 2 and so on. Earlier this summer, she sent her look book to Moda Operandi, which immediately picked up the collection as a buy-now-wear-now capsule. “It’s available for pre-order, but it will ship very quickly,” Cortbawi said. “Girls will have it to wear to the Hamptons for the rest of the summer.” The collection, which ranges from $150 to $500, will eventually be available on the brand’s e-commerce site, Merlettenyc.com, as well.