Revisit the stories that made made fashion news over this past year. 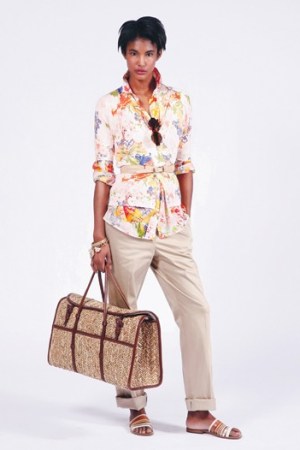 Jan. 7: Isaac Mizrahi unveils his first collection for Liz Claiborne. He shows his fall line in April at the New York Stock Exchange, a first for the trading floor.

Jan. 8: Hart Schaffner Marx launches a line based on suits worn by President-elect Obama. Days after the inauguration,  the company files for Chapter 11.

Jan. 13: Brushing aside rumors that he’s parting ways with Nina Ricci, Olivier Theyskens shows elaborate looks for pre-fall. While he insists he is “totally committed to Nina Ricci” and Puig president Mario Grauso expresses satisfaction with his work, Theyskens is gone following his fall 2009 show in March, to be replaced by Peter Copping.

Jan. 15: Thom Browne makes a pitch for true uniformity (even with cropped, ankle-baring trousers). His installation at Pitti Uomo features 40 models all dressed in identical ensembles, typing in unison.

Jan. 16: Though he’s only 38, Hussein Chalayan is preparing for a retrospective at London’s Design Museum. Avant-garde hits such as his table dress and LED light-enabled designs will be shown, along with his 1993 student collection for Central Saint Martins, in which he buried all the clothes in his backyard before exhibiting them.

Jan. 21: Jason Wu and Isabel Toledo are catapulted into the history books as First Fashion Plate Michelle Obama chooses their designs for Inauguration Day and the inaugural ball, respectively. Toledo provides a celadon coat and dress, while Wu’s white gown prompts a presidential exclamation of “How good looking is my wife?”

Jan. 23: Understatement of the Year alert: “He’s really into sneakers,” says Marc Jacobs of Kanye West. The rapper and fashion enthusiast says he owns about 400 pairs, and he is designing a monochromatic sneaker line for Louis Vuitton inspired by the sci-fi movie “Dune.”

Jan. 29: Those nostalgic for Betsey Johnson back in her Paraphernalia and Alley Cat days cheer the news that she’s teaming with Opening Ceremony to re-release 35 of her greatest hits from that era, due out in the fall.

Jan. 30: “Even I know you’re famous for stripes,” French President Nicolas Sarkozy says in honoring Sonia Rykiel at the Elysées Palace. Jean-Louis Scherrer also is decorated at the event.

Feb. 4: Mayor Bloomberg announces New York Fashion Week will be moving to Damrosch Park in Lincoln Center for the September 2010 shows. Ariel Foxman, InStyle managing editor, says, “You have to love that fashion week is moving to the site that’s already home to the Big Apple Circus.”

Feb. 5: Mary-Kate and Ashley Olsen launch men’s wear for their label, The Row.

Feb. 14: Newcomer Prabal Gurung, who’s worked at Bill Blass, shows his debut collection in New York. He calls his line, “clothes for the thinking man’s sex symbol. Dare I say, for the anti-Paris Hilton.” His dresses later land on Oprah and Demi Moore.

Feb. 14: Yigal Azrouël doesn’t believe the old saw “there’s no such thing as bad publicity.” So he’s peeved Ashley Dupre, Client No. 9’s favorite call girl, ended up in his front row. Azrouël dismisses Kelly Cutrone, who was handling front of house for the show. “We’re all hookers in one way or another,” Cutrone reflects a day later.

Feb. 16: For the under-12 set, the hot ticket this season is the Barbie fashion show in Bryant Park, which features plenty of editors sitting with their daughters as models show off life-size Barbie creations by the likes of Michael Kors and Marchesa.

Feb. 20: Brian Reyes’ models literally fall victim to the precarious high heels at his show, so the designer sends them out barefoot for the finale.

Feb. 20: Handbags worn as hats? Isaac Mizrahi upends tradition with a quirky, exuberant lineup where look names include the Xanaxer.

Feb. 25: Collaboration-friendly Stella McCartney does an exclusive collection for Net-a-porter.com, which will bow in May. She follows this in the fall with a venture for GapKids.

March 2: Miuccia Prada draws inspiration from the rustic look for fall, with looks such as fisherman-style waders and blanket-style wools.

March 5: While many luxury houses are scaling back in the recession, Dior is going in the other direction, installing thicker carpets in its stores and displaying more handbags. As John Galliano points out, “Dior was a house born postwar. It created a New Look that lifted morale and made women beautiful again.”

March 6: Olivier Theyskens shows his last collection for the house of Nina Ricci, which WWD dubs “a fantastical journey through fashion of the most spectacular sort,” complete with ultrahigh, heel-less shoes.

March 12: Jonas Brothers apparel for — who else? — junior girls will be sold at Wal-Mart, Sears, Kmart and J.C. Penney.

March 26: Thierry Mugler evokes his late-Eighties, early-Nineties glory days with designs for Beyoncé’s — that is, Sasha Fierce’s — upcoming world tour. The designer is also creative director of the tour, supervising the lighting and sets.

March 26: Matthew Williamson does a line for H&M with a peacock-feather motif and a vibe of “British boy on holiday in Cuba returning to England by way of Ibiza or one of the Greek Islands.” The line sells out in 11 minutes at the Fifth Avenue store.

March 31: Topshop opens in New York and celebrates with a multiday festival of parties and appearances by Kate Moss, Jay-Z and Jennifer Lopez.

April 16: Rachel Roy gets set to create a lower-price line for Macy’s, with apparel between $59 and $299 at retail, to be called Rachel Rachel Roy.

April 16: While his “dad jeans” moment is yet to come, President Obama draws some criticism for wearing a suit to walk his new dog, Bo. However, the look is still better than Nixon’s beach attire, which famously included wool dress pants and wing tips.

May 1: Henri Bendel will no longer sell apparel. Instead, the department store will focus on accessories and beauty items.

May 5: At the Met’s Costume Institute Gala, co-host Kate Moss made a splash in a Marc Jacobs lamé turban and dress.

May 7: Think Christian Louboutin’s scarlet-heeled pumps have displaced Manolo Blahnik stilettos as the fetishized footwear of choice? Tell that to the crowds at the Blahnik press sale. In the mayhem, a pregnant woman is nearly trampled by an overeager customer, and a fistfight almost breaks out between two Long Islanders warring for the same pair of shoes.

May 11: It’s back to the Eighties for “Gossip Girl,” which airs a flashback episode spotlighting Brittany Snow and Krysten Ritter in some of the decade’s most outré styles, from tweedy prep to all-out punk.

May 15: Jet-setter Karl Lagerfeld hits Venice — more specifically, the beach of the Lido — to show Chanel’s cruise collection. Days later, he’s off to Moscow to present the house’s Paris-Moscow collection.

May 20: Marios Schwab is named creative director of Halston.

May 21: Giorgio Armani returns to the atelier after battling a serious case of hepatitis. “Everything in the company is proceeding with the usual energy,” he says.

May 21: Brad Pitt takes a fashion risk at Cannes, in a petal-pink suit from Tom Ford. Fortunately for Brad, the effect is more dapper than “Miami Vice.”

June 16: Rodarte’s Kate and Laura Mulleavy win the CFDA Award for Womenswear Designers of the Year.

June 25: Michael Jackson dies. The King of Pop is remembered as much for his classic styles, such as his red leather motorcycle jacket from “Beat It” and his famous glove, as for his music.

July 1: Now that Beyoncé’s alter ego, Sasha Fierce, has become almost as famous as she is, the singer plans to launch a junior line under that name for back-to-school.

July 8: Christian Lacroix shows what may well be his last couture collection, opting for a far more restrained approach than usual.

July 9: Not since “Absolutely Fabulous” has the fashion world been lampooned so mercilessly — and aptly. Sacha Baron Cohen, in character as an over-the-top Austrian fashionista, crashes the shows of Stella McCartney and Agatha Ruiz de la Prada, and his antics are shown in the feature film “Brüno.”

July 28: Coach’s Reed Krakoff announces plans to develop his own apparel line, which will launch in fall 2010.

July 30: Almost as futuristic as freeze-dried space ice cream, but more practical, are the new swimsuit vending machines at the Standard Hotel in Miami, which deliver Quiksilver boardshorts automat-style.

Aug. 14: Dressing little Suri up in kitten heels isn’t Katie Holmes’ only design pursuit. She is readying her collection, Holmes & Yang, a “premium-designer” offering cooked up with her stylist, Jeanne Yang.

Aug. 25: Anna Wintour makes her first appearance on “The Late Show With David Letterman.” When the late-night host notes Vogue’s seat-of-the-Balenciaga-pants production schedule as depicted in “The September Issue,” the editrix parries, “You do it, too — you only called me on Friday.”

Sept. 4: Threeasfour announces plans to collaborate with Yoko Ono on its upcoming spring line, even incorporating some of her famous dot drawings into prints.

Sept. 9: Lindsay Lohan is tapped as chief artistic adviser to Emanuel Ungaro, succeeding Esteban Cortazar. Among her qualifications for this role, according to chief executive officer Mounir Moufarrige: “She changes outfits five times a day.” At her debut, her lineup lacks a coherent theme (unless liberal use of pasties qualifies as a theme), and the flashy looks draw jeers from the fashion press.

Sept. 11: Fashion’s Night Out draws shoppers with stars and zany activities. (Body painting by Zac Posen, anyone?) Charlize Theron makes an appearance at Dior, while Oscar de la Renta offers a serenade “to all the girls who wear my clothes.”

Sept. 18: In the most literal interpretation of “hard times” seen on the runways thus far, Ralph Lauren shows a Depression-era collection with looks such as ragged jeans and faded florals.

Sept. 18: In a presentation at the Apple store, Norma Kamali unveils several tech-savvy initiatives, including the use of Skype for customer service and an iPhone app that allows shoppers to purchase her pieces directly.

Sept. 28: Rei Kawakubo is teaming up with The Beatles on a line of co-branded handbags.

Oct. 6: The models smile and the clothes are equally happy as Stella McCartney shows her spring offerings in Paris. Even her background mural is optimistic, emblazoned with a giant paint-by-numbers “YES.”

Oct. 15: “Mad Men” has slews of fashion fans, including Michael Kors. Now the show’s costume designer, Janie Bryant, has signed an agreement for licensing deals and guest partnerships with designers.

Oct. 22: Stella McCartney unveils her children’s collection for GapKids, which is equally coveted by adults. The bandleader jacket is later sported by France’s first lady, Carla Bruni, during a performance.

Oct. 26: Before going high-end with The Row, Mary-Kate and Ashley Olsen got their fashion start with a long-running line of Wal-Mart merch. Now they are returning to the mass market, launching a junior line called Olsenboye for J.C. Penney.

Nov. 4: Isaac Mizrahi is plenty telegenic, and in a new venture, he’s pitching everything from tea sets and tartan pajamas to cheesecake — yes, cheesecake — on QVC.

Nov. 16: Despite the stream of tabloid headlines predicting their imminent breakup, Angelina Jolie and Brad Pitt appear to still get along well enough to design jewelry together. The baubles in question are a series of snake-inspired pieces for Asprey.

Nov. 17: Brooklyn-based Sophie Theallet wins the CFDA/Vogue Fashion Fund award, which she hopes to use to expand her three-person operation.

Nov. 30: Zac Posen will be the latest Go International designer for Target.

Dec. 3: It might be called “Life on the Huangpu” as Karl Lagerfeld plays skipper of a barge headed down Shanghai’s biggest river. The maritime setting is the backdrop to his latest Chanel Metiers d’Art collection for pre-fall.