Museum curators weigh in on leading fashion institutions' shortcomings and how to move away from a narrow, Eurocentric view on fashion.

LONDON — Fashion museums have not been exempt from the industry’s great racial reckoning.

Curators from across the world are in agreement that to date, the industry’s leading institutions have been collecting and showcasing the works of mostly white designers, catering to a white upper-class audience, encouraging a Eurocentric view of fashion — and at times perpetuating the biases the fashion industry has been built upon.

The way forward inevitably lies in broadening the scope of these institutions’ collections and curating new shows that recognize the largely overlooked contributions of communities of color in fashion.

But in light of modern-day thinking on cultural borrowing, how can curators in the West ensure they do so respectfully, in order to amplify and not appropriate the work of these communities?

Experts are yet to find the right formula, but part of the answer lies in embracing new perspectives, new collaborators and a new way of talking about fashion’s past, as well as its future.

“The traditional Eurocentric history of fashion is misleading: Fashion did not just start within Europe with the rise of capitalism and colonialism,” said Valerie Steele, director and chief curator of The Museum at the Fashion Institute of Technology. “Curators in the past would simply do a show about Orientalism or spotlight a Western designer who appropriated a culture without further comment, explaining the context of his designs. If it’s a French designer, for instance, their work should be framed within a context of French colonialism.”

By acknowledging these shortcomings, new opportunities arise for these institutions to use their platforms to educate audiences on fashion’s far broader cultural heritage and contribute to current debates on racism and social inequality.

According to Steele, many institutions are already working on broadening their scopes and updating their exhibition calendars with shows that spotlight African fashion, while museum staff are addressing the need to “diversify collections and the people that work on the collections.”

“It’s clear that you will gain new perspectives by doing so, it’s not just a questions of political correctness,” she added.

The Victoria & Albert museum in London has been among the first to address the need for a less whitewashed view on collections and exhibitions with the appointment of the designer and art historian Dr Christine Checinska as its curator of African and African Diaspora Fashion.

As part of her new role, Checinska is charged with growing “the global reach” of the museum’s collections and increase the representation of African and African diasporic fashions by way of researching and acquiring works from African fashion designers across the globe.

“My position represents an exceptional opportunity to direct the collection beyond the V&A’s existing holdings of textiles and fashion created by African designers and those of African heritage,” she said. “The V&A has a far-reaching platform and with that comes responsibility. Our international standing as a world-leading museum gives us a voice; a voice that is almost always heard. I intend to use that voice to tell new, layered stories about the richness and diversity of African creativity, cultures and histories, using fashion as a catalyst. Strategically my approach is to allow African fashion creatives to speak for themselves, about themselves.”

The current hierarchy of values in the fashion space, according to Checinska, has seen the design work of certain races and cultures excluded in Western fashion and cultural institutions.

With racial and social justice issues reaching a peak, the industry is overdue for crediting marginalized voices and ensuring that people of color begin to feel represented when they walk into a fashion museum.

“A shift in priority is long overdue,” Checinska said. “People of color are in a global majority. It is crucial that we see ourselves represented in exhibitions staged by leading cultural institutions. Furthermore, there is a long history of Black fashion and textile designers creating exceptional work; some under their own labels, some under the auspices of the major fashion brands. We have had a far-reaching impact on fashion and style. It is time that this is recognized.”

The need for better representation across the industry has long been mired in conversations around the issue of cultural appropriation. And while curators unanimously agree that the scope of museums’ collections and exhibitions needs to broaden, they also stressed that in order to amplify and not appropriate, these institutions need to engage experts from within the communities they plan to spotlight.

“It is vital to draw on expertise from the various communities under focus, remembering that expertise comes in many forms: The designers themselves, academics and researchers from the region, community representatives, audiences and wearers. We recognize that knowledge resides outside the institution as well as inside it,” said Checinska, who encourages the view of the curator as “facilitator” or “someone who allows others to speak.”

Matthew Yokobosky, senior curator of fashion and material culture at the Brooklyn Museum, also pointed to the need for collaboration and engaging with external guest curators — that will essentially define how an institution engages with different cultural communities.

“An exhibition can gain a richness and depth that is otherwise unattainable, [by engaging] with national scholars. Consider a necklace from the Congo being described by a scholar from the Congo versus the same necklace described by a Western scholar who did not grow up in the original context of the object. A national curator may bring an understanding that burnishes the description in a manner that cannot be school-learned,” said Yokobosky, citing the Brooklyn Museum’s 2014 retrospective on African-American designer Patrick Kelly, which tapped Thelma Golden, the director of The Studio Museum in Harlem, as guest curator.

The next generation of art historians and curators is also keen on delving into the history of design and designers beyond the Eurocentric view they’ve grown up with. 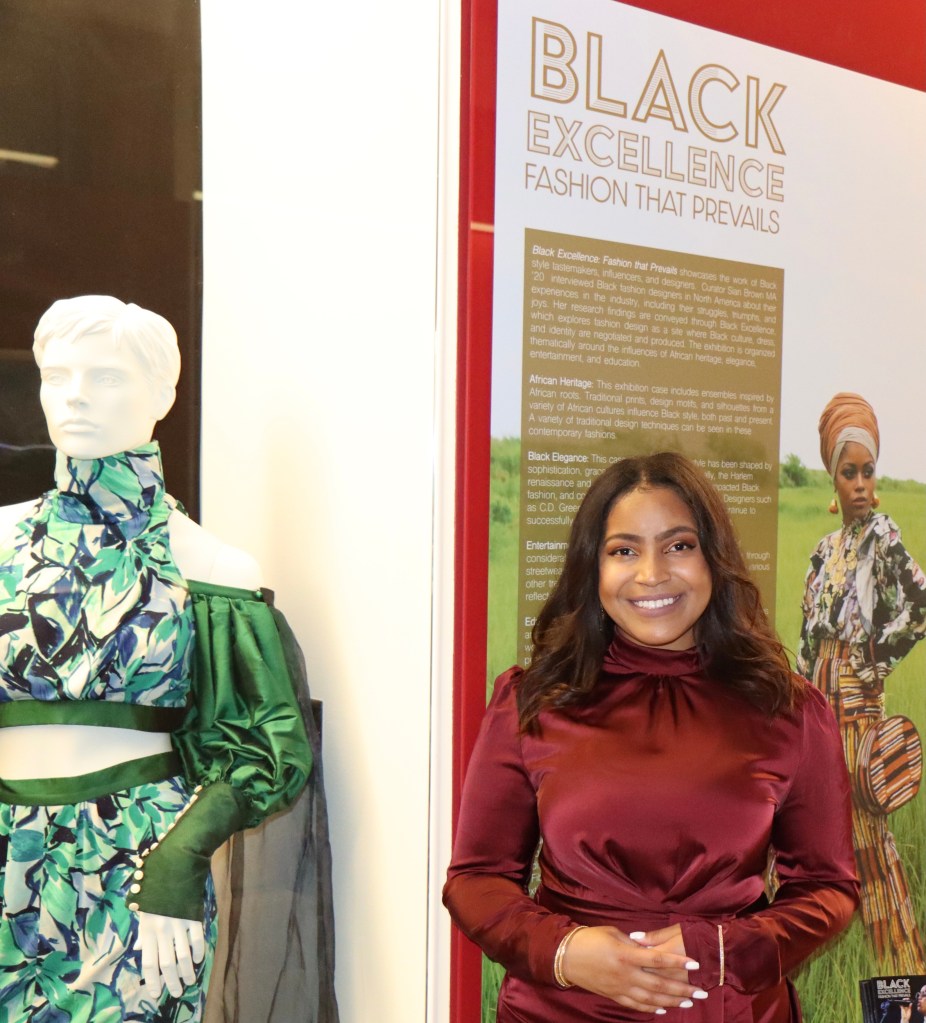 Sian Brown at the opening of her exhibition “Black Excellence.”  Courtesy of Malachi A.L. Shears

Sian Brown, a graduate of apparel design at Cornell University, recently curated the exhibition “Black Excellence: Fashion That Prevails” based upon extensive interviews with Black designers in North America.

“I was drawn to researching Black designers in hopes to understand what elements of their personal experiences drive their careers in fashion. One takeaway that was important to me was the shared resilience and confidence that they have, so the exhibition was a way to visually celebrate my research and the brilliance of Black designers with the public,” said Brown. “In a time when there is always critique around cultural appropriation, there is an audience that desires the knowledge to [learn to] respect the history behind various fashions.”

Browns’ faculty adviser and director of the Cornell Fashion and Textile Collection, Denise Green, pointed to Brown’s commitment of working directly with the designers and wearers who loaned her the exhibition’s pieces, as the respectful way forward.

“If we consider size-ism and fat phobia for example, we might ask: has a major museum ever mounted an exhibition about ‘plus-sized’ fashion. To my knowledge, the answer is no. Large-scale exhibitions hosted by major fashion museums often end up replicating the prejudices and exclusions perpetuated by the fashion industry,” argued Green. “We can only work towards redressing these biases by recognizing them and using our platform to share voices that have been excluded and discriminated against.”

Getting dressed every day, she added, is one of the few universal experiences shared by every person on the planet, so it’s only natural that people will want to learn more about different cultural approaches to dress.

“Fashion exists in all corners of the world, and the education on fashions that diverge from the dominant narrative is long overdue,” Green said. “The fashion exhibition is a profound and impactful platform for doing this.” 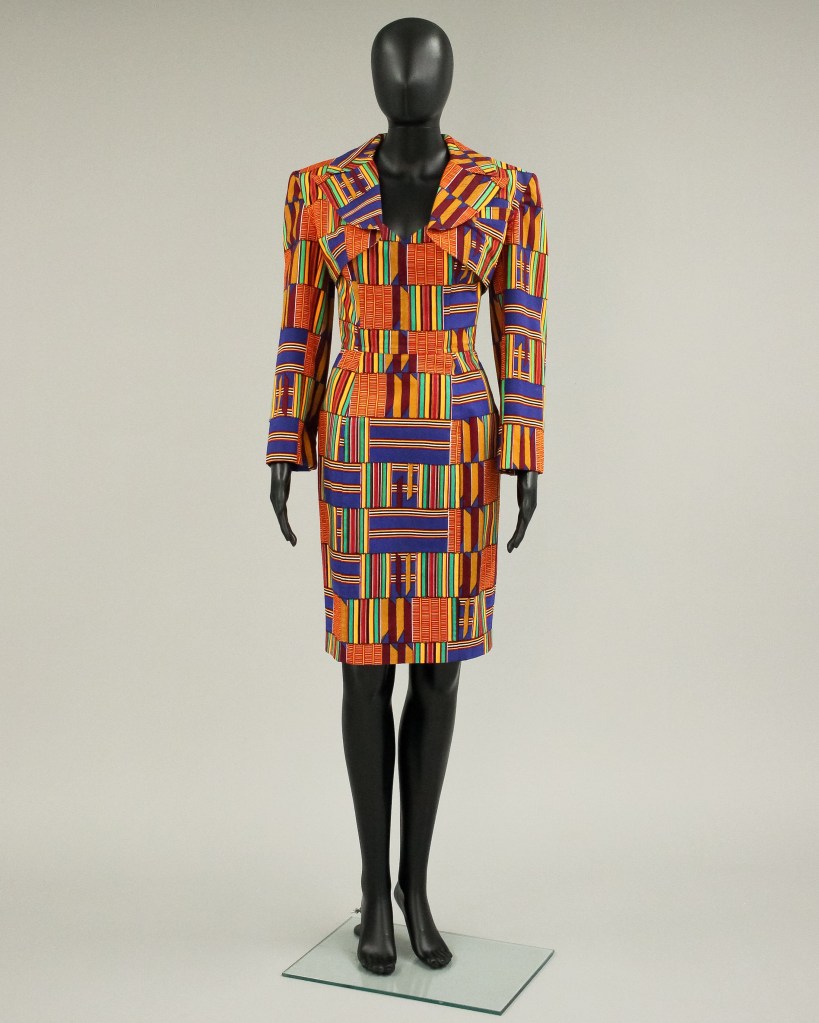 For Steele, who noted that interest may not be immediate when it comes to highlighting perhaps lesser known designers and creatives, there’s a bigger opportunity to welcome new audiences to fashion’s leading museums.

“The most popular exhibitions have been about the superstar designers which tend to be white males, because of fashion’s existing power structures. The traditional fashion museum audience has also mostly been white, upper-middle class, so they might not at first be interested by [non-Western subjects and topics]. But you get new audiences with new interests, once you change the shows you put on. Our mission is to educate and inspire diverse audiences, advance knowledge and highlight that there are many traditional fashion systems that have been co-existing,” she said, also pointing to recent efforts to acquire mannequins of different colors and body shapes, in a bid to represent anyone who might walk into a museum and “not just rich, white people.”

“Museums are not only about objects, they are about the history of people. However, certain peoples’ histories have been hidden or misrepresented. Some voices have been systematically marginalized,” said Checinska. “We have to play our part within the ongoing debates confronting racism and social inequality. We can do this via the exhibitions we create and the programming we generate around them. But we must also reflect such debates, particularly around race, through our collecting strategies, our staffing policies and our ways of thinking and being day-to-day at an individual and corporate level.”