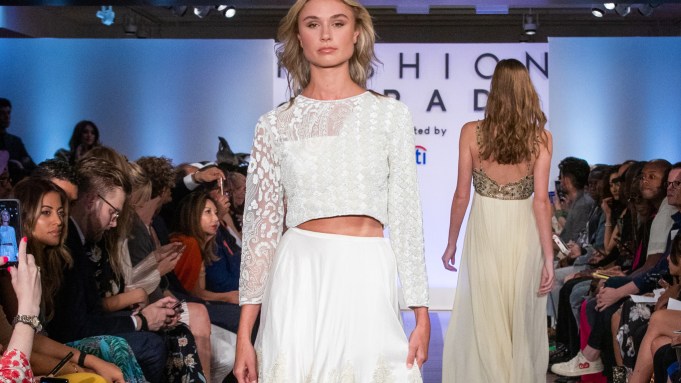 The night of rich culture and exciting fashion kicked off with an opening reception showcasing the upcoming auction “South Asian Modern + Contemporary Art,” followed by opening remarks from the event’s headline sponsor — Citigroup’s chief financial officer Mark Mason — as well as from the event’s educational partner, the dean of the Fashion Institute of Technology Mary David. A day after the runway show, FIT hosted a panel discussion about the evolution of South Asian fashion with the designers.

“It’s an emotional moment for me today because I only arrived [to New York] a year ago,” Siddiqui explained, taking the stage just before the designers emerged. “I was born and raised in Pakistan and spent most of my adult life in London. I was working in fashion and felt extremely passionately about South Asian art, culture, our heritage, our fashion…our amazing South Asian designers and the beautiful artisan craft they are doing back home. I wanted to do Fashion Parade so we could give designers a platform to showcase some of the most amazing designs they’ve been doing in both India and Pakistan.”

“I feel that Pakistan has been largely ignored and neglected. I want to champion that cause and change perceptions of that region,” Siddiqui told WWD prior to show day. Through ‘Fashion Parade,’ she aims to change negative perceptions through celebrating and showcasing 10 looks from six designers, who traveled all the way from India and Pakistan for the showcase.

“These countries have progressed and moved forward; there’s so much amazing stuff happening and I wanted to give a flavor of that tonight. I hope you guys can rejoice our designers. I’m extremely proud of them and proud they came all the way from India and Pakistan. I’m proud to be a Pakistani in New York,” Siddiqui exclaimed.

The lights went down, then up and the designs took the runway. Each designer — Ali Xeeshan, Elan by Khadijah Shah, Faiza Samee and Kamiar Rokni from Pakistan and Manish Chhabra and Payalk Chhabra of Delhi Vintage Co. and Gautam Rakha, Rahul Rabani, Shebani Rastogi and Ghazala Khan of Rabani & Rakha by Raaz from India — melded traditional, rich customs with modern trends and designs in a lineup that showed both diversity and depth through their 10 looks. First up was Samee, whose collection, Time Capsule, showcased beautiful kuchi dresses and tunics over palazzo pants, caftans and gowns offered in hand-embroidered jacquards, silks and velvets, hand-dyed with natural indigo, henna and turmeric dyes or emblazoned with hand-embroidered floral sprigs, paisley. A vibrant, patchworked velvet skirt under an embellished, decorative gold vest made for a standout look of the show.

Contrasting Samee’s more traditional take, Xeeshan’s models emerged in long, exaggerated headpieces made of painted plastic; his message in the collection about raising awareness of plastic pollution and the need to take widespread action. His designs — modern, enticing takes on the shirt dress (at first hidden underneath the headpieces) included sheer panels, gold embroidery, fringe and velvet. The best looks came encrusted in pearls.

The Delhi Vintage Co. designs then took — or rather jingled down — the runway; the duo’s more commercially accessible collection made up of easy dresses and skirts in hues of gold and green accented with strings of coins along hemlines or at the waist. An announcer over the speaker explained that the spring 2020 collection specifically was designed for, “this occasion where India and Pakistan showcase on a single platform. Love has no boundaries and no religion, sees no tradition and no culture. It is simply pure lovingness, which brings the world together.”

The most extravagant collection — both in volume and shine — came from Shah. “Signature craftsmanship and exquisite embellishments bring delicate yet flamboyant looks to life,” the designer had noted. The collection was filled with tulle, organza and chiffon gowns with larger than life on-trend puffed or poet’s sleeves and loads of shimmering embellishments.

The collective’s designs for Rabani and Rakha were regal, yet understated collection and felt like a fresh palette cleanse within the show. There were beautiful sheer layered sets or delicate pearl or tonal sequin embroidered tops and dresses. Fluid, contemporary cuts gave the brand’s traditional embroideries a modern look.

To close out the show, Rokni’s collection, Conversations, took the stage, which aimed to design “a collection that draws from visual and decorative elements across cultures, conversing on craft and identity to represent commonality over discord.” There were ruffle-sleeve tops, glamorous suiting and eveningwear; a floral and striped jacquard fitted playsuit with puffed sleeves proved standout.

The collections as a whole were enticing and all together made for a strong, diverse lineup. The event, which aimed to create awareness about South Asian art, culture and fashion, did so wonderfully with modern takes on traditional, beautiful costumes and craftsmanship.

What to Expect at New York Fashion Week in September