Staging her 20th fashion show, the Vietnamese-born events producer will show her collection on the Carnival Corp. vessel. 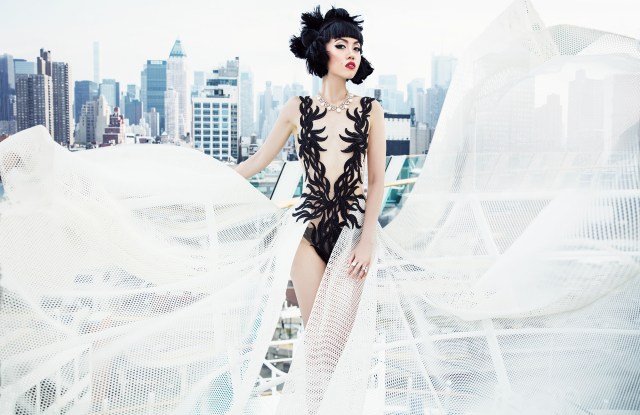 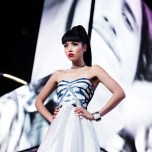 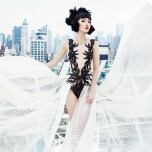 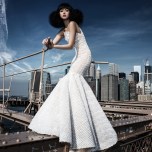 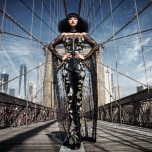 According to model and stunt fashion show producer Jessica Minh Anh, there isn’t ever a problem without a solution. At least when it comes to staging her publicity-driven global fashion shows that have taken place at numerous locations such at the Eiffel Tower, London’s Tower Bridge, the Skywalk over Arizona’s Grand Canyon and the skybridge between the Petronas Twin Towers in Kuala Lumpur.

The tireless one-woman show is in New York preparing her latest event that will take place Sunday aboard the Aidaluna, a cruise ship — part of the Carnival Corp. — which is in port for the weekend. Aside for her penchant for height — the show will take place atop the vessel’s sundeck — the staging is the third she has done this year on water.

Minh Anh got her start staging her first show post grad school in Birmingham, England. From the start, she approached them as a pay-to-play venture which, she says, “always needs to be a win-win for her and her partners.” Beyond the feat of securing permissions at such storied locations, grasping how the savvy go-getter funds these extravaganzas is even more mind-boggling.

Minh Anh explains it this way. She sunk her life savings — about $100,000 — into her second show at the then newly renovated Savoy Hotel in London. “I was a nobody and they weren’t going to give me that space for free.” The gamble paid off and the show, which featured eight designers including Paul Costello and Addy van den Krommenacker, was a hit. By the time she showed up to the London Bridges’ event committee to pitch her second London-based idea, she had secured sponsors such as Vidal Sassoon to fund the venture. Other corporate sponsors have included Marriott Hotels, Costa Cruises, a division of Carnival Corp., Lancôme and Redken.

The designers that participate also pay to be a part of the spectacles. As she puts it: “If they want my models to wear their dress, they pay for it. It is simple as that.” Minh Anh keeps the fees that are paid closely guarded and swears her designers to secrecy. An article printed in the Omaha World-Herald reported a participant in the Eiffel Tower show paid $15,000 to be a part of it but was then asked to remove it from their online version of the story.

Considering the designers Minh Anh gathers from around the world, found mainly on the Internet, could spend three times that much and not get near the amount of press these shows garner, it is relatively a bargain. Each designer gets assets to use as they see fit — a set of photographs from the catwalk and a video.

Minh Anh controls every aspect of the show and leads a 60-person team to execute. Everything from the hair and makeup is dictated by the producer. “They are participating in my show,” she said as she also walks in her shows and has become a personality beyond a model, often appearing in campaigns for the designers in the shows. She employs a non-traditional runway photographer, John Oakley, to shoot. The show in New York Sunday will feature designers from Romania, Poland, Lebanon and Peru, among other places.

Rouba G., who refers to her label as “prêt-a-couture,” started her Lebanon-based business two years ago and began participating in Minh Anh’s shows from the start.  “My customers in the Middle East especially love to see my clothes associated with a famous model (Minh Anh).”

The designer said staging her own show in Lebanon would cost her about $20,000, but to what end? “Of course, I am proud to be a Lebanese designer but mainly my sales focus is in Europe and the U.S. so I need to present to those markets. Jessica’s shows give me the international press exposure my brand needs.” The designer said all she is required to do is deliver her collection to Minh Anh who then takes on the execution and art direction A-to-Z. The designer says her next goal is to present at London Fashion Week in 2017.

Peruvian-based designer Ani Alvarez Calderon, who has been showing collections since 2000, will show with Minh Anh for the second time Sunday on the Aidaluna. Her entry fees were sponsored by the Incalpaca textile firm, known for fabricating the traditional cloth.

For her first show on the Le Jean Bruel, a Bateaux Mouche in Paris, Calderon said, “It was really incredible to hand over my dresses to Jessica and to sit as a spectator watching my own clothes on the runway. Jessica takes care of the lineup, etc., I had nothing to do, no worries.” She was not expecting the amount of serious offers to build her brand that came after, even those through the model’s self-focused social media posts.

This time however, she sent her assistant to New York as she is prepping 15 gowns for models and guests to wear at Mario Testino’s Gala for El Mate museum in Peru Saturday evening. Her 10-piece collection took inspiration from three regions in Peru — the jungle, the highlands and the coast — especially the traditional “Paratas” prints it is known for.

Sunday’s show on the ship’s tented sun deck is more controlled than previous ventures where she battled time constraints and weather. Her event at a solar power plant outside of Seville, Spain was subject to a massive downpour two hours prior; in her Grand Canyon show, models braved cool temperatures while the guests sat comfortably with space heaters. Time was the obstacle on the Tower Bridge having exactly two hours to set and and execute. Ditto the Eiffel Tower, which took place at 7:30 a.m. to accommodate the prompt 9:30 daily opening of the Iron Lady.

The 29-year-old is showing some battle weary signs from the hectic pace producing the shows takes. “I have a problem with my legs,” she said which were visibly swollen at the interview due to a vein condition. Seeking medical attention here in New York, the advice dispensed was rest. Given the ambitious producer’s thirst for glory, that won’t be happening soon.