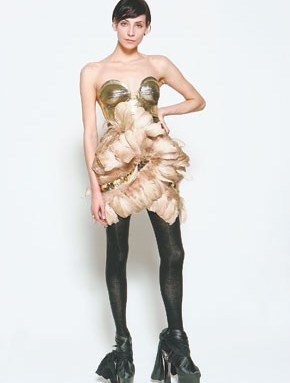 Karl Lagerfeld knows a thing or two about wool — 54 years ago in Paris he emerged on the world stage alongside Yves Saint Laurent after winning an International Wool Secretariat competition.

Tonight in Florence, and once again linked with wool, Lagerfeld, at the very least in name, will help shine the spotlight on another emerging fashion talent: Jean-Pierre Braganza.

Braganza is one of five “Protégés” who have been handpicked and mentored by five top figures in fashion for the development of an Australian merino-based capsule collection. His Lagerfeld-guided collection will be unveiled tonight at the Palazzo Corsini, alongside those of Kristian Aadnevik (Donatella Versace), Ioannis Cholidis (Paul Smith), Julian Louie (Francisco Costa) and Sandra Backlund (Italian Vogue editor Franca Sozzani).

The Protégé Project is an initiative of Australian Wool Innovation, the industry’s marketing arm, and was launched as part of the 2007 bicentenary celebrations of the export of the first bale of Australian merino wool.

Beyond a number of recent collaborations with Australian fashion names including Josh Goot and Jayson Brunsdon, whose New York Fashion Week shows have been sponsored by AWI, the Protégé Project represents the first major promotional collaboration between the industry and the international fashion community since 1988, when nine designers, including Kenzo, Claude Montana, Sonia Rykiel and the late Gianni Versace, flew to Sydney to take part in the Bicentennial Wool Collection show at the Sydney Opera House.

The collections will travel to Australia, China and Japan later this year. There are no plans at present to put them into production.

Compared with Lagerfeld and Saint Laurent in 1954, some of these fashion designers are already relatively well-established.

Arguably the best suited of all five designers to the wool brief, Backlund says her Protégé collection proved a case of art imitating life.

“My work is always very personal to me — I improvise a lot and allow myself to lose control and see what happens if I do not think so much about trends, seasons, wearability and what other people want from me,” Backlund said. “In the beginning of this project, I had a faint idea that I would work with injuries, bruises and the healing process of body and mind. I did not know why at that time, but then I suddenly lost someone very close to me and it turned out I have to literally live that while working on this collection.”

With Louie is already on Francisco Costa’s design staff at Calvin Klein, the question begs to be asked: Do any other mentors envisage future collaborations with any other Protégés? Aadnevik’s sexy, embellished eveningwear, for one, seems to be a perfect fit for Versace — and Donatella Versace appears to agree.

“Kristian Aadnevik’s work is very high in spirit with Versace,” Versace said. “It’s full of glamour and sensuality, but with a sense of rock ‘n’ roll that makes it very contemporary.”

Noted Aadnevik of the Versace nod as a wool Protégé: “When such a big, established name chooses you, this automatically tells people that this is a man to look out for — it creates a buzz and a hype which is very positive and important for someone at the beginning of their career. It is so hard to succeed in this industry, and something like this project really makes a difference and puts you in the spotlight.”

He added, “I try not to expect too much — I never do. Whatever you do in life it is up to yourself in the end. The project alone will not make you a star — you always have to prove yourself worthy. I am very happy with the designs for the collection that I will present in Florence and I think it will be a success. For the future, I hope that Versace will like the presentation and that they maybe want to continue working with me. To design for a house like Versace would be a dream.”