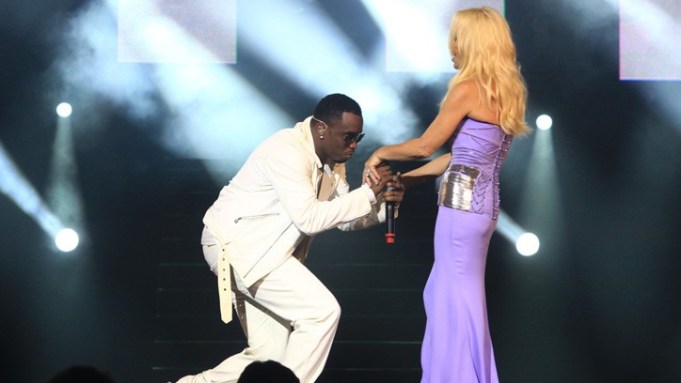 Lest anyone miss the hoopla of “Fashion Rocks,” it’s back, at least in South America. For its fourth international iteration, the fashion show-concert hybrid, once helmed by Condé Nast Publications in New York, headed to Rio de Janeiro last weekend with the help of Brazilian telecommunications conglomerate Oi. And an impressive roster of talent followed. Versace, Marc Jacobs, Givenchy and Calvin Klein provided a major international fashion presence, while Lenny, André Lima, Alexandre Herchcovitch and Lino Villaventura represented the local contingent. Meanwhile, Diddy, Estelle, Ciara, Ja Rule, Grace Jones and Mariah Carey held up the “rocks” portion of the evening.

While the main event took place Saturday night at Rio’s Jockey Club, it was actually a three-day affair, beginning on Friday with a charity dinner hosted by Donatella Versace at the Copacabana Palace and wrapping up Sunday night with a Calvin Klein Jeans and Underwear party on the rooftop of the Fasano hotel in Ipanema.

If the point of such an elaborate excursion, which drew 79 models in addition to the designers, singers, p.r. and production teams, is exposure to a gigantic market like Brazil, there are worse places to do it than Rio. “I came to Brazil the first time for a few days 15 years ago and I always want to come back,” said Versace. “The colors are amazing. There’s lots of energy and young people.” And the latter are apparently an eager fashion audience. Not only did they fill the arena’s 5,000 sold-out seats — at $1,000 a ticket — but the social-media-obsessed Brazilians reportedly drove the event to Twitter’s number-one trending topic on Saturday night. Not a bad teaser to the televised version, which airs locally next month.

Highbrow it was not, but it certainly was a spectacle. The actual show, which was hosted by Brazilian model-actress-TV host and Heidi Klum doppelgänger Fernanda Lima and styled by Katie Grand, was a music-meets-runway mashup: Each house presented selections from its fall collection alongside a live musical performance. Diddy and Versace were the first out, setting a sexy tone. When Lima asked Diddy what he liked most about Brazil, he didn’t hesitate: “The women. Brazil has the most beautiful women in the world.” To his point were performances by pop singer Wanessa and sultry samba dancers, as well as Brazilian beauties Isabeli Fontana and Alessandra Ambrosio, who walked in the show.

Still, there was no shortage of sizzle from the imports on the lineup. Grace Jones serenaded the Marc Jacobs collection (Jacobs didn’t make the trip) in outré headgear and a parachute cape, which, thanks to a wind machine and Jones’ exhibitionist inclinations, routinely lifted up to reveal her bustier-and-thong ensemble. On the younger side of the provocateur spectrum was Ciara, flaunting her joint-defying flexibility while performing for Givenchy in black bondage gear and vertiginous heels.

“Eleven centimeters,” noted an impressed Riccardo Tisci, who had just met Ciara at her fitting. “She is beyond. She has the voice, the energy and the body.”

At the end of the night, it was all about the intersection of major music, fashion and Brazilian culture. The grand finale celebrated all three points by way of Carey and Calvin Klein, where a Brazilian, Francisco Costa, is at the helm of the iconic all-American house. Costa, who has lived in New York for nearly 20 years, considered “Fashion Rocks” a homecoming of sorts, one that he admitted came with a lot of pressure. “I was really nervous,” he said of showing in front of his hometown audience, though he looked completely at ease when he took his bow flanked by Ambrosio and Izabel Goulart. The same could not be said for Carey, who could barely move in her corseted mermaid gown (not a Calvin Klein design, the house noted). Not that the crowd, who went wild when she went on, seemed to care.

In fact, carefree was the predominant attitude all weekend. By the time the fashion crowd, including Tisci, Dree Hemingway, Astrid Muñoz and Mario Testino, hit the Fasano for the CK party Sunday night, everyone was dressed down in jeans, tracksuits and a giant floral caftan if you were Brazilian designer Dudu Bertholini. Or wearing nothing at all in the case of one male model, whose strategic position in the pool prompted one guest to ask, “Remember that ‘Seinfeld’ episode?”