NEW YORK — Eco-friendly is not exactly a buzzword in fashion. But with their FutureFashion runway show today, Earth Pledge, a nonprofit environmental agency, along with Julie Gilhart, fashion director of Barneys New York, hope to change... 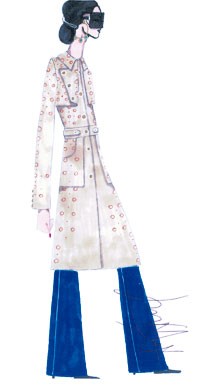 NEW YORK — Eco-friendly is not exactly a buzzword in fashion. But with their FutureFashion runway show today, Earth Pledge, a nonprofit environmental agency, along with Julie Gilhart, fashion director of Barneys New York, hope to change that.

“This is the first fashion event we’ve ever done,” noted Leslie Hoffman, executive director of Earth Pledge, which was founded in 1991 after it originated as a United Nations committee chaired by Theodore W. Kheel. “Christo’s exhibition in Central Park and the orange fabric he is using really inspired us and got us talking about fabric and fashion.”

The show is part of Verdopolis: The Future Green City — a “greenprint” for an ecological urban environment taking place today through Friday at 4 Columbus Circle — which also includes LeadersSummit, where the latest developments in sustainability across sectors will be discussed, and FutureCity, an interactive exhibition.

“What I love about this is that they are all New York designers and they run the gamut — from Oscar to Libertine,” said Gilhart.

Valley used a recycled polyester for his coat design, which features an abstract dot motif. “I was inspired by its David Hicks wallpaper print quality, which is very bold and reminds me of a house in Palm Beach in the Seventies,” he said.

Chow, meanwhile, chose three fabrics for his look: a red organic cotton herringbone twill, a Tencel and cotton sheer stripe and a brown organic cotton twill. “Most importantly was that the quality of these fabrics was great and it’s always difficult to find great quality casual fabrics,” he said. “Also, I wanted to use the recycled cola sequins that was my signature from spring ’05 and the red twill works great with it.”

Gilhart, for one, hopes the show will begin to forge a new frontier in fashion. “In the next 20 years, I think fashion will be talking a lot more about how to be a more ecologically sound industry,” she added.

After the show, the designs will be displayed in the windows of Barneys on Madison Avenue from Feb. 15 to March 8 and then silently auctioned to benefit Earth Pledge.