Paolo Melim Andersson, the new creative director of Chloe, already has beefed up his studio. 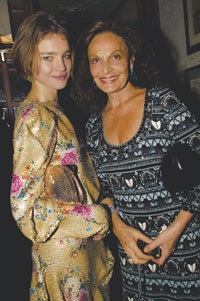 A WOMAN’S TOUCH: Paolo Melim Andersson, the new creative director of Chloé, already has beefed up his studio. The Swedish designer, who joined Chloé from Marni in October, has tapped Vanessa Bellanger, who previously had worked behind Lars Nilsson as studio director at Nina Ricci. Bellanger is also an alumna of Polo Ralph Lauren and John Galliano. Her title at Chloé is style and image director.

IKEA IDEA: Speaking of Lars Nilsson, he’s launching a signature furniture collection. The former Nina Ricci designer, who turned up at a François Lesage event in Paris Wednesday, said he’s teamed up with the Swedish furniture manufacturer Josef Frank to produce his designs, along with some interior textiles. “It’s a product I’ve wanted to do for such a long time,” said Nilsson, who was heading to Stockholm to present an award to Dita Von Teese, who topped Swedish Elle’s international best-dressed list. Nilsson was mum, however, on his comeback plans for fashion.

NIGHTLIFE: Graydon Carter might not have been able to come to Paris to host the dinner Vanity Fair threw for Michael Roberts and Diane von Furstenberg Tuesday night, but Carter’s replacement, Bob Colacello, and the designer herself were extra-attentive hosts. As the likes of Valentino Garavani, Arielle Dombasle, Betty Catroux and Christian Louboutin sat down for a salmon and caviar feast, von Furstenberg made a quick round to all the tables, cooing, “Is everyone all right?” and dispensing assorted fashion advice. “Never go without décolleté,” she counseled Vanity Fair’s Alexis Bryan, leaning forward in her scoopneck dress. No sooner had she exited than Amy Sacco and Natasha Fraser-Cassavoni, both in plunging black outfits, perked up their posture, prompting Elizabeth Saltzman and Astrid Munoz to pull out their digital cameras and capture their cleavages. A packed and buzzy cocktail hour included cameos by Katie Holmes and Victoria Beckham, looking extra chic in a bulbous Viktor & Rolf dress.

Sacco, in Europe readying her new club at the Saint Martins Lane hotel for a September opening, also let slip she’s teaming up with Joe Boxer founder Nick Graham to launch a range of products, including sleepwear.

On Wednesday, von Furstenberg had more serious business as the new Council of Fashion Designers of America president, meeting with her Milan, Paris and London counterparts: Mario Boselli, president of the Camera della Moda; Didier Grumbach, president of France’s Chambre Syndicale, and Hilary Riva, chief executive of the British Fashion Council, respectively. Von Furstenberg described the meeting as friendly and constructive. Although no decisions were made, she said discussions centered on 2008 fashion week dates (with a will to make them a tad later) and the skinny-model issue. On the latter point, she said all were in agreement in principle: “We want to give guidance and promote health as beauty.”

TRAVELING PAIRS: The Vanity Fair party wasn’t the only stop for Katie Holmes and Victoria Beckham on Tuesday night. The BFs made their rounds of Giorgio Armani’s new Avenue Montaigne flagship that evening, as well. “I’m going to shop for baby clothes,” said Holmes, who, when last in Paris, went on a shopping spree with the British pop songstress. Meanwhile, Tinsley Mortimer and Amanda Hearst made their grand appearance at the event, fighting off paparazzi as well as jet lag. “We just flew in for the event this morning,” said Mortimer, who noted that she was working hard putting the final touches on her handbag line.

COMEBACK KID: Sybilla, the high priestess of Spanish ready-to-wear in the Eighties, is riding a comeback wave and plans to stage a runway show March 4 during Paris Fashion Week. Now 43, she’s going strong in Spain with her two brands — namesake label Sybilla and a junior line called Jocomomola (roughly meaning, “Geez, how cool”). Sybilla recently tapped Arnaud Maillard from Lagerfeld Gallery as her new lead designer. Vanessa Bruno, designer of the high-end French contemporary brand, said she will make her runway debut that week, too. Her location is yet to be revealed, but Bruno said she hopes to put a fresh spin on the catwalk.

PUMA HEARST: Puma is breaking into New York Fashion Week on Lydia Hearst‘s arm. After modeling the brand’s French 77 global launch event in Monaco in October, Hearst partnered with the active brand on the limited-edition Puma Lydia Bag by Heatherette, codesigned with Hearst’s longtime friends Richie Rich and Traver Rains. The bag — a custom-leather version of Puma’s terry cloth racquet grip bag from its new French 77 collection — will make its runway debut at Heatherette’s Feb. 6 “Over The Rainbow” show, in which Hearst is modeling. “Puma gave me the opportunity to see a new side of the fashion world,” Hearst said. “I am a model, of course, but this has given me a glimpse into the designing side.” Puma is making only 100 bags, most of which Hearst is giving to her friends. A limited number will be sold, for upward of $500 each, at Puma Black Stores in Tokyo and in New York’s Meatpacking District in May. The bag comes in three versions: delicate, night and wild. Hearst also will auction a bag for the Designers for Darfur Charity Feb. 9, for which she is co-chair.

NICE THREADS: “Embroidery without a dress is like a book without a reader, but a dress without embroidery is like Bastille Day without fireworks,” embroiderer extraordinaire François Lesage said Wednesday as he was elevated to Officer of the French Legion of Honor by French minister of culture Renaud Donnedieu de Vabres. Well-wishers crowded dozens deep into the gilt salons of the ministry for the midday ceremony. “Lesage belongs to a rare breed that is disappearing,” said Pierre Bergé. “He is a master artisan.” Marisa Berenson, who noted that Lesage’s father, Albert, did embroideries for her grandmother, Elsa Schiaparelli, marveled at the riches of the house, now owned by Chanel. “There [are] drawers and drawers of the most extraordinary things. Treasures!” she enthused. “He’s such a nice man, too.”