ACE OF CLUBS: Maxim’s maxed out on parties on Tuesday night, when Pierre Cardin’s restaurant and nightclub hosted not one, but two, mondain dinner parties. The first was the inaugural bash for Maxim’s International Club, a new... 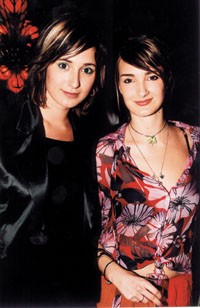 ACE OF CLUBS: Maxim’s maxed out on parties on Tuesday night, when Pierre Cardin’s restaurant and nightclub hosted not one, but two, mondain dinner parties. The first was the inaugural bash for Maxim’s International Club, a new club for Europe’s most social set, including guests Inès de la Fressange, Fiat heir John Elkann, Cordelia and Hubert Lanvin, the young princesses Elisabeth and Maria Theresia von Thurn und Taxis, Delphine and Antoine Arnault, Lorraine Ricard, Phoebe Philo, Thaddeus Ropac, Olivier Picasso and Pierre Pelegry. Meanwhile, in the back salon, Johnny Pigazzi and Olga of Greece, Paola Cussi, Pauline Karpidis and other art lovers paid homage to modern master Cy Twombly, whose latest show just opened at the Pompidou Center. Princess Firyal of Jordan was bound for one of the parties — although it wasn’t clear which — and she never quite made it there. After a sweeping entrance descending from a chauffeured Rolls-Royce dressed in furs and spectacular JAR earrings, she disappeared into the mist. The earrings were not forgotten, however. “They were incredible,” cooed young socialite and jewelry designer Ana Lucia de Teresa Addam, adding that her husband Nick doesn’t let her indulge herself so spectacularly. “He’s a tough cookie, darling,” she said. “He’s Scottish.”

CUSTOMER SERVICE: With smaller shows and fewer celebrities this season, clients have become the focus of the Paris couture season. Case in point: the blitzkrieg of flashbulbs when Daphne Guinness, towering on gold platforms, with her eyes sheltered by major wraparounds, arrived at Valentino on Tuesday night. Alas, Valentino regular Gwyneth Paltrow had to cancel at the last minute, leaving other blondes to bask in the press attention. “I love the theatrical side of couture,” said Pia Getty, who, along with her sister, Alexandra, was quizzed endlessly about her intentions. “But I only buy once in a blue moon, unless, of course, it’s really fantastic.” In couture, as in many things, where there’s a will there’s a way — and even the strong euro might not stand in the way of Suzanne Saperstein’s high-fashion habit. Perched front-row at the Scherrer show, she answered a question about high prices with a smile, saying: “I have to be very nice to my husband now.”

NICK OF TIME: With the couture winding down, the fashion flock’s thoughts are turning to the ready-to-wear circuit. And it turns out Nicolas Ghesquière, who has bounced his Balenciaga show between Paris and New York, is staying put again this season. A spokeswoman for the designer said on Wednesday that Ghesquière would present his fall collection during Paris fashion week at the Balenciaga showroom on Rue Cassette.

FASHION MEMORIES: It was a trip down fashion’s memory lane at La Grenouille on Wednesday as Adolfo and former fashion mogul Maurice Bidermann both popped in for lunch — at separate tables, of course. Bidermann said he’s busily working and still comes to New York regularly. But he doesn’t find the city as inspirational as it once was. So where is he these days? “Italy,” said Bidermann without pause. “There’s a lot going on there.” Provided one can avoid all those recent strikes…

ART ATTACK: It appears as if Hermès has spared no expense in mounting its latest gallery exhibition, “Bruce Davidson: Subway” on view from Friday through Feb. 28 at the Hermès Gallery at 691 Madison Avenue. The photographic exhibition coincides with the 100th anniversary of the New York subway system.

Besides mounting the show, the company produced color posters publicizing it and bought billboard space in Chelsea, TriBeCa and SoHo. Hermès also dedicated its windows to Davidson’s theme. One features a large subway map as the backdrop for spring shoes. Another window is designed to look like a subway car.

Of course, this being the “H” train, seats are covered in Hermès’ signature orange suede and the train is spotless. Hermès’ Cheval Surprise scarves, which look like Jackson Pollack canvases, hang like paintings in place of ads for dermatologists and classes in English as a second language. The mannequins riding the subway carry Kelly bags.

Hermès designed a limited-edition MetroCard holder for $150 to be sold exclusively at its Madison Avenue store.

SHOWING THEIR COLORS: Politics can be less than pretty, as was the case when four panelists swatted around ideas Wednesday morning while moderator Lesley Stahl kept the peace.

Cuomo griped over the Bush administration’s overspending for nonsecurity purposes, the ever-shrinking job market, and what he claimed was the administration’s reluctance to say how many Iraqis have been killed in the war. And, sounding a note familiar to the American textile industry, he voiced concern about China’s increasing ability to churn out high-skilled workers — one in five now fits that bill.

Not all the banter fell along party lines, however. Zimmerman pointed out, “The hottest bumper sticker in New Hampshire says, ‘Dated Dean. Married Kerry.’”

PRIMP’N’CURL: Celebrities honored the men and women who make them look so good at the 5th Annual Hollywood Makeup Artist and Hair Stylists Guild Awards Saturday night at the Beverly Hilton. Among those who came out were Tom Hanks, who presented Daniel Striepeke with the makeup lifetime achievement award, and Lucy Liu, who gave hairstyling honors to Colleen Callaghan. “I’m sure a lot of you out there are familiar with ‘the goop,’” said Hanks. Referring to the copious amounts of makeup it took to de-glam Nicole Kidman and Charlize Theron for their roles in “The Hours” and “Monster,” presenter Jennifer Coolidge said, “My hat’s off to you girls, but I just want to look pretty.”

MOUNTAIN HIGH: In just five short years, the William Morris Agency and Details (WWD’s brother magazine) have managed to cultivate the party to hit at the Sundance Film Festival. So it was only natural that the talent agency chose to toast itself with a “birthday” party Monday night. With Sean John as the sponsor, L.A. event planners Bryan Rabin and David Rodgers went for a Harlem jazz club theme complete with black vinyl booths, red and black Mylar curtains and black gardenias strewn everywhere in The Shop, a Park City yoga studio in a converted warehouse. Among the 600 guests standing seven-deep at the doors before they opened were Andre 3000 of Outkast, Naomi Watts, Kevin Bacon, Kyra Sedgwick, Peter Fonda, Amy Smart, Mark Ruffalo, Paris Hilton and Aaron Carter.