ALL SHOOK UP: A traffic bottleneck prevented Priscilla Presley, her daughter, Lisa Marie, and granddaughter, Riley Keough, from gracing the front row at the Dolce & Gabbana show on Friday. Instead, the trio of Presley... 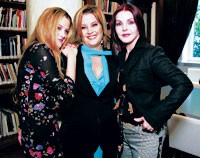 ALL SHOOK UP: A traffic bottleneck prevented Priscilla Presley, her daughter, Lisa Marie, and granddaughter, Riley Keough, from gracing the front row at the Dolce & Gabbana show on Friday. Instead, the trio of Presley women watched the last bits of the presentation from backstage. Later that night, however, they made up for the lost photo op, joining Domenico Dolce and Stefano Gabbana for the launch party of their new book, “Music.”

“They took such good care of her,” she cooed. Meanwhile, Riley said that it was back to school after the Milan trip, while mom Lisa Marie was preparing for the release of her second solo album in the spring. As for the Elvis T-shirts shown on D&G’s spring runway, the women said that they already had their orders in.

No, it’s not Tom Ford, but Roberto Cavalli. Cavalli has teamed up with Dino De Laurentiis to produce a movie inspired by Boccaccio’s “Decameron.” The pair are investing between $20 million and $30 million.

“I’ve wanted to work in the movie business for years, but I don’t want to be considered a costume designer,” said Cavalli. He said he’s contemplating a 14th-century look, with clothes in soft, dusty colors. Shooting of the film, to be directed by David Leland in Tuscany, is slated to start in March.

Meanwhile, among the guests at Cavalli’s show on Saturday was Nicole Murphy, wife of actor Eddie Murphy. He stayed home with the five kids, while she enjoyed a fashion break in Milan. The statuesque former model took in the opening of the René Caovilla store — and Versace, too. “I’m having so much fun here I even lost my voice,” Nicole said hoarsely.

GALAXY QUEST: After a Milan season slim on A-list celebrities, Paris fashion is promising a galaxy of stars. Besides Nicole Kidman, who will be the guest of honor at Chanel’s show on Friday, word has it that Gwyneth Paltrow is headed for Paris, for, among other things, a private birthday celebration hosted by her friend Valentino Garavani.

Ashley Judd and Kevin Kline are expected to attend the French premiere of “De-Lovely” on Tuesday night, along with Giorgio Armani, who provided costumes for the film. Expect a mob scene on the Champs-Elysees.

COAT TALE: Donatella Versace may not have had any celebrities at her show on Saturday night at the close of Milan fashion week, but the designer is hardly neglecting her famous friends. This week, when “Shall We Dance?” premieres in New York, moviegoers will see Jennifer Lopez wearing a Versace coat that is not only fabulous, but pivotal to the storyline. The suede number with a fur collar attracts the eye of co-star Richard Gere and sparks their friendship. We won’t give away the ending, but it’s not a happy one for the coat. Let’s just say there’s a little incident with pasta.

SNAP DECISION: Photographers won’t be having an easy time chez Chanel this season. Not only has the French fashion house instituted a contentious dress code for all camera-carrying guests, it’s also denying backstage access.

A Chanel spokeswoman said that there is simply not enough room, given that Karl Lagerfeld has booked some 80 fashion models.

Meanwhile, there’s a new theory about why Chanel wants all the photographers to dress in black suits and white shirts. Sources hint that the show will reprise the climactic scene for the forthcoming commercial for No. 5 perfume, in which star Nicole Kidman confidently faces a pack of sharp-dressed paparazzi.

Chanel is keeping the decor and theme of the show under wraps. The No. 5 ads starring Kidman break in U.S. theaters on Oct. 29.

OSCAR’S LADIES: Teresa Heinz Kerry and First Lady Laura Bush were in fact having an Oscar moment after Thursday’s presidential debate. Even though the showdown between their husbands turned frosty at times, the pair greeted each other warmly and admired each other’s Oscar de la Renta suits. But the designer isn’t playing party favorites. He declined to comment Friday.