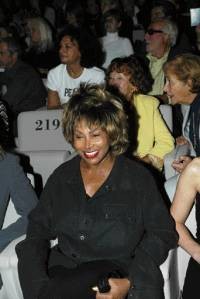 ARMANI-DOME: Although she arrived in a discreet black pantsuit, Tina Turner caused quite a stir when her car pulled up at the Giorgio Armani show Monday, with some fans offering spontaneous applause. Told that short skirts have been steaming up the Milan runways, the ever-leggy Turner broke into a wide grin. “I know,” she said. “I bought a few already.” Asked where she acquired them, she laughed and said, “I can’t tell you that.” Armani’s show was chock-a-block with star wattage — including George Clooney, Mira Sorvino, Sophia Loren, Joely Richardson, Kim Cattrall and 6 foot 5 Australian swimming sensation Ian Thorpe. His interest in fashion is deeper than you might think. “I’ve designed some jewelry in Australia,” he said. “The piece is a South Sea pearl on a rubber band with gold around it. We’ve already sold out of it.” And you were maybe thinking he was a fish out of water?

Conspicuously absent from the star-studded crowd was French Vogue’s Carine Roitfeld — or anyone else from the magazine for that matter. It seems that Armani, who’s already at war with American Vogue and pulled his advertising from the magazine earlier this year, also has a beef with its Paris cousin. Roitfeld declined to comment. But a spokesman for Armani offered a blunt explanation. “They have not been very interested in the collection the last two seasons and we were short on space,” he said. “We wanted to invite people who are interested in the collection.” Meanwhile, Anna Wintour and her team were present, but seated in Siberia of sorts — off to the side of the theater-style stage.

FIT, FIT FERRE: Karl Lagerfeld did it first and now it’s Gianfranco Ferré’s turn to shed the excess weight. The Italian designer has been working with a Milan-based diet doctor and the results are impressive. Since spring, he’s lost some 67 pounds and says he’s committed to losing more. “Diet, diet, and more diet. It’s the only way,” said Ferré, who was invited by friend and Burberry chief Rose Marie Bravo to attend the Prorsum show last night. So will Ferré follow Lagerfeld’s lead and write a book on his success? “It’s unlikely,” he said. “First I have to finish losing the weight.”

HOT NUMBER: Nicolas Ghesquière doesn’t show his spring 2003 collection until Saturday in Paris, but one of his handbag styles for the season is already being tipped by retailers as the next hot shoulder jewel. Informally called the “stonewashed cargo bag,” it’s made of Tencel, corduroy and suede and comes in two sizes and seven colors. A saddle style, it has a flap — and straps that are similar to Balenciaga’s sought-after pants from spring 2002.