Proenza Schouler's Jack McCollough and Lazaro Hernandez are in Paris this week selling their spring collection -- and whooping it up with fellow designers like Nicolas Ghesquiere. 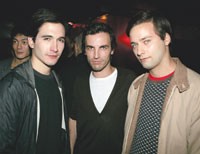 ART AND COMMERCE: Proenza Schouler’s Jack McCollough and Lazaro Hernandez are in Paris this week selling their spring collection — and whooping it up with fellow designers like Nicolas Ghesquière. The duo attended a postshow Balenciaga bash Tuesday at Paris hot spot Le Baron. “Designers don’t cross-pollinate. We meet up behind the scenes and then watch [the shows] on Style.com like all the rest,” quipped Hernandez. As for his take on the Paris fashion scene: “Paris is real fashion, New York is commerce.” The pair partied with the likes of French actress Emma de Caunes and bad-boy rapper Joey Starr.

GOOD BOY: “I’m looking for inspiration,” announced Joel Madden, the lead singer of the band Good Charlotte, as he arrived at the Lagerfeld Gallery show Wednesday morning. Madden is in Paris with girlfriend Hilary Duff, who is promoting her new album. In the meantime, the tattooed Madden said he’s “wandering” Paris on his own — at least when he’s not holed up at the Plaza Athénée contemplating his view of the Eiffel Tower and strumming his acoustic guitar. “I’m been writing new songs in the hotel,” he said. “Inspiration often comes when I’m out of my usual environment.”

WORD UP: H&M and Stella McCartney remain tight-lipped about plans for promoting the forthcoming H&M by Stella McCartney collection. Last month, H&M scuttled a print and television campaign featuring Kate Moss because of the company’s “clear dissociation of drugs” and said it would replace the campaign “in some way.” But according to sources, several options are being considered for the Nov. 10 launch, including a logo-driven campaign and a replacement model: the popular and vivacious model Mariacarla Boscono. Asked about the rumblings on Wednesday, Boscono declined all comment.

FAMILY AFFAIR: Expect Bernard Arnault, chairman of LVMH Moët Hennessy Louis Vuitton, at the Celine show today. Although he doesn’t always make an appearance at his smaller houses, he balked at that suggestion after Givenchy Wednesday. “I’m interested in all my brands, always,” he said after Riccardo Tisci took his bows. And the pope of fashion’s verdict on that show? “Super,” he replied.

SWEATER SET: “Ooh la la, not another model-turned-actress,” laughed Audrey Marnay over coffee Wednesday at Café Marly. Yes, the quirky French beauty is the latest to tackle the silver screen.

The 25-year-old mother of two stars in “Bunker Paradise” by Belgian director Stefan Liberski, in which she plays a lovelorn bourgeois party girl. The film is scheduled for release in French theaters in December. “I really got into the character,” Marnay said.

Not that it was all smooth sailing.

“They got the wardrobe all wrong,” she said. “They brought me a mohair sweater. I said, ‘Listen, a rich bourgeois woman doesn’t wear mohair; she wears cashmere.'”

Though she still walks the runway — but only for Chanel — Marnay knew she was headed to film long ago and took acting classes in New York and Paris. “I was waiting for the right role,” she said. “I definitely didn’t want to play a model.”

Already, Marnay has wrapped a second feature with Liberski — what she called “a Japanese road movie” — and she’s scouting for more work. “I’d like to do it all,” she said. “Comedy, action, drama. Like John Travolta. I want a career like that, too.”

CROSS ROADS: Home is where the heart is. Make that Chrome Hearts. That’s certainly the case for Karl Lagerfeld, surely one of the biggest customers for its sterling silver jewelry and belts. The California firm set to open a boutique on Avenue Montaigne in Paris in the spring, meaning the designer will have another destination besides Christian Dior on the tony shopping strip.

REALITY TV: “It’s a public lynching,” Carré Otis said of the Kate Moss affair at the Givenchy show Wednesday. “The same thing happened to me. She’s an icon; she’ll be fine, even if it doesn’t seem that way when you’re reading about your personal life in the papers.” Otis flew in from San Francisco, where she is finalizing a new television series with 20th Century Fox. Titled “Marin Diaries,” the show tells the tale of Otis’ life before the start of her modeling career in Marin County, California. “It will probably be on cable. It’s too gritty for the regular channels. I didn’t want it to be like ‘90210.’” Further down the row, Julia Restoin Roitfeld was taking a break from her studies at The New School of Design at Parsons. “You can’t get a good crepe in New York,” quipped Roitfeld, who has been busy interning for photographer Craig McDean.

COSTUME DEPARTMENT: While she may be used to charming audiences, French singer Arielle Dombasle is also quite the fashion groupie. “He used to design my costumes at the Comédie Française; he is immensely talented,” gushed Dombasle of Vincent Darré at the Emanuel Ungaro show on Wednesday. Dombasle said she was busy preparing for her concert on Nov. 5 at the Thèatre des Champs Elysées, the proceeds of which will go to the association Reporters Without Borders. Meanwhile, Dianne Picasso was taking a break before heading to New York for the launch of her book Nov. 1, an event organized by Calvin Klein.

EYE SPY: Designer Jean-Charles de Castelbajac made his eyewear launch Tuesday a rock ‘n’ roll affair. French New Wave band “The Film” whipped up a frenzy for an artsy crowd, among them André Putman and Casey Neistat — one half of the mischievous moviemakers the Neistat Brothers — who popped in for a boogie. “You can’t have fashion without music,” said Castelbajac, reminiscing about the time he saw John Lennon decked out in one of his blanket coats. A 30-year retrospective of the kooky designer’s work is scheduled to show at London’s Victoria & Albert museum Jan. 1 through April 30.

BOOKING ALABAMA: Project Alabama founder Natalie Chanin is spinning her down-home ways into a how-to book for Stewart, Tabori & Chang. Collaborating — something the label is high on — will be a hefty part of the book, which is slated to be released for fall 2007.

Aside from learning how to stitch together Project Alabama’s signature corset, readers will pick up tips for piecing together garden trellises, quilts, tablecloths and bouquets. Recipes will also be part of the mix, like the one for Depression-era soup from 82-year-old “Ms. Jessie.” She picked that up from a government-issued pamphlet she found at one of the local canneries set up in the Thirties.

Chanin has her own tie to Uncle Sam. The U.S. Department of Labor helped her develop a new system for operating a business in a cottage industry style, by allowing workers to work at home or wherever they choose. “They do the job they want to do and they do it when they want to do it,” Chanin said. “The book is a little bit about empowerment, too.”