Fashion Scoops: As the CFDA Turns … Dogs on the Catwalk … Red Hearts …

AS THE CFDA TURNS: If Joseph Abboud is interested in becoming the next president of the Council of Fashion Designers of America, he’s going to have to wait it out. Stan Herman, who has served as... 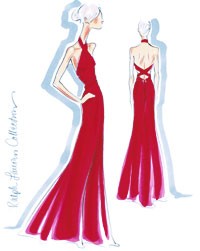 AS THE CFDA TURNS: If Joseph Abboud is interested in becoming the next president of the Council of Fashion Designers of America, he’s going to have to wait it out. Stan Herman, who has served as president of the CFDA since 1991, said he plans to stay in the role until October 2006.

“I was reelected at the board meeting last week for a one-year term, which is up in October. I wanted another year to finish up what I have to finish,” said Herman, who got the board’s OK to stay on another year. “Joseph [Abboud] has expressed an interest, and I’m going to be watching him.”

“I love it, and I’ve done a good job,” added Herman. “I’ve been looking very carefully for the next one, somebody who gives it time and effort. Peter [Arnold, executive director of the CFDA] is very hands-on, and the balance has to work.”

Although Abboud is the only designer who has expressed interest in the unpaid position, Herman said there has to be a vote, and potential candidates must go through the nominating committee and get board approval.  “A year and a half is a long time away,” he said.

Abboud, meanwhile, had no comment, except to say: “I’m on the board. I have such a confidence in the American designer community and am proud to be part of it.”

DOGS ON THE CATWALK: It seems the kids walking in Child magazine’s fashion show in the tents at Bryant Park on Feb. 7 will now have pets to play with. Target is continuing its New York branding push and is said to be organizing a canine fashion show on Feb. 11 during the 7th on Sixth shows. (Two seasons ago, Target stationed dressed dogs outside the tents but this time the pooches will apparently be strutting down the runways inside.)

The question remains, though, whether the pups or the kids will be better behaved.

RED HEARTS: The Duchess of York, Sarah Ferguson, has been known to be a bit fiery, so it’s fitting she will hit the catwalk in The Heart Truth’s Red Dress Collection fashion show on Friday. The royal will don a red Ralph Lauren halter dress. Twenty other notables — including Sheryl Crow, Paula Abdul, Christie Brinkley, Vanessa Williams, and Venus Williams — will model red dresses for the nonprofit organization, which promotes heart disease prevention among women. First Lady Laura Bush should be in the crowd, sharing a row with Oscar de la Renta, Carolina Herrera and a heart disease survivor.

At a press conference earlier in the day, Fergie and the First Lady will talk up The Heart Truth’s recent achievements, including new partnerships with media outlets such as Essence magazine. Odds are the diplomatic duo will opt for red attire. Friday is National Wear Red Day.

TAHARI ON THE MOVE: Elie Tahari is a busy man these days. Not only is the designer putting the final touches on his fall collection, he moved from the Grace building to temporary digs at 11 West 42nd Street last week. And he has more tricks up his sleeve: He’s working on a men’s wear collection and even contemplating an accessories line.

Buyers and editors will get a glimpse of the new offices and showroom on Feb. 9 when Tahari is throwing an open house to celebrate the move and introduce his new fall collection. This is a first for Tahari, who typically preferred intimate market appointments to big collection presentations.

As for a new permanent home, Tahari is in negotiations to take over the building adjacent to 510 Fifth Avenue, where his design, merchandising and production teams are located. He is hoping to move his entire operation there if the deal comes through.

TOO FAST FOR LOVE: As of press time, Kate and Andy Spade were still awaiting the arrival of their firstborn, though they’d just marked another milestone of sorts. The couple appears on the next cover of Fast Company magazine — the first time a visibly pregnant executive has ever graced the cover of an American business magazine, according to Fast Company editor in chief John Byrne.

To welcome the expected-at-any-moment baby Spade, and also to thank the couple for participating in the March cover story, Byrne was sending them an iPod Shuffle loaded with “lullabies” from Frank Sinatra, Ella Fitzgerald and the Allman Brothers Band, as well as Burl Ives’ “Big Rock Candy Mountain.”

IT’S NOT YOUR MOTHER’S TOILE: If you think the fabric on one of Tuleh’s coats is all innocent scenery, take another look. At the house’s show on Sunday, a blue and brown cloque scenic will feature naked girls frolicking in place of the traditional country scene that was originally created for the look by the mill, Gentili Mosconi. Thanks to a special collaboration between the mill and Tuleh’s Bryan Bradley, the new R-rated version was created just in time for fashion week.

AFTER THE SHOW: Jessica and Jerry Seinfeld will be throwing a bash for Narciso Rodriguez at 49 Grove after the designer’s fashion show Tuesday. Gary Robins will take a night off from The Biltmore Room to cater the party. Zac Posen will be headed uptown to celebrate after his show. John Demsey, Sandra Brant and Ingrid Sischy will be toasting him at the Four Seasons restaurant.