AT LAST: Capping 11 months of market speculation, Coty’s Lancaster division is expected to reveal today that it has signed actress Sarah Jessica Parker to a fragrance licensing deal. The rumor gained serious... 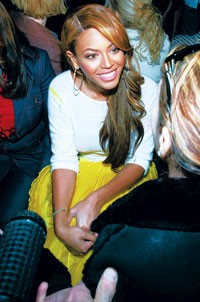 AT LAST: Capping 11 months of market speculation, Coty’s Lancaster division is expected to reveal today that it has signed actress Sarah Jessica Parker to a fragrance licensing deal. The rumor gained serious traction Monday when the cosmetics company sent a media alert to major publications promising “the first licensing agreement for this internationally known actress and style icon.” It also noted the fragrance will be out this fall, and will “reflect the talent, style and confidence of which she has become a symbol.”

Parker would be in heady company at Coty — which, between its prestige and mass divisions, holds the licenses from Jennifer Lopez, Celine Dion, Kimora Lee Simmons for Baby Phat, Isabella Rossellini and Mary Kate and Ashley Olsen. Coty declined to name the celebrity Monday.

EAU DE TOM?: Speaking of fragrances, speculation is heating up in Europe that Tom Ford’s next project could be a signature scent. The former Gucci creative director recently hinted he had a project cooking that has “nothing to do with ready-to-wear.” Some sources already connect any forthcoming Ford scent to Procter & Gamble, which holds the license to Gucci beauty products, while Domenico De Sole, former chief executive of Gucci Group, sits on the P&G board. A P&G spokeswoman dismissed the rumor. “We have a strong and positive relationship with Domenico De Sole and Tom Ford, but we have no shared business interest beyond this right now,” she said.

BLOCK PARTY: Bernard Arnault is trading places. Rumor has it the LVMH Moët Hennessy Louis Vuitton luxury baron, who currently lives in Paris’ 16th arrondissement, has written a check to buy Bethy Lagardere’s town house on the tony Rue Barbet de Jouy, on the Left Bank. The sumptuous digs are next door to Emanuel Ungaro and down the block from Jil Sander’s pied-à-terre. Such neighbors don’t come cheap. Sources say Arnault shelled out about $32 million, or 25 million euros.

HILTON FEVER: The Sisters Hilton drifted into Luca Luca’s Sunday night show, setting off camera flashes worthy of Grucci fireworks. Even nonmedia attendees got into the swing of things after the lights went down, using their cell phones to snap shots of Paris and Nicky. Backstage after the show, the pair were still being blinded by the lights. As her sidekick chatted on a cell phone, Nicky Hilton speculated about their impact on fashion. “Hopefully in some way [we impact fashion],” she said, applying lip gloss as she walked toward the photographers. “I am a designer.”

So what did Salman Rushdie, who was standing away from the fray, make of Hiltonmania? The author, who was with his wife, Padma Lakshmi, said, “I try not to think about it at all. It’s not quite my neck of the woods.”

Out after a long hibernation required to wrap up a new novel, Rushdie said he averages two shows. “That’s about enough in my view.”

KARL IN TOWN: Those who claimed to have had a Karl Lagerfeld sighting in New York weren’t hallucinating. Lagerfeld was in town last week shooting a story for French fashion magazine Stiletto. His presence only served to heighten the rumors surrounding the Lagerfeld biography Cathy Horyn is said to start working on when she relocates to Paris next year. At one point, an editor even heard that Lagerfeld was staying with Horyn in Garrison, N.Y. Horyn couldn’t conceal her amusement at all the chatter. No, she said, Karl wasn’t staying with her and, “for the record, I am not doing a book on him.”

BEYONCE BASH: In accordance with the recent trend, celebrities continue to wreak havoc on fashion week. As the lights went down at Oscar de la Renta, Beyoncé Knowles joined the socialite-dominated front row and sent the media frenzy into an even greater uproar. Flanked by mother Tina and publicist Paul Wilmot — and protected by her house-sized bodyguard, suitably named “Shorty” — she said she is busy working on a small holiday collection for her fledgling label, The House of Deréon. Also in the works are plans to develop a fine jewelry line, which seems appropriate given that both Beyoncé and Tina were sporting serious bling. As soon as the house lights were illuminated, a scramble of photographers rushed to their seats, shoving some slow-moving Vogue staffers into one Manolo-clad mob. Suzy Menkes, the fashion editor of the International Herald Tribune, was among the near-casualties.

FIRM FAN: Renée Zellweger sat front and center at the Carolina Herrera show Monday surrounded by a throng of bodyguards. “I just love Carolina,” she gushed. Surprisingly enough, although the photographers descended, the crowd hardly seemed to notice her, for not only was she terribly slight, but her simple outfit (a black top paired with jeans) was a clever camouflage against the glitzy backdrop formed by surrounding socialites. In fact, the only noticeable accessory was a diamond-encrusted Cartier watch adorning her wrist. “It was a Christmas gift,” she blushed, “from an unspecified friend.” Looks like she may be over Jack White sooner than we thought.

MAG MAD: Drew Barrymore, the latest cover girl of London’s Another Magazine, was feted by Jefferson Hack, Karen Elson, Tara Subkoff, Eric Villency, Helena Christensen and Natalia Vodianova Sunday night at a dinner at Ono in the Hotel Gansevoort. Barrymore arrived without Fabrizio Moretti, fueling rumors that she’d broken up with the rock star who is said to be in New York at the moment. Still, she proclaimed her appreciation for the magazine, which she’s read since Kate Moss graced the debut issue — “It’s groundbreaking because it conducts its own music.

“I’m kind of a magazine junkie,” Barrymore added. “I love art magazines and I love international newsstands. When I was younger, in the early Eighties, my walls were wallpapered with Interview magazine covers. Halston was still around then.” She’s clearly on a British kick — Barrymore will soon appear in the soccer comedy “Fever Pitch” with Jimmy Fallon.

MOVING BACK?: Is Jason Weisenfeld, Versace’s global communications director, headed back to the U.S. and taking his job with him? Speculation in Milan is mounting over whether Weisenfeld, who joined Versace in 2002, is relocating to New York. One source said he’s set to leave Milan in March, but that he will likely be traveling between Italy and New York for months, continuing to oversee Versace’s corporate press offices and focusing on setting up the New York one. Weisenfeld is mum about the rumor as well as about who will be joining the new U.S. team. As reported, Versace is setting up a New York-based in-house press office, and Paul Beck, the company’s former publicity director and Donatella Versace’s former husband, is said to be taking a post there, in an ambassadorial role, focusing on the men’s division.

WORKING FASHION: A new face in the Diane von Furstenberg front row was Shohreh Aghdashloo of “The House of Sand and Fog” and this season of “24.” (Ellen Barkin, Carmen Electra and Anderson Cooper were also in attendance.) The actress said a friend introduced her to the designer’s wares two years ago, and she’s been a fan ever since. After dinner with von Furstenberg, Aghdashloo was off to the airport to go back to the “24” set. “What can I say,” she shrugged, “I’m a workaholic.”

HIRED GUN: Paris-based designer Martin Grant is learning how to multitask — and how. The Australian, who, in addition to his own signature line, is in charge of designing the in-house label for Barneys New York, recently added a consulting gig to the German house of Joop. Grant also collaborated on a project with the French furrier Sprung Freres this spring.

MUM’S THE WORD: With camera in hand, Isabella Rossellini watched her daughter, Elettra, in action on Catherine Malandrino’s runway Sunday. “This is the first time I am seeing her walk. When she did it in Milano I asked her if she wanted me to come and she said, ‘No,’” Rossellini said with a laugh. “But she is less nervous after a year.”

As for any commentary on the outcome of the upcoming Oscars, she declined, but it had nothing to do with being Ingrid Bergman’s daughter. “I am an Academy member so they ask us not to answer these types of questions,” she explained.

A lesser-known mother-daughter team were at Anne Bowen’s Saturday night show. Lisa Gastineau was ringside to catch her daughter Brittny’s “first big show.” Dressed in a side-splitting silver dress, the elder Gastineau explained they also were filming their new reality show, “The Gastineau Girls,” which debuts Feb. 15 on the E network.

Lisa Gastineau’s ex-husband, former New York Jets player Mark Gastineau, has had his share of show time. Once wed to Brigitte Nielsen, he had her name tattooed onto his buttocks. But the former footballer is probably better known for the onfield dance he’d perform after every quarterback sack. His ex-wife, Lisa, assured there wouldn’t be a trace of that on the runway. “No, my daughter is a lady, and quite a good one.”