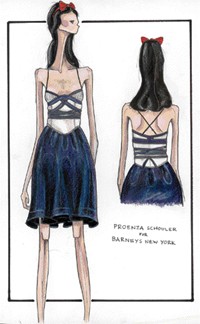 BALI BABY: The first Bulgari hotel hasn’t yet opened its doors, but the location is already set for resort number two. Bulgari Hotel & Resorts, the joint venture created by the Italian jeweler and the luxury division of Marriott International Inc., plans to open a resort in Bali in 2005. Located near the village of Pecatu, the resort will feature 58 individual luxury bungalows. These bungalows, however, go way beyond bamboo.

Most of the units measure 3,230 square feet and include a bedroom, a library, two baths, two closets, a patio and a pool. Three bungalows will have two bedrooms, while one, named Villa Bulgari, comes in at a sprawling 17,220 square feet with three bedrooms and separate servant quarters. Spa, private beach, two restaurants and a Bulgari shop for those last-minute baubles complete the resort. Bulgari’s first hotel venture is set to open next year in Milan.

SEX IN THE WINDOWS: You can always count on Barneys New York to take a tongue-in-cheek approach to all its endeavors — especially its holiday windows. And this year it’s an elaborate tribute to the stars of “Sex and the City.”

“It’s the perfect time to pay homage to the girls because their last season is coming up,” said Simon Doonan, the store’s creative director. “It’s also fitting because they are a New York institution and so are Barneys’ windows.”

To that end, Barneys commissioned au courant designers to create gowns for the caricatures of the actresses like Proenza Schouler for Kristin Davis, Behnaz Sarafpour for Sarah Jessica Parker, Zac Posen for Kim Cattrall and Isabel Toledo for Cynthia Nixon. Besides installing the windows, which go in this week, the tireless Doonan has been running Polaroids of his progress to the “Sex” set because the stars have been clamoring to see the installations. “These girls are the most enthusiastic chicks I’ve ever worked with,” said Doonan. “And they were dying to get a look at the sketches of the frocks.”