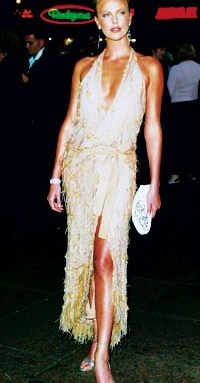 BEAUTY IN WAITING: Is Charlize Theron the next beautiful actress to jump on the beauty bandwagon? Sources indicate Dior is close to inking an agreement with the recent Oscar winner to be the new face of its J’Adore fragrance. Dior executives in Paris could not be reached at press time on Thursday, but it would fit in with the latest beauty trend of signing big names. First came Chanel and Nicole Kidman, then Tommy Hilfiger and Beyoncé and then Calvin Klein signed Scarlett Johansson.

COOL CITY: Peter Saville, Britain’s influential graphic designer-art director, has just taken on an unusual makeover job: creative director for the city of Manchester. Ostensibly, Saville, who last year had a retrospective of his work at London’s Design Museum, will be charged with rebranding the city and giving it a hip visual identity. “I will be looking at my hometown and figuring out where it can be better,” said Saville. Though London-based now, Saville is a founder of Factory Records and best known for the album covers he designed for Joy Division and New Order while growing up in the northern industrial city. Recently, he has created a line of men’s knitwear for London’s Clements Ribeiro label and later this year an exhibit dedicated to his work will open in Dijon, France. Saville has also done art direction for such houses as Givenchy, Stella McCartney and Yohji Yamamoto.

LOUIS, LOUIS: As Louis Vuitton marks its 150th anniversary this year, French journalist Stephanie Bonvicini just published a book retracing the brand’s storied history from the birth of its eponymous founder in 1821 to the present. “Louis Vuitton: A French Saga,” published in Paris by Fayard, documents historic events in the house’s past, including the baggage it made for the French emperor’s wife, Eugenie, its conquest of the U.S. market and the Vuitton family’s much-criticized relationship with the collaborationist Vichy government in World War II. Among the other touchy subjects the unauthorized book examines is luxury mogul Bernard Arnault’s hostile ousting in the late 1980s of then-Vuitton chairman Henry Racamier, who had married into the Vuitton family and engineered the brand’s early global growth.

SKY HIGH: Talk about your high-flying fashion party, complete with two needle-nosed Concorde jets parked on the dance floor. That’s how Cartier feted the 100th anniversary of its Santos wristwatch Wednesday night, hosting a lavish dinner at Paris’ Le Bourget airport. Celebrity guests, some of whom jetted in for the occasion, included Monica Bellucci, Jeremy Irons, Jean Reno, Lord Frederick Windsor, Sir Terence Conran, Sophie Dahl, Marc Newson and, intriguingly, cerebral novelist Paolo Coelho. “I love these planes,” offered Irons, who has just wrapped shooting director Ridley Scott’s “Kingdom of Heaven” and “The Merchant of Venice” opposite Al Pacino. “I used to do quite a bit of flying myself. But it’s too small in England to make it worth the while. If I ever moved to Hollywood I’m sure I’d take it up again.” While Irons may be staying put for the moment, Cartier certainly isn’t. It has three other parties scheduled to mark the anniversary of the Santos, including gatherings in New York and Tokyo next month and an event in Rio de Janeiro in June.

TASTE IN SPADES: When someone like style crusader Kate Spade writes a book on manners, it sets a certain standard for her party guests. “I brought Kate some Magnolia [Bakery] cupcakes,” Cynthia Rowley offered immediately upon her arrival at the party Wednesday night to celebrate the launch of Spade’s trio of books — “Style,” “Manners” and “Occasions,” being released next week by Simon & Schuster. Everything from the subtle nuances of a well-made umbrella to what to do when the chocolate souffle falls is addressed with signature Spade flair.

The party, co-hosted by In Style, was held at the National Arts Club in the Tilden Mansion in New York’s Gramercy Park, which at first left Spade feeling a bit unnerved. “When Robin [Marino, president of Kate Spade] and I walked in for the first time, she said, ‘It looks like ‘The Shining,’” Spade said of the grand manor. “I said, ‘Perfect, we’ll fit right in.’”

While Stanley Kubrick’s 1980 horror flick may not be the first film one would free-associate with Spade, after an NAC governor “pinned” her as an honorary member, she did fit right in. Fellow NAC member Kenneth Jay Lane toasted Spade and, when razzed by a friend for rarely drinking or dining at the club, he responded, “I have a good cook.”