BEENE THERE: Geoffrey Beene’s three-bedroom Long Island house is on the block for $4.9 million. The fact that the famously private designer lived on the 15-acre Oyster Bay Cove hideaway has attracted “quite a few”... 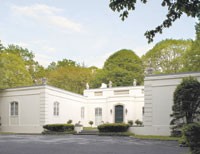 BEENE THERE: Geoffrey Beene’s three-bedroom Long Island house is on the block for $4.9 million. The fact that the famously private designer lived on the 15-acre Oyster Bay Cove hideaway has attracted “quite a few” people to inspect it, said Barbara Candee, Sotheby’s international realtor director for the North Shore of Long Island and vice president of Daniel Gale Real Estate. Money from the sale will benefit the Geoffrey Beene Foundation, as is also the case with Beene’s New York City apartment, she said.
Beene once told a television interviewer, “Home, to me, is privacy…and I found the house like a refuge almost. It’s so quiet here.”
His mother lived with him for a spell in what he described as the “For Ladies Only” room, an 18th-century paneled sleeping enclave with pink satin furnishings. The neoclassical Paladin style country getaway also has the large greenhouse where Beene nurtured 20,000 orchids. But it’s the swimming pool with a walled garden that has piqued potential buyers’ interest, Candee said.
“As one customer said, ‘Oh my goodness, you could go skinny-dipping here.”

BELGIAN TIES: Anne Chapelle, who already owns stakes in Ann Demeulemeester and Dirk Schonberger, is about to enlarge her stable. Word has it Chapelle is finalizing a deal with Antwerp-based Haider Ackermann to back his fledgling label. Reached late Friday, a spokeswoman for Ackermann in Paris declined all comment.

LADIES LUCK: Although the tale of how Maggie Rizer’s stepfather gambled away his stepdaughter’s savings has been heavily reported in both broadcast and print, the model followed through with her duties as hostess of Viva Glam Casino Veneziano Wednesday night to benefit Design Industries Foundation Fighting AIDS and sponsored by MAC. She, of course, got nowhere near the blackjack tables herself, but her pals Jacquetta Wheeler, Mini Anden, Ines Rivero, Richie Rich and André Leon Talley laid down a chip or two. The night also drew some unexpected talent like Oksana Baiul and Star Jones Reynolds, who took advantage of the panini and pasta bars and helped to raise over $400,000 for DIFFA.

FOWL-ANTHROPY: After the restoration of the Trois Fontaines Bosquet in the gardens of France’s Chateau de Versailles, The American Friends of Versailles is eyeing a fund-raising effort to renovate the French Pavilion. Built by the legendary architect Gabriel, the pavilion, originally constructed to be a royal chicken coop, faces the Petit Trianon in the palace’s gardens. “[These gardens] represent Versailles’ feminine side,” quipped Chicago philanthropist Catharine Hamilton at a dinner she hosted under the Pavilion’s dome’s last week. Meanwhile, across the garden, the Pavilion Frais (or Cool Pavilion, in English), is also a potential candidate for a makeover.

WHITE OUT: Leave it to the designer brigade to dress up the easily identifiable white iPod. Marc Ecko has rallied Donna Karan, Sean John, Betsey Johnson, Carmen Marc Valvo, Cynthia Rowley, Judith Leiber and others to create one-of-a-kind creations that will be auctioned off Wednesday night at Ecko’s offices to benefit Fashion Targets Breast Cancer.

CHINA EXPRESS: Han Feng and Vivienne Tam are among the movers and shakers being flown to Hong Kong by Departures magazine for a photo shoot next week. The stylish group will be featured in the magazine’s October issue shot that will be shot at the China Club. Naturally.