BERGE ON PAPER: Never one to rest on his laurels, Pierre Bergé, the Yves Saint Laurent dean, has yet another project. “I’m writing a new book,” he confided over lunch at Prunier, his caviar restaurant in Paris.... 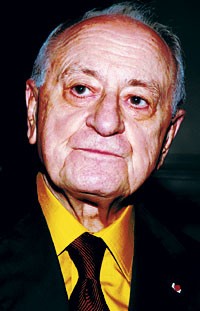 BERGE ON PAPER: Never one to rest on his laurels, Pierre Bergé, the Yves Saint Laurent dean, has yet another project. “I’m writing a new book,” he confided over lunch at Prunier, his caviar restaurant in Paris. Bergé said the tome’s subject — a commentary on literature, art and social mores — came to him when he read a passage in André Gide’s journal in which the Nobel Prize-winning author said he would have liked to rewrite Jean de la Bruyère’s 17th-century masterpiece, “The Characters.” Bergé said, “Gide and La Bruyère are the inspiration. It will be a regard on the century’s society and art.” Last year, Bergé published “Les Jours S’en Vont Je Demeure,” portraits of famous people he has known. It’s being readied for a paperback edition in France.

MOVIE MOVES: A month after screening his first short film, “Traffic Jam,” which he made with Emanuele Della Valle, Francesco Carrozzini, son of Vogue Italia editor Franca Sozzani, will unveil his second moviemaking project at Switzerland’s Locarno International Film Festival in August. “Twisted Tango,” which Carrozzini did with Tommaso Cardile, is a five-minute short featuring the sensual dance moves of Eva Herzigova and Bryan Adams. Carrozzini said he is thrilled to participate in Europe’s equivalent of the Sundance Film Festival, especially since he’s heading to New York in the fall to study film at New York University. “Traffic Jam” followed a day in the life of a fashion editor. “Twisted Tango” is offering up steamier fare, with lots of closeups of Herzigova’s body’s curves. “It’s very seductive,” he said.

GOING ONCE: The late famed publicist Eleanor Lambert was not one to shy away from attention, so she might be pleased to know some of the belongings from her New York apartment will be up for grabs at Christie’s October House Sale. Art, furniture, fine and costume jewelry, books and rugs will be among the 300 items up for bids Oct. 5-6 at the Rockefeller Center auction house. A Cecil Beaton watercolor, a carved porcelain figure of a seated lion, a set of Chinese triangular stacking tables and a Regency pen-work jewelry casket are the standouts. A Louis Kingwood commode, which is expected to fetch between $7,000 and $10,000, and an eglomise and smoked-mirrored six-panel screen, which is expected to draw between $8,000 and $12,000, also will be up for grabs.

RED GOWNS: For Glamorama, Marshall Field’s biggest fashion extravaganza/fund-raiser of the year, 30 designers including Zac Posen, Stella McCartney, Marc Jacobs and Michael Kors have each created a one-of-a-kind red gown for the grand finale, which is being styled by “Sex and the City” wardrobe alum Patricia Field. The event will be staged twice, in Minneapolis Aug. 6, at the State Theater, to benefit the Children’s Cancer Research Fund, and Aug. 13 in the Chicago Theater, to benefit The Art Institute of Chicago. The gowns will be auctioned for the charities. The event will also include performances by Patti LaBelle, The Commodores and Sheila E, an appearance from model Jerry Hall and a video appearance by Jennifer Lopez.