BLONDE AMBITION: There’s a new calm attitude chez Versace these days. The ultrasvelte Donatella clocks in every morning by 10, getting straight to work. She’s also changing her collection m.o. just a bit. In addition to... 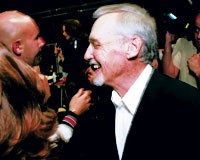 BLONDE AMBITION: There’s a new calm attitude chez Versace these days. The ultrasvelte Donatella clocks in every morning by 10, getting straight to work. She’s also changing her collection m.o. just a bit. In addition to showing only Versace and not Versus, she has not invited a single celebrity to grace her front row on Friday night, and has ditched her traditional post-show megafete. “I went back and forth about celebrities, but decided that I really want to focus on the clothes only,” Versace said Wednesday. “Besides, there were enough stars in New York.” After the show, an intimate dinner for 40 or so at her apartment will replace the traditional bacchanalian festivities.

Other changes are in the works as well, including refocusing and renaming the house’s secondary lines under a new, to-be-determined label, and moving the design staff from Via Gesu to expanded quarters at the company’s headquarters on Via Manzoni, with Gesu being converted to a showroom. “After the departure of Tom and Dom, everybody kept looking to us for news,” said a staffer. “Now we really have a lot going on.”

BIRDS OF A FEATHER: It looks like Daphne Guinness, a recent contributor to Tatler magazine, has landed a bigger fashion assignment. Way bigger. Word has it the ultrachic brewery heiress has been tapped by François Henri Pinault as a special fashion consultant for Gucci Group. The scope of her responsibilities could not immediately be learned, but it is understood she will lend her unerring eye to various brands. She’s certainly no stranger to many in the group, as she counts Alexander McQueen among her London friends. Neither Guinness nor Pinault’s representatives could be reached for comment.

PRESLEY POWER: Dolce & Gabbana made their fair share of Elvis references at their D&G show Tuesday. Word has it the duo might be ready to focus their attention on the women in the King’s life. The designers are said to be reuniting Priscilla Presley, Lisa Marie Presley and her daughter, Riley Keough, who last season walked the runway for the designing pair. The three are expected to sit front and center at the show Friday and attend an evening party at Dolce & Gabbana’s new Via Della Spiga flagship to celebrate a limited-edition tome called “Music,” featuring photos of musicians wearing the designer label through the years.

DRESS CODE: Karl Lagerfeld’s request that photographers wear black suits and white shirts to his Chanel show next week in Paris is irking many a tripod holder, with some calling for a strike — and others holding out for free clothes. “If he gives me a suit, I’ll wear it,” said Bruno Rinaldi, a shutterbug for Italian Vogue who bears a passing resemblance to Jerry Garcia. For now, he’s mulling the prospect of turning up for the show in an English derby to protest: “That I have to go out and buy a jacket and pants for this is just wrong,” he said at the Fendi show Wednesday. Pit regular Dan Lecca went further, calling the request “a little fascist.” Besides, he’s not sold on the suggested attire, which Chanel says is to match the show decor. “I never wear a white shirt with a black suit because I look like a waiter,” he quipped. Still, not all paparazzi are convinced that Lagerfeld is out of line. “I think it’s wonderful,” said Steve Wood, a freelancer. “I think the photographers are the ones that were bringing the level of everything down. We might as well wear nice clothes.”

COSTUME DEPARTMENT: Dennis Hopper, in Milan for the presentation of Hogan — where his daughter Marin, the former Elle fashion editor, now works on special projects — also took time out to catch the Missoni show Wednesday morning. But he had movies on his mind. He’s about to direct “Genuine Article,” a “caper” starring Elizabeth Hurley. Could he be on the lookout for her wardrobe during Milan Fashion Week? “I’m always looking for costumes,” he said with a chuckle. “But I’m sure Liz Hurley will be looking on her own.”

CROWD CONTROL: Milan’s party scene kicked into high gear Tuesday night as Giorgio Armani hosted a Vanity Fair windup at his subterranean Armani Privé club. While designer Lawrence Steele was freaking out to Le Chic on the dance floor, Armani, dressed in a mandarin jacket, schmoozed a crowd thick with retail heavyweights. The possibility of rubbing elbows with a Guess girl at the firm’s hot-ticket 20th anniversary party across town caused a mob scene outside Spazio Strato. As the crowd to get in swelled, an impromptu street party got under way. So who needs Paris when you’ve got Milan?

KEEPING IT SURREAL: Tod’s chief Diego Della Valle plans to entertain the fashion crowd Friday — and show off his latest wares — with a surreal presentation staged by Dante Ferretti and inspired by Giorgio De Chirico. The renowned set decorator, who collaborated with Della Valle last season in re-creating an Italian garden complete with statues, will reproduce some of the most famous Italian squares to reinforce the company’s link with the “Made in Italy” tradition.