Fashion Scoops: Blonde on Blonde … Smells Like Trouble … Anatomy of a Rumor …

BLONDE ON BLONDE: A mountain of paparazzi awaited the arrival of pint-sized pop vixen Christina Aguilera at the Versace show Tuesday night. Seated next to her stylist and an imposing cadre of bodyguards, Aguilera gave Versace a standing ovation at the... 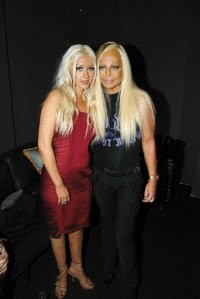 BLONDE ON BLONDE: A mountain of paparazzi awaited the arrival of pint-sized pop vixen Christina Aguilera at the Versace show Tuesday night. Seated next to her stylist and an imposing cadre of bodyguards, Aguilera gave Versace a standing ovation at the end of the show. “Donatella is an amazing designer,” she said. “The dresses were amazing. I love her stuff and I respect her as a strong female in the business.” As soon as Versace exited the runway, the music cranked up again and the show segued into a party. But after a quick and private fish dinner backstage, the two blondes decided to carry on their fun elsewhere — or maybe not. “It’s been a long day, so everyone went home,” said a Versace spokesman.

SMELLS LIKE TROUBLE: The first Viktor & Rolf fragrance, licensed to L’Oréal, isn’t slated to come out until 2005. But it’s already causing a stink. According to sources, L’Oréal is “furious” that the packaging for the new Alexander McQueen fragrance, due out March 17, features a prominent red wax seal, similar to the Dutch duo’s logo. The designers, preparing for their show on Saturday, could not be reached for comment. However, Domenico De Sole, chairman of Gucci Group, whose Yves Saint Laurent Beaute division launched McQueen’s fragrance, named Kingdom, doesn’t seem to think there’s any real problem. “We have a very cordial relationship with L’Oréal,” said De Sole, who happens to be sailing buddies with L’Oréal chief Lindsay Owen-Jones. But lawyers might have to get in the middle of this one. “They believe there is a trademark infringement,” said De Sole. “Our lawyers say there isn’t.”

ANATOMY OF A RUMOR: One bit of gossip making the rounds in Milan this week has centered on the possibility of Narciso Rodriguez taking over the design of the Calvin Klein collection in its new Phillips-Van Heusen controlled era.

Not so fast. A spokesman for Rodriguez reached the designer during his Carnivale vacation in Rio de Janeiro on Tuesday and said it’s simply not true. “The only thing Narciso is focusing on right now is his business,” the spokesman said. “He’s not talking to anybody about anything.”

The rumor still managed to reach the ears of several top retailers, who were more enthusiastic about the prospect. That’s because Rodriguez was an assistant designer to Calvin Klein and also designed his coat collection for many years, before designing for Cerruti and Loewe and launching his own brand in 1997. But given the success of Rodriguez’ last two collections, and that his collection partner is Aeffe, which owns half the business, the possibility seems remote. This seems particularly likely since Aeffe owner Massimo Ferretti came back from Rodriguez’ last show with what insiders described as a hefty stack of orders.

THREE’S COMPANY: When times are tough, the tough go shopping. WWD has learned that three former heavyweights from Texas Pacific Group have formed a club fund, HMD Partners, to invest in medium-sized, European fashion, retail and branded consumer goods companies. Abel Halpern, the former European head of TPG; Federico Minoli, the former chief executive of Bally — which is owned by TPG — and the lawyer Peter Darrow, plan to invest in companies with revenue between $100 million and $750 million. Their money will come from a pool of private European, Asian and Middle Eastern families. The fund is said to be looking to spend $25 million to $75 million for each transaction. The three are currently plotting their first deal, but could not be reached for comment.

ON THE PROWL: HMD Partners isn’t the only group looking to invest in fashion. Gibò, the Florence-based clothing manufacturer that helped transform Viktor & Rolf, Hussein Chalayan and Paul Smith into commercial businesses, is also hunting for acquisitions. “For years we worked behind the scenes, building businesses for other brands. Now it’s time to focus on our own,” said Gibò chairman Franco Penè. Gibò is looking for clothing and accessories companies with specialized production know-how. “We want special, niche products made by skilled hands. And we don’t want to be the Procter & Gamble of fashion — we want to be the Ferrari,” said Penè, who plans to draw his cash from banks and private equity funds.

THE NEW YORKER: Donna Karan may have worked the Paris couture last July, but that doesn’t mean she’ll be planting retail roots in Paris anytime soon. A prime spot on tony Avenue Montaigne — soon to be vacated by Louis Vuitton — had been earmarked for Karan, whose company is part of the LVMH Moët Hennessy Louis Vuitton fashion group. But sources in Paris say she might not move in after all. It turns out LVMH is shopping the space around to competitors, instead of the other brands in its stable. One designer who’s eyeing the space: Giorgio Armani.