Marc Jacobs and Debbie Harry have been close friends for close to two decades. 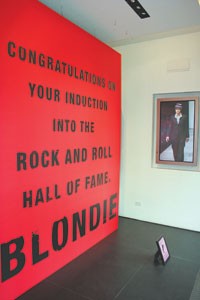 BLONDIE SNAPSHOT: Marc Jacobs and Debbie Harry have been close friends for close to two decades — so close, in fact, that last Thursday, Jacobs flew in from Paris to congratulate Blondie on its induction into the Rock and Roll Hall of Fame and to co-host a party with political activist Jonathan Lewis in the group’s honor. “I have known Blondie ever since they started to make music,” Jacobs said. “I met Debbie in my late teens or early twenties. We became friends and I have worshipped her and her music since.”

Jacobs has dedicated the windows of the Marc by Marc Jacobs boutique on Bleecker Street to the music icon. Since late last week, they feature giant vinyl screens, one of which has an image of Harry and the other, a congratulatory note on the induction. The boutique is also selling $20 Blondie T-shirts, with proceeds going to Riverkeeper, Harry’s organization of choice, which keeps an eye on the Hudson River’s ecosystem and fights its polluters.