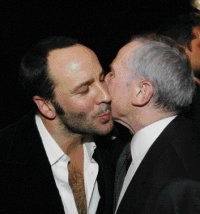 BODY LANGUAGE: Sure the steamy, boudoir clothes at Yves Saint Laurent on Monday night grabbed attention. But all eyes also were trained on François Pinault, majority shareholder of Gucci Group, to see how he might react to Tom Ford’s latest creations amid the endless speculation that Ford and Gucci Group boss Domenico De Sole could bolt next year if their autonomy isn’t honored by Pinault. After the show, Pinault sped backstage and embraced Ford warmly. It was a Kodak moment. Those looking for clues earlier in the day were interested to see Pinault and De Sole flank to flank in the front row at Stella McCartney. They smiled for photos and chatted. What about? “We talked about a lot of things,” De Sole said. “We’re friends. We’re not enemies.”

QUICK-CHANGE ARTIST: Maryvonne Pinault, wife of François Pinault, is a hyper-discreet presence on the fashion scene, shunning publicity and dressing in quiet fashions. But she attended Stella McCartney and Chanel back-to-back Monday morning in completely different outfits. “No, it’s not what you think,” she said later at Yves Saint Laurent, explaining the switch from a burgundy dress to black leather jacket in under an hour. “Really, it’s just that I live close by, and I was cold.”

SIDELINED: There are few major celebrities in Paris as fashion week winds down. But no matter: Supermodels of yore are keeping the paparazzi snapping. Kate Moss made two more front-row appearances on Monday, for Stella McCartney and Louis Vuitton, while Linda Evangelista and Nadja Auermann fought through battalions of cameramen to get to their seats at Chanel. Auermann was, in fact, on the catwalk Sunday night at the Y-3 show. “But no one probably noticed, because they put a hat on me,” she said with a laugh.

Evangelista, who made a catwalk comeback for Dolce & Gabbana during Milan Fashion Week, quickly realized that the runway is easier to negotiate than the crush of editors and buyers on its perimeter. “Is that what you have to go through to get into these shows?” she asked incredulously. Once settled, however, she was tickled to see legendary model Pat Cleveland grooving down the Chanel catwalk, led by her children Anna and Noel. “She’s so genius,” Evangelista said of the eldest Cleveland. “I love the spirit of her. She’s like a 16-year-old.”

FASHION FAITHFULL: Marianne Faithfull has been recharging her batteries with a little fashion, attending Sonia Rykiel, Stella McCartney and Chanel. Back in Paris after completing a tour, Faithful just started writing new material. And she said it won’t be as lighthearted as what’s been coming down the runways. “It’s going to be a little dark this time,” she said on the sidelines of the McCartney show. “With everything that’s going on in the world right now, I think it should be.” Meanwhile, actress Thandie Newton, also front row, said she traveled from London Sunday afternoon to support Stella, too. “It’s great when you love the clothes your friends design,” she said.

INTERNATIONAL HERALD TRIBUTE: At the Valentino show on Monday afternoon, Suzy Menkes, fashion editor of the International Herald Tribune, was approached by a Paris fashion student, who breathlessly asked, “Can I have your autograph? I read you all the time!” Suzy happily obliged. “Fame at last,” she uttered later. Can a fan club be far behind? You never know. Menkes is the subject of a six-page feature in this week’s issue of The New Yorker.

TEST DRIVE: Louis Vuitton honcho Yves Carcelle had his wife Rebecca draped in jewels on Monday for the Vuitton show. But there’s a hitch: She has to give them back. “It’s a prototype,” she explained, clutching a panda-shaped pendant studded with diamonds and multicolored sapphires. The quirky necklace was inspired by Vuitton’s collaboration with Japanese artist Takashi Murakami. The final design is expected to hit Vuitton stores later this year, priced at about $9,000 to $11,000.

BOB DU JOUR: She may be one of the iconic figures in French film, but some people found it hard to recognize actress Catherine Deneuve as she waited outside the Louis Vuitton show Monday, smoking cigarettes. “It must be my new haircut,” quipped Deneuve to one friend, who almost walked right past her. “I’ve just cut it all off.” The short Twenties-inspired coif, Deneuve explained, is for her latest film project, based on the life of Sigmund Freud, which starts shooting in Vienna this month. “Some actresses get all funny about their hair,” said Deneuve. “They want to wear a wig or something. I couldn’t care a bit. I’ll do anything for an interesting role.”

LADY IN RED: Delphine Arnault, the towering, chic daughter of LVMH Moët Hennessy Louis Vuitton chairman Bernard Arnault, made a surprise front-row appearance at Valentino Monday afternoon, seated next to Matteo Marzotto, whose company bought Valentino last June. A year ago, LVMH was considered among the potential suitors for Valentino, but Arnault seemed nonplussed by the fuss about her presence. “I sometimes go to other shows,” she said. “I don’t have any Valentino dresses, but I think they’re great.”